THOSE DAGNABIT 70'S KEEP ON COMING BACK LIKE ACID REFLUX OR BETTER YET, LIKE JASON IN FRIDAY THE 13TH AND JOHN ALLEN PROVES IT! 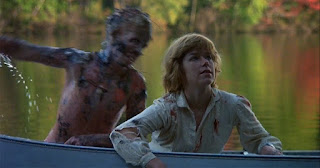 MY COMMENTS FIRST AND THEN JOHN ALLEN'S TIME CAPSULE OF THE 1970'S WHICH WE ARE RELIVING TODAY AGAIN, LIKE A "JASON MOVIE!" The  first two paragraphs below in John Allen's most recent article from CRUX brings it all back to me like that sour taste you get when whatever is in your stomach partially digested returns to your mouth in an unexpected way! Or Jason popping up after he was thought to be dead! Horrible!

Long dead and gone extremely progressive Bishop Raymond Lucker, who unlike nasty, conservative bishops, loved his people and his place, chastised Pope St. John Paul II for his his orthodox stances on birth control and ordination of women.

BUT THIS IS THE KICKER OF WHICH I HAD HAPPILY FORGOTTEN, BUT THERE WAS MUCH WEEPING AND GNASHING OF TEETH OVER THIS BY MANY 1970'S TYPE PROGRESSIVES: THE GOOD LOVING BISHOP OF NEW ULM "CRITICIZED JOHN PAUL II'S DECISION TO PUBLISH A UNIVERSAL CATECHISM, SEEING IT AS UNNECESSARY AND OVERLY CENTRALIZING!"

That in a nutshell is why I hate the 1970's and have such a visceral reaction to it when it returns in 2016! The heterodox didn't want the orthodox Catholic Faith taught to children or adults and the Catechism of the Catholic Church which Pope St. John Paul published with the help of then Cardinal Ratzinger PRECISELY  to get the Church's catechetical ministry back on track and away from coloring book catechists and bishops, no matter how loving they were and how much they loved their place--atheists can do that for God's sake!

The article below mixes apples and oranges. Criticism directed at a priest or bishop even if he be the pope is valid when the criticism has something to do with orthodoxy. It is invalid to criticize a church official who is orthodox and to praise someone who is heterodox no matter how much LOVE is in play!

THE ONLY SOLACE OR COMFORT WE CAN TAKE, UNLIKE THE LATE BISHOP WHICH JOHN ALLEN DESCRIBES, IS THAT POPE FRANCIS HAS REPEATEDLY STATED HE UPHOLDS WHAT IS TAUGHT IN POPE ST. JOHN PAUL II'S CATECHISM OF THE CATHOLIC CHURCH. AND IN COMPARISON TO THE LONG DEAD, GOD REST HIS SOUL, BISHOP LUCKER, THAT'S SAYING A LOT!

Let’s drop the obsession with criticism of Pope Francis

On Monday night I was in the diocese of New Ulm, Minnesota, to give the annual Bishop Raymond Lucker lecture. Lucker served as the bishop there for a quarter-century, from 1976 to 2000, and is remembered in New Ulm primarily as a caring pastor who loved his people and his place.

Nationally, however, Lucker is also remembered as a progressive who sometimes broke ranks with Pope John Paul II during the 1980s and 1990s, including over birth control and the ordination of women. He also criticized John Paul II’s decision to publish a universal catechism, seeing it as unnecessary and overly centralizing.

That legacy comes to mind in light of one of the most persistent narratives about Pope Francis, which is likely to get a new lease on life this week as we approach the third anniversary of his election on Sunday.

In a word, that narrative is “blowback.”

Because Francis is popularly seen as a progressive-minded maverick, there’s a deeply ingrained belief that he must be making conservative bishops angry, both in the Vatican and around the world, and that some of those perceived enemies must be maneuvering to undercut him.

That narrative was reinforced this week with news that an official Catholic newspaper linked to Cardinal Norberto Rivera Carrera of Mexico City has taken the pope to the woodshed, suggesting in an editorial last Sunday that the pontiff’s criticism of Mexican bishops during his recent trip to the country for sometimes acting like “princes” was unwarranted, and that the pope was the victim of “bad advice.”

To this day, one of the two or three most popular questions I get, both on the lecture circuit and in media interviews about the pope, concerns which bishops are for him and which are against him. Now, Rivera Carrera definitely has made the cut as someone who’ll be seen as part of the latter camp.

Before getting carried away in speculation about internal power struggles, however, there are three points that ought to be made.

There is absolutely nothing new about the idea that not every bishop sings “Alleluia!” at whatever the pope says or does.

In truth, there was tremendous internal resistance over almost three decades to St. John Paul II, as the Lucker story illustrates. For much of the 1980s and 1990s, it was widely understood that an axis of moderate-to-progressive prelates in important places, including Cardinals Joseph Bernardin in the United States, Basil Hume in the United Kingdom, and Carlo Maria Martini in Italy, constituted more or less a “loyal opposition” to important parts of John Paul’s agenda.

If anything, the internal blowback to Pope Benedict XVI was actually far more vicious than anything Francis has faced. At one stage, two respected Italian journalists published a book called “Attack on Ratzinger” documenting the ways that various forces in the Church, including some Vatican officials and bishops around the world, had not only criticized Benedict, but actively subverted his agenda.

Reaching further back in time, it’s well-known that many conservative bishops in the early 1960s weren’t exactly thrilled with Pope John XXIII’s decision to call an ecumenical council. Later on, scores of bishops either quietly or noisily complained about much of Pope Paul VI’s agenda — liberals especially with his reaffirmation of the ban on birth control, and conservatives with his liturgical reforms.

Indeed, the “pope v. bishops” narrative goes all the way back to the beginning, with clashes described in the New Testament between Peter and Paul.

The truth of the matter is that today there are more than 5,000 Catholic bishops in the world, and the idea that all those alpha males are going to be in lockstep all the time is simply a fantasy. The difference between Catholicism and the Borg is that resistance may not be futile, but it is absolutely inevitable.

Yet there’s no real indication that the blowback experienced by Francis is any greater than that of his immediate predecessors, or that it’s had much impact in terms of getting in his way. The only novelty today is that in a media-saturated world, grumbling that once would have remained confined to insider circles now becomes an instant global cause célèbre.

2. What goes around, comes around.

There’s often a degree of hypocrisy in how people react to bishops who criticize a given decision or statement by Pope Francis.

For decades, media outlets and liberal Catholic reformers would lionize prelates who publicly defied John Paul II or Benedict XVI, styling them as prophets and true pastors. Today, many of those same people will paint bishops who strike dissenting notes under Francis as disloyal and saboteurs.

An equal-and-opposite conservative form of hypocrisy can be found among those who not long ago screamed for bishops who questioned the pope or the Vatican to be drawn and quartered, but who now line up around the block to get books signed or to snap selfies with prelates who challenge Francis.

In other words, whether “blowback” is perceived as an act of courage, or of scandal, often depends less on the fact of it and more on the content.

Third, the mere fact of registering a contrary opinion does not in itself constitute “resistance.”

In fact, Francis has called openly for robust debate on issues in the Church. During his two synods, he demanded that bishops “speak boldly and listen humbly.” When a bishop does speak out on an issue, therefore, he may well understand himself not to be defying the pope, but serving him.

So far, I’ve cast this discussion in terms of basic political science. There’s also the spiritual point that whatever else you think of them, most bishops are true believers who make a good-faith effort to practice the “religious submission of intellect and will” with regard to the pope of which canon law speaks.

Of course, some bishops will do so with greater enthusiasm than others, but that’s mostly human nature rather than dissent.

Perhaps as an anniversary present to Francis, we can get past the titillation over seeing bishops criticize the pope, which has been a feature of Catholic life since time immemorial, and drill down to the real question: In any given case, what exactly is the objection being expressed, and is there any merit to it?

That, I suspect, is a conversation Pope Francis himself would be the first to welcome.

The Church in the US basically gave up teaching the truths of the Faith following the Council. It was all love, love, love. Well, news flash! Atheists love, Jews love, Protestants love, so if that's all you've got to sell, give up. Although loving God and loving your neighbor are fundamental, it is the fact that the Church is a sacramental system, grounded in love, which distinguishes the Faith from just another nice social organization. The sacraments fulfill Christ's promises to us that He will never truly leave us. They are the aids He has left us. We really need to get back to teaching the efficacy of the 7 sacraments.

John A. says that John Paul's agenda was being obstructed..... John should say that the gospel of Christ taught by John Paul (even insisted on) was fought by the faithless, those who were coopted by popular culture, embraced existential philosophy of one kind or another, who disdained St Thomas Aquinas, for example, Jesuits priest, theologians who have turned against their founder St. Ignatius, and cast aside the memory of their scores of martyred brothers preaching all over the globe....that is what John should be saying! John has been part of the problem. He is considered a good journalist by many. It would merit him more to be known as a friend of John Paul or better yet an unabashed acolyte of Benedict XVI. But no one ever accused him of either "sin".

Perhaps Fr Longenecker should read this post and try to regain his equilibrium ...

Allen, not for the first time, gets it wrong. 'Religious submission of intellect and will' is what is demanded of the faithful with regard to the ordinary and non-infallible Magisterium (as opposed to the Ordinary and Universal Magisterium, which is held to be infallible and requires our assent). It does not describe the relations of the bishops to the Roman Pontiff. For this, see Lumen Gentium, which despite its Vatican II provenance, defines what the Church has always believed.

Thanks for sharing these blogs with us, really all blogs are very nice…. I am really inspired from your blog hoping you will be there with more interesting post like this. I like your blog take on Beauty products topic is well-written and original. Thanking you for this.
For More Please Acid Reflux