POPE FRANCIS, OF COURSE, HAS ALREADY REITERATED WHAT POPE ST. JOHN PAUL II DECLARED THAT THE CHURCH AS NO AUTHORITY TO ORDAINED WOMEN INTO HOLY ORDERS; BUT DID YOU KNOW THAT IN 2014 POPE FRANCIS ALSO FORBADE WOMEN FROM PREACHING THE HOMILY DURING MASS? YES HE DID!


If this is allowed first: 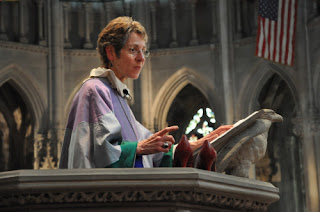 Will this be allowed next???? 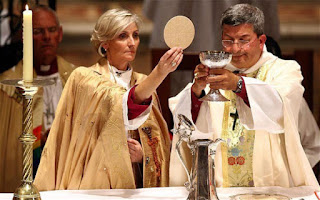 NO TO WOMEN PREACHING THE HOMILY AT MASS!

Sandro Magister at his blog, Chiesa:

No To Woman As Priest. But At Least Let Her Give the Homily

ROME, March 7, 2016 – Not the Mass. On the sacred ordination of women Francis cut off the discussion right away, shortly after he was elected pope. “The door is closed in definitive form,” he said in his first in-flight press conference.

“L'Osservatore Romano” is calling for this in its women’s supplement. But Francis would have to contradict himself, in addition to the age-old tradition of the Church. Because he as well, two years ago, prohibited women from preaching during the Mass

Few know, however, that even Pope Francis has intervened to reiterate the ban, in line of principle...

Paragraphs 4 and 5 of the “Homiletic Directory” promulgated in 2014 in the form of a decree by the congregation for divine worship, with the approval of the pope, in fact state:

“Given its liturgical nature, the homily also possesses a sacramental significance: Christ is present in the assembly gathered to listen to his word and in the preaching of his minister, through whom the same Lord who spoke long ago in the synagogue at Nazareth now instructs his people. […] It is because the homily is an integral part of the Church’s worship that it is to be delivered only by bishops, priests, or deacons, […] or, in any case, always by one ordained to preside or assist at the altar.”
Posted by Fr. Allan J. McDonald at Tuesday, March 08, 2016

I guess he's not the "fluffiest Pope evah."

Why don't those who believe in ordination of women join an ecclesial community that shares their belief?

Dialogue, because they're troublemakers and attention seekers.

Did our Holy Father tell you this or is it spreading gossip and rumors?

Here is the most powerful way in which women could "preach" at Mass: Via the revival of head coverings and modest clothing. That would be the most important and powerful message that Catholic women could preach during Mass.

As a Catholic man, whenever I see a woman dressed as above, at Mass in particular, she has instructed me in most powerful fashion as to how God wishes for me to view and treat women. Beyond that, Catholic women dressed in said fashion instruct me as to how to conduct myself in all ways. I am reminded to respect authority, dress and conduct myself modestly, and most of all, to have great love and respect for God.

Women have the holy power to help lift the Church from Her crisis of faith. If women resumed their proper God-given roles at Mass, (as taught by the Traditional Latin Mass) that, in turn, would inspire women (and, for that matter, men) to better understand their proper God-given roles in world. That, in turn, would leaven society in holy fashion. Instead, the liturgical revolution has turned upside-down, within and without the Church, the proper roles that God has assigned to women and men.

I have already seen how my local parishes are working up to this. First it is women giving something that sounds like a homily, but somehow technically is not, at the communion services. Communion services are for when a priest is not available. The second is when one of the parish women gives an introduction before the mass. She introduces the readers, servers, and the priest. That is followed by a synopsis of the gospel message. Similar to a homily, but different.