THE MISSING LINK IN POPE BENEDICT'S INTERVIEW RECOVERED, LIKE THE THIRD SECRET 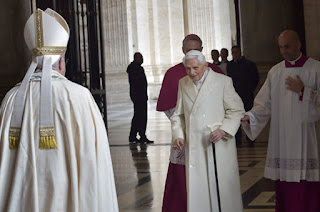 Catholic World Report has learned that the recently published interview with Benedict XVI—which actually dates back to October 2015—was missing a significant section in most English interviews, including the one posted on the CWR site three days ago (via Catholic News Agency and Inside the Vatican).

Finally, let’s recall, above all Henri de Lubac, and with him, several other theologians who have emphasized the idea of vicarious substitution. For them, the pro-existence of Christ is the expression of the fundamental figure of Christian existence and of the Church as such. It is true that the problem is not fully resolved, but it seems to me that this, in fact, is the key insight that thus impacts the existence of the individual Christian. Christ, as the unique One, was and is for all and Christians, who in Paul’s awesome imagery make up Christ’s body in this world and thus participate in this “being-for.” Christians, so to speak, are not so for themselves, but are, with Christ, for others. This does not mean having some sort of special ticket for entering into eternal happiness, but rather the vocation to build the whole. What the human person needs in order to be saved is a profound openness with regards to God, a profound expectation and acceptance of Him, and this correspondingly means that we, together with the Lord whom we have encountered, go towards others and seek to make visible to them the advent of God in Christ.

It’s possible to explain this “being-for” in a more abstract way. It’s important for humanity that there is truth in it, that this be believed and practiced. That one suffers for it. That one loves. These realities penetrate with their light into the whole world as such and sustain it. I think that in the present situation it is become always more clear and comprehensible for us that which the Lord said to Abraham, that is, that ten righteous men would have been enough to save a city, but that the city destroys itself if such a small number is not reached. It is clear that we need to reflect on the question in its entirety.

The restoration of the middle section in bold lends significant weight to the interpretation that Benedict is favoring de Lubac’s theory of “vicarious substitution” to explain the possibility of salvation outside of the faith. Lacking these lines, the weight to switches to a more ambiguous position.
Posted by Fr. Allan J. McDonald at Monday, March 21, 2016

I love that Benedict is clearer than most theologians, but wouldn't it have been far easier to just point out that Christ called us to be salt, light, and leaven?Salt and Leaven are fractions of the ingredients that make up a loaf of bread....and yet they make all the difference to the taste and texture of the finished loaf.

Light is a simple thing and yet essential for all life on earth.

But while Christians are to be leaven in society, we are called to make disciples of these societies. The society is kept alive because of the Christian spirit living within it, but people are still called to fellowship. The pagan American not in the Church enjoys a hundred benefits from society retaining Christian foundations....but he is still not saved if he does not discover Christ through the benefit of a Christian culture.

The underlying, unspoken "problem" with ALL of these theological speculations about who is saved and how, is that our FEELINGS would be hurt if we conclude that people are damned who live their whole lives and die outside of the Church. Our FEELINGS would be hurt and we might just have some personal guilt for our lack of zeal....and we can't have that! much better to come up with truly convoluted theories that make the Lord's words in the Gospel even more opaque than trouble hearts and make people FEEL BAD about their pagan uncle or apostate aunt.

It's the modern turn to subjectivity in morals (and tyranny in politics) that leads these theologians to search for a subjective solution to an objective issue. That a "good Muslim" might go to hell despite being a "nice guy" is appalling why? Because suddenly we have a responsibility to be salt, light, and leaven TO HIM rather than to toss up our hands and say "the Holy Spirit will do it".

Maybe. Maybe the Spirit will do "it" (reveal the truth of God and God's will for mankind) to this random non-believer. Maybe the poor man who otherwise could have met a Christian but didn't because Christians all kept the Good News to themselves, won't listen to the inner promptings of the Spirit and will go to his death in his sins....

We won't know until it's too late for any of us.

So why take the risk when Our Lord's words clearly call for us to work our best to let the light shine? Why do we put on bushel baskets and then think the lost and orphans of the world will find the light by some other way?