THE CYCLICAL NATURE OF THE CHURCH AND WORLD TODAY: WHERE'S IT ALL LEADING? 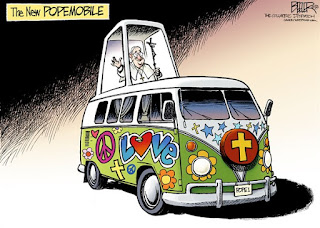 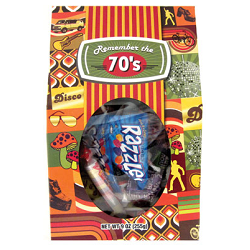 I think there is a worldwide nostalgia for the 1960's and 70's and it seems that this culture driven fad for it  is also driving some of what is going on in the Church as a unique perfect storm of sorts, similar to the world and Church of the 1960's and '70's, hits us once again but this time on steroids due to the new communication sources and technologies we have.

In the 60's and 70's progressiveness under the guise of young radicals or revolutionaries began a counter-cultural, drug induced, drop in and drop out, anti-authority campaign in politics. The Vietnam War, a most unpopular one, the corruption in politics leading to the resignation of Spiro Agnew, President Nixon's Vice President and then ultimately to President Nixon's resignation with the potential of him being charged with crimes and sent to prison if not for his new Vice President, Gerald Ford, who then became president giving him a blanket pardon.

As desegregation ramped up, racial tensions exploded. Along with anti-Vietnam protests, racial equality ignited passions on both sides.  Police were called pigs and there were major riots throughout the USA causing death and destruction in our cities. The term "long hot summer" referred to these rampages and revolutions.

Today, we've seen  similar racial tensions in our cities with riots. We see where law enforcement is demonized. We are seeing the melt down of our political process being turned into a carnival of crass entertainment with candidates acting as though they are school yard children hurling taunts, insults and bullying at each other, all for America to watch, sneer, laugh, enjoy, mock and lament. No one seems to call it what it is, a disgrace.

And as all this happens in culture, the Catholic Church is being pulled apart by the same liberal/conservative, progressive/traditional forces similar to what occurred in the 1960's and 70's. It manifests itself in liturgies that are sacrilegious, creative beyond what is permitted, and reactionaries calling for a return to the 1950's. (I'd be happy with the time of Pope Benedict's reign, myself.)

After a time of restoring stability, discipline and beauty in the Church under Pope St. John Paul II and Pope Benedict XVI, we have returned to the chaos of the days that Pope Paul VI himself lamented (and which he caused) towards the end of his papacy. The smoke of Satan had entered the Church.

Pope Francis has become the most divisive pope in modern history. His ambiguity as plunged once again the Church into 1960's and 70's rivalries and ideologies about the nature of the Church, the clericalization of the laity, the laicization of the clergy and a liturgy that is stripped of "majesty" meaning a majesty that points to the Kingship of Christ, crucified and risen and now reigning in glory in heaven.

There are now questions not only about discipline which legitimately can change, but also of changing doctrines which can't change. And it is the pope who seems to be leading the way depending on what he says from day to day in his much too frequent off-the-cuff interviews and statements.

Depending on the clique you read on the blogs, there is great excitement and anticipation of remaking the Church into an Anglican Communion of sorts with its devolving ideologies and fragmentation to the great anxiety and depression that many feel that in fact the pope is making the Church in the image of the Anglican Communion with its factions. What is odd is that it is well documented what has happened to liberal Protestantism in general and liberal Anglicanism in particular. It is a recipe for death.

Why do liberals have a death wish for the Church? We can only explain that it is the work of Satan.

The only good news is and it is actually great news, the devil has already been defeated in eternity by Jesus Christ's passion, death and resurrection but not quite yet in time as the Church goes through the birthing process that will culminate in the Second Coming of Christ and the Last Judgment of the living and the dead and the resurrection of the body to its everlasting existence, joined to its soul in heaven or hell according to what they did in the body.

In the meantime a new pope will arrive on the seen and the pendulum will swing back in the other direction and tranquility, at least on the surface, will be restored.  This clairvoyant knows.

There won't be any calm in the Church when Francis dies, is murdered or retires.

Look at the bunch who elected him and look at who he appointed as cardinals. We are not exactly talking about the brightest and the best.

Those in high places are openly talking already about Tagle being the next pope. Tagle! Basically another radical who hates Catholicism. While a man who is arguably the most intelligent mind in the college of cardinals, Cardinal Burke, is reduced to nothing and publicly ridiculed while unworthy and blatantly not very intelligent or spiritual men are raised high. We will not experience calm but the deluge.

We are on the verge of witnessing a pope, the Vicar of Christ on earth, praising a schism in the Church by joining a bunch of heretics and openly immoral people in praising God for Martin Luther. Things aren't going to get better that's a fantasy.

"Comments that are derogatory of the Faith or insulting to others will not be published, especially name calling or disrespect shown to clergy or laity."

This is a lie.

"Look at the bunch who elected him and look at who he appointed as cardinals. We are not exactly talking about the brightest and the best."

And that is a MINOR example of the insulting, derogatory comments you say you will not publish.

Rather than self-righteous indignation over my rules, why don't you deal with what that comment expressed (which by the way many feel today, right or wrong) and deal with it point by point in a cogent way? Wouldn't that serve things better than my censorship which could be called repression to hide what actually exists in the Church today?

I'm not indignant about your "rules," not in the least. It's your blog, you can have all the rules you want.

By publishing such comments you actually encourage those who are "Internet Trolls are Narcissists, Psychopaths and Sadists." As you have decried the publicity given to mass murderers, claiming it encourages their destructive behavior, you should consider the same consequences when you post comments, giving publicity to those whose comments are, in many cases, nothing more than angry rants.

There's no dealing with such comments in a "cogent way." What is one supposed to say to them? "The cardinals aren't dumb" and "Cardinal Tagale doesn't hate Catholicism"? You know this is not a legitimate option.

Why do conservatives have a death wish for the Church? We can only explain that it is the work of Satan.

Tis the liberals with a death wish for the Church.

How prissy. If you have a problem with the comments, use your intelligence and communication skills to respond to the comment, but please don't moan. It's embarrassing to other readers.

"Why do conservatives have a death wish for the Church? We can only explain that it is the work of Satan."

From a historical and sociological standpoint, the so-called "conservatives" are the only Catholics left. The Catholicism to which the so-called "Catholic liberal," pledges allegiance is not the historically and socially discernible community of the Catholic Church. I would commit perjury if I called the "liberal" version of the Catholic Church anything other than the a-historical, individualized fantasy that it is. For this reason, the "conservatives" ensure the continuation of the real and discernible Catholic Church, while the liberals ensure its end and replacement with a new creation of their fantasy.

Anonymous - There is no response to, "We are not exactly talking about the brightest and the best" said in reference to the College of Cardinals.

And there is no response to, "Tagle! Basically another radical who hates Catholicism."

These are simply baseless, defamatory, and scandalous rants that, according to Fr. Mac's own rules, should not be posted here.

The real embarrassment is that a so-called Catholic makes such comments in the first place.

These are simply baseless, defamatory, and scandalous

I'll refrain from using the words I would to describe the College of Cardinals. They might cause you to have a heart attack.


Unlike your own opinions, which seem to give you an orgasmic delight.

Really? Orgasmic? You have led a sheltered life....