RULES ARE NECESSARY TO PREVENT ABUSE, LITURGICAL AND OTHERWISE! I WOULD SAY THAT THIS TYPE OF LITURGICAL ABUSE SHOULD BE UNDER THE CATEGORY OF "ONE STRIKE AND YOU ARE OUT!" 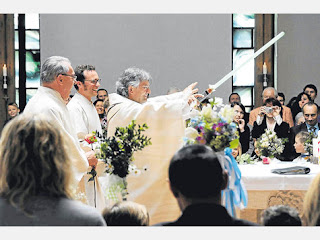 I do not think these things are unrelated. The liturgy, especially the Mass, has become a disaster in the last 50 years. No matter how poorly the Mass may have been celebrated prior to the Council in this, that or another place, it pales in significance to what has happened to the reformed Mass which in some places is sadly a joke.

RULES ARE NECESSARY TO KEEP THE MASS AND OTHER LITURGIES OF THE CHURCH DIGNIFIED, SACRED AND CELEBRATED WITH REVERENCE.

Apart from washing the feet of women on Holy Thursday, Pope Francis' manner of celebrating the liturgies of the Church is in continuity with Pope Benedict precisely because he has maintained Msgr. Guido Marini as the papal Master of Ceremonies, a stroke of genius for this pope. And then His Holiness bombshell of appointing Cardinal Robert Sarah as the Prefect for the Congregation of Divine Worship solidified that continuity with Pope Ratzinger especially as it was generally thought that the other Msgr. Marini (Piero) would get it, the anti- Ratzinger. More on this after a couple of other connections.

Yesterday, His Holiness, who has said a few times that he has a disdain for small minded rules, established quite of bit of them, rules for saint making, since small minded isn't an apt description for law to keep things on track, be it liturgical or financial. He has placed "small minded" safeguards on how money is spent to prevent embezzlement and/or using the money for what is not intended. Financial abuse in the Vatican and elsewhere in the Church is the second major scandal of this new millennium, the sex abuse scandal being the first.

RULES ARE NECESSARY TO KEEP GUARD ON THE FINANCES OF THE CHURCH AND THE PROPER APPROPRIATION OF DONATED FUNDS!

Of course with the release of the movie "Spotlight" there has been a resurgence of reporting on the sex abuse of minors scandal in the Church.  While sex abuse certainly occurred prior to the Council when rules for proper behavior were in force and when those in the seminary who did anything wrong were ushered out of the seminary under the cover of night, there were still some problems with some priests and many bishops simply moved these problem priests from parish to parish.

After Vatican II, with the collapse of the respect for the small minded rules of Church Law and there was a complete collapse, not only was/is the liturgy abused in the most heinous way (think southern California) but especially in the 1970's, precisely 1974, the sexual abuse of minors, especially teenage boys peaked as never before. Bishops who cared less for small minded Church Law were imbued with a new post-Vatican II theology of mercy and that the triumphalism of the Church as a part of its eschatology could usher in the kingdom through forgiveness and rehabilitation!

Thus mercy was shown time and time again to perverted priests or priests who simply wanted to live a licentious sexual lifestyle without constraints. But no mercy was shown to those abused or their families who raised the alarm!

RULES ARE NECESSARY TO KEEP MERCY FROM BECOMING THE ENABLING OF PERVERTED, SINFUL BEHAVIOR.

Now back to the Liturgy. Recently the British newspaper Catholic Herald has a piece on “the unstoppable rise of Cardinal Sarah” who is seen in traditionalist circles as someone who would make an excellent future pope in the image of Pope Benedict XVI.

One progressive liturgical blog is rather snarky about the good Cardinal, perhaps a hold over resentment that their fluffy pope didn't name Msgr. Piero Marini to be Prefect for Divine Worship.

Despite the silly snarkiness of the writer of this progressive blog, one person, Father Alan Griffiths commenting on Cardinal Sarah had some astute sound things to write:

...The observation I would like to make rests on my (13 years) experience as a Seminary teacher in Liturgical Studies both theoretical and practical.

Broadly speaking, I found that seminarists are now more ‘trad’ than they were thirty years ago or when I was one myself from 1968 to 1975.

I wonder whether this has something to do with the context of our experience through those times.

Living through the liturgical revisions after Vatican II, one might have received from them the impression that Liturgy is something you can change and revise creatively and meaningfully, etc.

But, once that initial generation has passed, perhaps we have begun to return to an older notion of Liturgy as something we don’t ‘create’ but which we ‘receive.’

My experience of those in priestly formation was that for good or ill, they were more respectful of the ‘given’ texts and rites than was my generation.

The consequence of this is (I hope) that we priests might spend more time on preparing for celebrations of Mass, etc, than we do on ‘planning’ their constituent elements.

My final comments: If what Father Alan Griffiths says is correct and I believe it to be so, then the future of the liturgy which will hinge not only on future priests but future bishops from this crop of priests will continue to improve as Pope Benedict XVI desired and as it appears from His Holiness, Pope Francis' two major appointments (one actually a renewal) in the Liturgy desire as well, to include the current reigning pope.

After all, this is what Pope Francis stated directly to Cardinal Robert Sarah upon his stunning appointment:

“I want you to continue to implement the liturgical reform of the Second Vatican Council … [and] to continue the good work in the liturgy begun by Pope Benedict XVI.”

Contrast what Pope Francis accomplished with His appointments of the good Marini and Cardinal Sarah with what could have been with the bad Marini:

Archbishop Piero Marini, [is] a known opponent of Benedict’s strategy for the liturgy. Archbishop Marini, a fluent Spanish speaker, is known to be close to Pope Francis. Why, then, was he thwarted of his rumoured ambition to take the reins of the Church’s liturgical life, in favour of a cardinal who has given voice to the very Ratzingerian (and un-Marinian) conviction that “one cannot encounter God … without trembling, without awe, without profound respect and holy fear”?

I found it amusing that the editor of that progressive couldn't bring himself to consider the possibility that maybe Francis sees Sarah's/Benedict's position on liturgy as valuable even though he doesn't share it 100%. After all, Francis didn't get rid of all of the changes in the papal liturgy that Benedict made (e.g. the crucifix in front of the celebrant). Also, the few times that Francis has waded into the liturgy wars he has criticized a lack of a sense of adoration as primary in contemporary liturgies, and this is one of the main things that Sarah criticizes. Again, it's interesting that this progressive blog has conveniently missed those comments of Francis and never acknowledges their existence.

Anonymous said..."Also, the few times that Francis has waded into the liturgy wars he has criticized a lack of a sense of adoration as primary in contemporary liturgies..."

His Holiness Pope Francis has also waded into the liturgical to promote the never-ending liturgical revolution. But then, for decades, our Popes have done that. They promote Tradition and novelties.

In regard to Pope Francis' recent excursions into the liturgical war...

MEXICO CITY, Feb. 16 (UPI) -- "Pope Francis presented a decree to Mexico's indigenous peoples officially allowing the use of three native languages in the country to be used during mass."

Interesting that Cardinal Sarah's upbringing was influenced By the Holy Ghost Fathers. My great-uncle (d.1965) was a priest of the CSSp and his Superior General from 1962 was Marcel Lefebvre. Lefebvre could claim with considerable authority that the post-V2 liturgical changes were not wanted in the mission territories; he resigned in 1968 because he felt he could not prevail against the Modernist trends which were sweeping through all the religious Orders, his own included.

Sarah took over a dicastery which had only recently been purged of the Ratzingerians and whose new undersecretary was a disciple of Piero Marini; I wouldn't expect too much from the CDWDS. A similar purge took place in the office for papal ceremonies, leaving Guido Marini somewhat out on a limb.

Sarah might be an African since he is a native of that continent; culturally he is as much a Frenchman as is the Archbishop of Paris. To be French is primarily a cultural construct, whereas to be English is primarily a racial one.