THE EF MASS IN ALBANY TODAY! ROCHESTER TOMORROW? AND SOME OTHER TIDBITS OF INTEREST LITURGICALLY

What was gained in this renovation of Albany, New York's Cathedral of the Immaculate Conception? Did it make the clergy and laity of this diocese better Catholics and better disciples in mission? 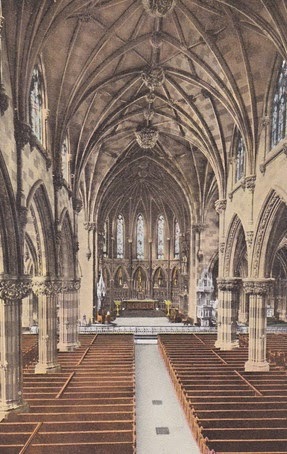 After (not bad, not great, could have been worse!): 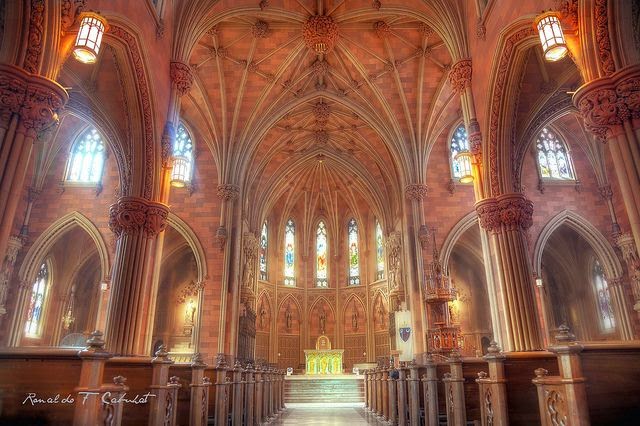 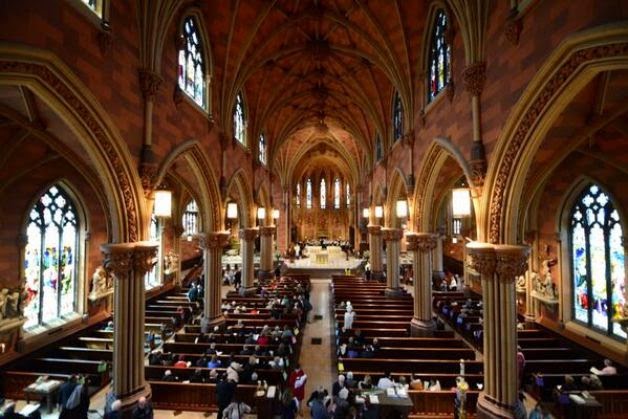 Rochester and Albany, New York had two of the most progressive bishops in the country and for a long, long time, for decades and decades! It would have been unimaginable that either of these two progressive bishops would celebrate the Extraordinary Form of the Mass in their cathedrals.

But times move on and the Catholic Church modernizes by becoming progressive in new and daring ways when fresh blood is named as new bishops and by Pope Francis no less! I suspect the new Bishop of Rochester will do likewise if he hasn't already!

Thus, as Fr. Z reports, the new Bishop of Albany, Bishop Edward Scharfenberger, celebrated the EF Mass at his cathedral. Looking at this picture, though, one can see that someone (could it have been Rambusch?) updated the sanctuary of this cathedral by pushing the altar into the transept and very high up at that, to make the altar closer to the people and so people could be seated around it on three sides. I wonder how this made Catholics better Christians?

The problem with this set-up is that it presumes the Cathedral is only used for Sunday Mass. It makes weddings and ordinations a bit more difficult to celebrate since everyone and everything has to be on the same level as the altar or everyone else and everything else in on the level of the nave where the pews are and thus no one can see anything except those in the first and second row of pews.

But it does show you that an EF Mass can be celebrated in a sort of wreckovated cathedral in Albany, NY or a newer modern one in the round! 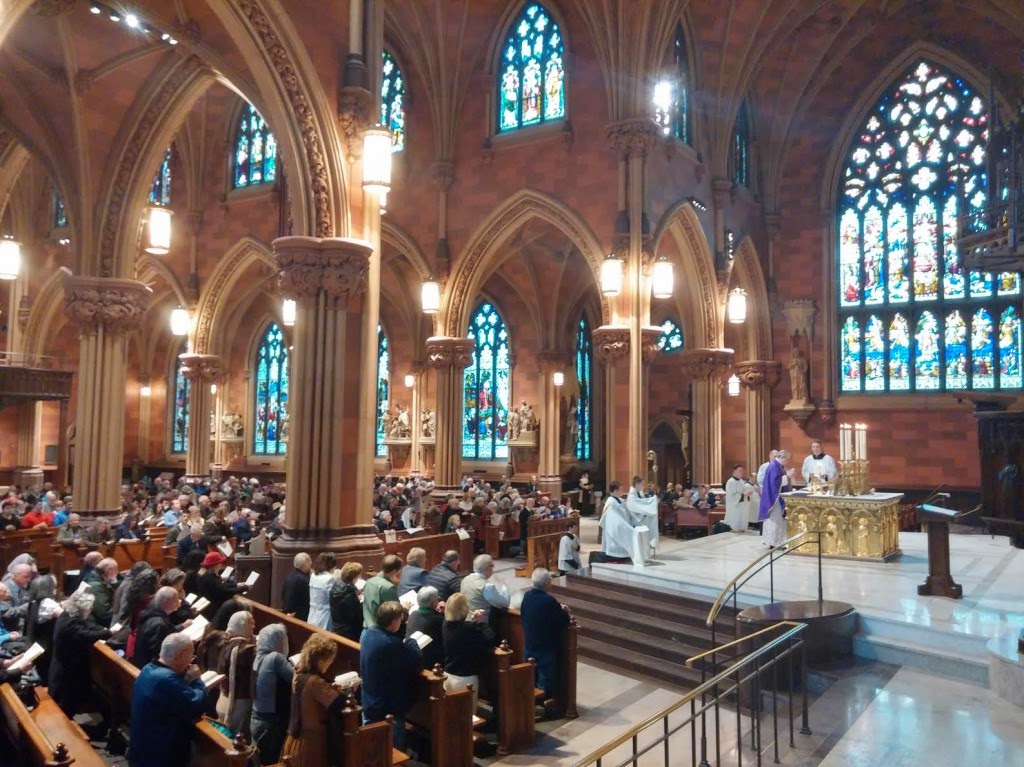 Of course the Cathedral of Saint John the Baptist in Savannah has had the EF Mass every Sunday at 1:00 PM for years. In the two photos below, the diocesan Vicar General, Fr. Dan Firmin celebrates this Mass. When I became pastor of the Church of the Most Holy Trinity in downtown Augusta in 1991, Dan Firmin was about 12 years old and served as an altar boy there! Most Holy Trinity has the best trained altar servers in the world! In 2004 when I was named pastor of St. Joseph Church in downtown Macon, he and another newly ordained priest were named my parochial vicars. How weird is that! But evern more weirder is that Fr. Dan Firmin is the Vicar General for the diocese for the past three years! Be careful how you treat your altar boys and train them right, because they can grow up to do this at your cathedral: 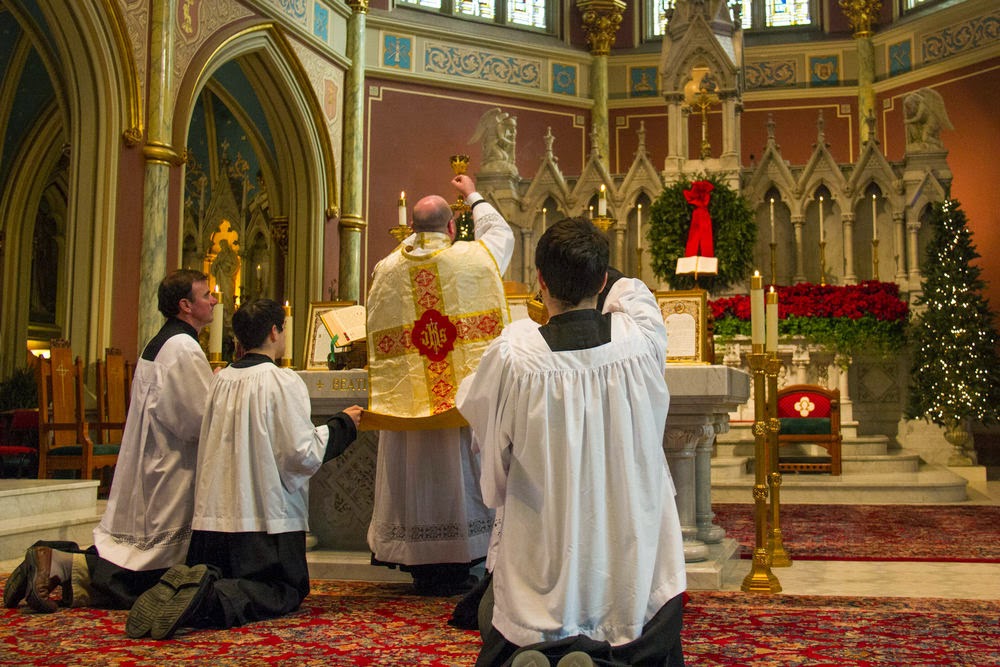 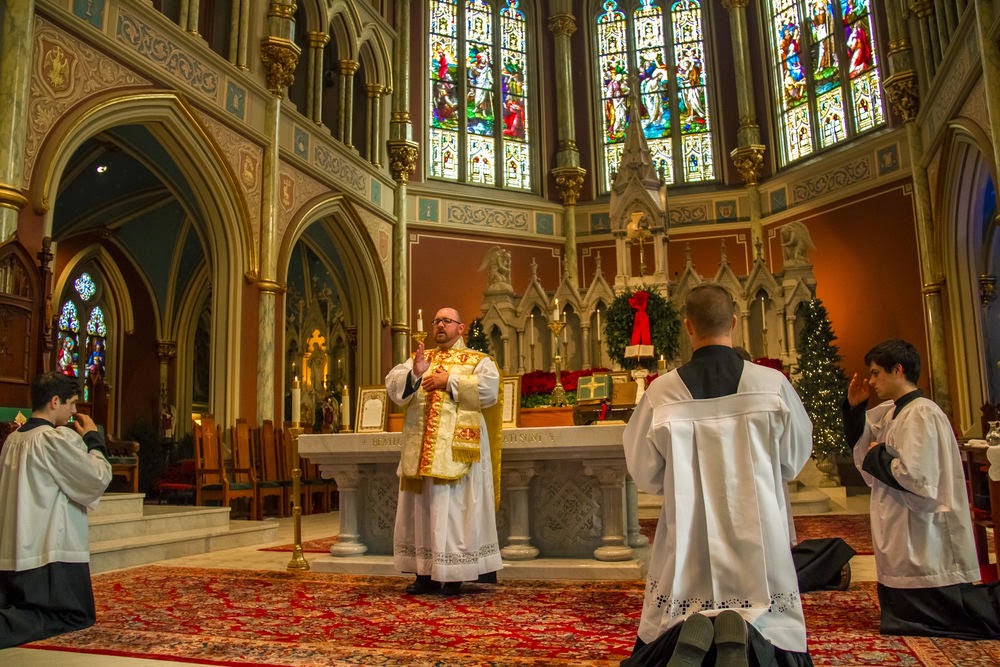 The diocesan Vicar General's former pastor (from two different parishes at that) celebrating the EF Mass at his Cathedral in Macon! So there! 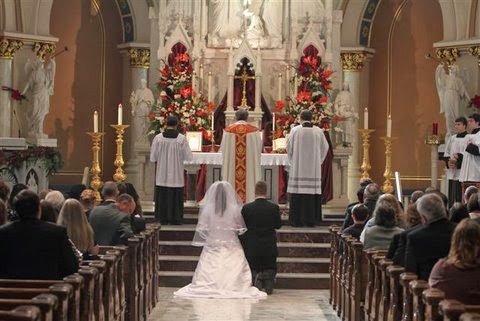 If you could add up the millions upon millions of dollars unnecessarily spent on all of this destruction and considered its number today in terms of inflation, it would be staggering.

It is not just that amount though but the scandal of destruction of Holy things and spaces bought and paid for by the pennies of Irish, Italian, German, Polish and other immigrants whose children when without extras so the extra could go to the Church.

Then, these iconoclastic fascists come along and throw it all away.

What good came out of it? What good could that money have done instead of this?

Some day, those that did this will know (if they don't already) what the LORD in whose honour this beauty was dedicated, thought of the abuse of the little people and their pennies.

And not a bit of it decreed by the Second Vatican Council!

Gosh, Fr. McDonald, for a second there I was getting really excited that there would now be another EF Mass in Albany, GEORGIA! Still, even if that were true, that would be a long drive for me--just like Savannah or Macon.

I'm still waiting for more Fr. Dan Firmins (the younger priests of his generation) to come forward and add more celebrations of the EF Mass at more locations throughout the Diocese of Savannah. I live about 20 miles west of Waycross just off the Tifton highway (about 40 miles from Tifton). Though he doesn't yet know it, I have seriously considered approaching one of your former parochial vicars to ask him if he would consider celebrating the EF Mass on some kind of regular basis in this part of the Diocese.

Summorum Pontificum only becomes meaningful if there are knowledgeable and willing priests to celebrate the EF. Supporting the recruitment and education of seminarians is the central point in my parish presentation on the Bishop's Annual Appeal this weekend: No priest---No Mass!

Albany suffered for decades from Bishop Hubbard and the feminization in the diocese, women running everything and running around the altars while the "presiders" as the Novus Ordonarians call them we call them priests would just sit on the side in a chair and do nothing while lay people touched the sacred vessels with their unclean hands. I think a new wind is instore for the diocese of Albany and Rochester may the Holy Ghost return the TLM to all the altars of the world and pray for the new bishop of Albany.

"...while lay people touched the sacred vessels with their unclean hands."

As if you knew where the priest's hands had been....

That is a digusting comment about a priest's hands in regards to my comment about lay peoples unclean hands, shame on you. That is the problem with Novus Ordonarians unlike you we believe a priests hands are sanctified. Comments like yours only reinforce our belief that the TLM is the True Mass of All Times, again shame on you for that nasty comment.

One day the Promised Land of the Reform of the Reform,
For those of the Faith, far and wide will be the norm.

So, "sanctified hands" can't be unclean? And you wonder why people run away from true believers in the "True Mass of All Times"?

Anonymous 5.12 pm - even in the Ordinary Form of the Mass the priest washes his hands at the lavabo, so yes sanctified/consecrated hands are normally clear which can't be said of the unconsecrated unwashed hands of lay people. It may happen in some parishes but I have never seen lay people who disribute communion wash their hands.

Apart from that, for centuries only the priest's consecrated hands could touch the host. Unfortunately, comments such as yours only confirm in my mind that many lay people who attend the Ordinary Form of the Mass no longer see or want any distinction between priest and lay people and I have heard many say they would like to see an end to the ordained priesthood. Perhaps that is what lies beneath your comment, if you were to be honest?

Jan - Of course there's a distinction between priests and laity. But that distinction doesn't mean that 1) the hands of laity are unworthy to touch the host or chalice, or 2) that the hands of lay people are automatically "unclean."

Also, I see the hands of the Extraordinary Ministers - they are not unclean.

The great majority of priests I have seen celebrate mass do not, in fact, wash their hands at the lavabo. There is a minimal pouring of water, often times touching only the tips of the fingers which are then dried by brushing the fingers across the towel.