AUGUSTA'S CHURCH OF THE MOST HOLY TRINITY UNDER THE PATRONAGE OF SAINT PATRICK! (AND SAINT VINCENT DE PAUL)

The Church of the Most Holy Trinity, Augusta, now, then, now, then! 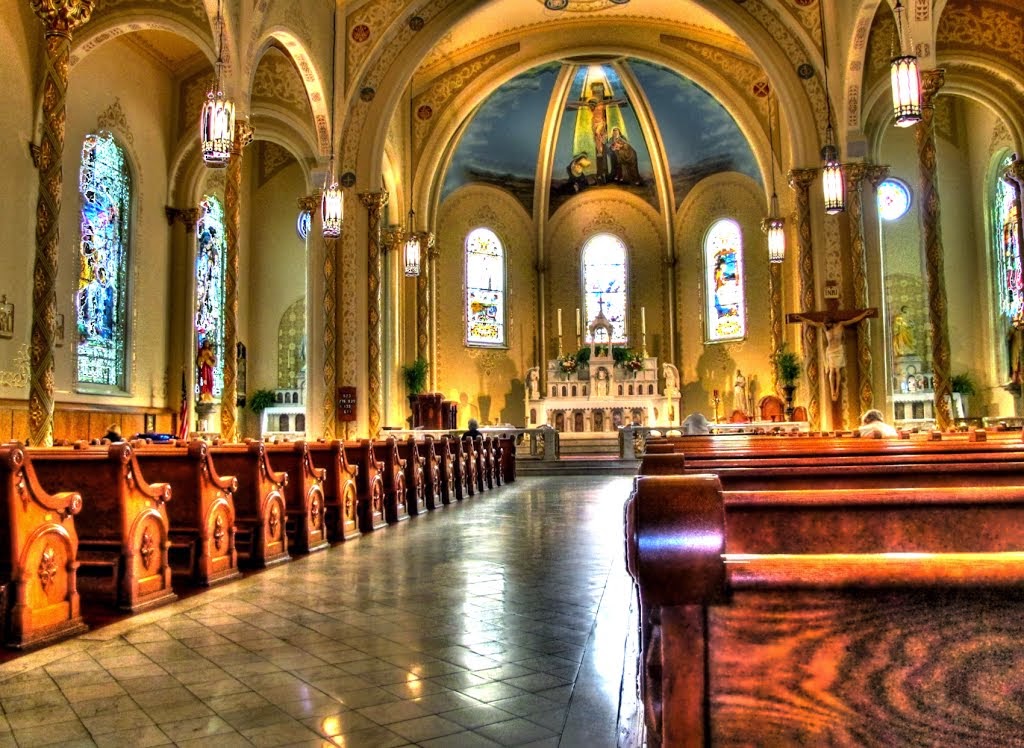 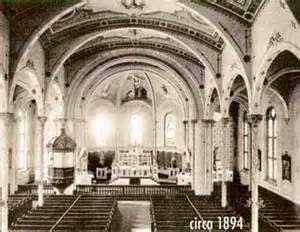 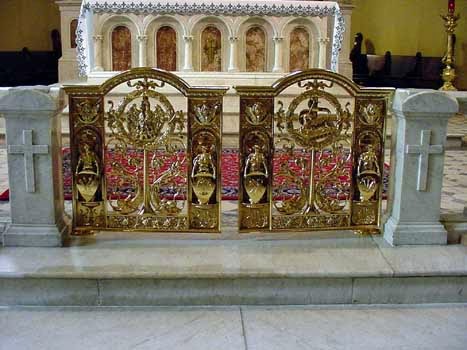 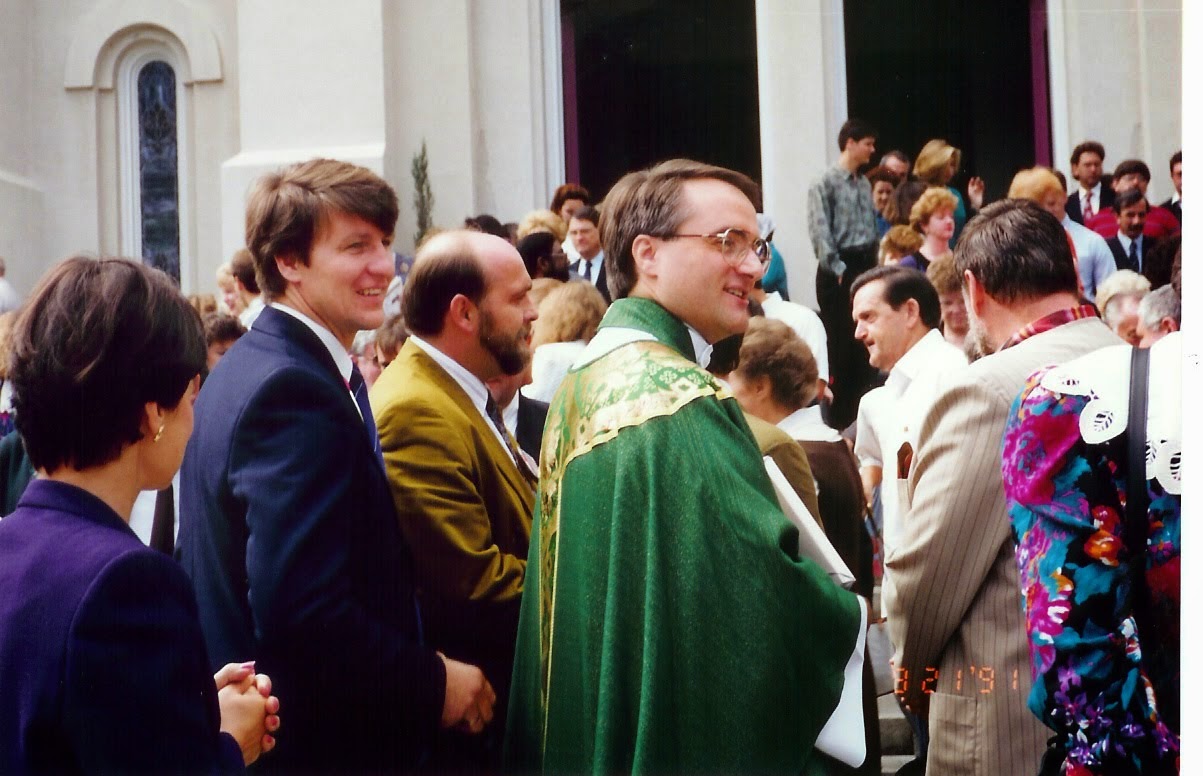 The pastor of Most Holy Trinity, Father John Barry had to contend with phenomenal growth in Augusta produced by the Irish potato famine that brought Irish Immigrants to Augusta to work on digging its canal to feed the needs of its large textile industry fueled by cotton. Savannah had a similar immigration in the 1840's.

Most Holy Trinity has its roots in the late 1700's when French Catholics had migrated to Augusta. The French eventually were deeded the property in downtown Augusta where they built a little wooden frame church building. But with the influx of Irish in the 1840's it was added onto to make it cruciform.

By the 1850's Father John Barry, its pastor for some 30 years,  saw the handwriting on the wall and made plans for a new church that he hoped one day would become a cathedral. By 1857, Father John Barry was the second Bishop of Savannah. He laid the cornerstone for the new church and as an olive branch to the French who were smarting with the Irish take over of their parish, he placed it under the patronage of the French saint, St. Vincent de Paul.

Bishop John Barry hoped to move his cathedral from Savannah (which had none at the time) to Augusta to get away from the ravages of Yellow Fever there. Unfortunately, on one of his many trips to Paris, France, which he loved and had actually procured beautiful brass altar gates there, he died in the early 1860's. He was brought back to Savannah and buried in the Catholic cemetery there.

In 1863 in the midst of the War Between the States, Most Holy Trinity was completed and consecrated. But by this time the Irish were in control and changed the patronage of the church from Saint Vincent de Paul of France to Saint Patrick of Ireland on Easter Sunday 1863 by vote of the clergy and laity! Then the church was called by popular piety Saint Patrick Catholic Church, although its official name of Most Holy Trinity was never changed--it remained the official name but soon everyone forgot that!

In 1970 when two other downtown parishes were merged into Saint Patrick's building, the original name was recovered, Church of the Most Holy Trinity. Many thought it was a new name to honor three parishes becoming one, but it was going back to the official name.

In 1998 with the addition of a new sacristy to the church, as the foundation was being dug, a large iron statue was discovered that had been buried. It was exhumed  and turned out to be a large statue of the same size as two other cast iron statues in the Church and it was St. Vincent de Paul. It had be crushed and buried behind the church! I wonder who did that after the Irish had named the church Saint Patrick? The other two large cast iron statues still in the church are of the Sacred Heart, and you guessed it, Saint Patrick!

But Saint Patrick is still honored in Augusta with a Saint Patrick's Day Mass at the Church of the Most Holy Trinity under the Patronage of Saint Patrick (and Saint Vincent de Paul) and the parade that follows that passes in front of it and its proud heritage. The 1857 Church is still referred to as the "new" church, btw! 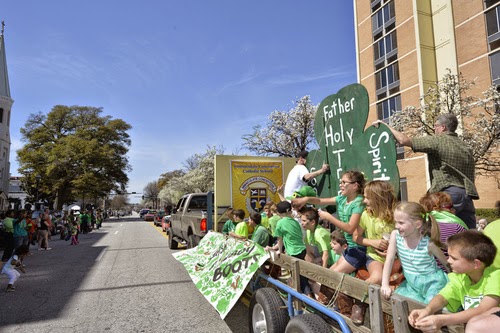 A great photo of the new church in the background: 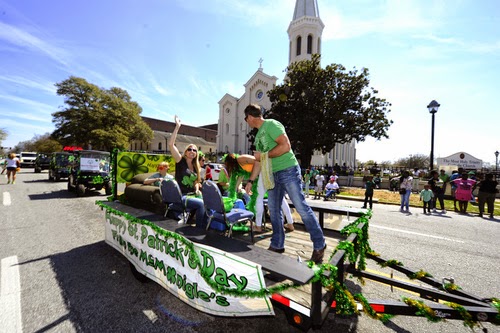 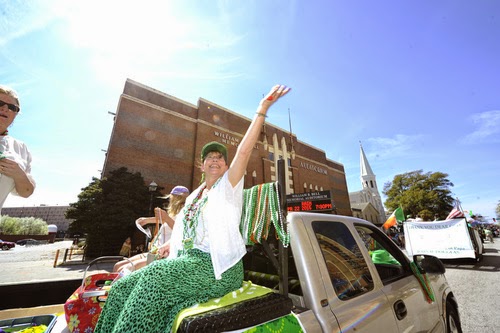 Judging from the top photo, it looks like there's no (permanent) freestanding altar. Is that correct, or was the mensa moved forward and we just can't see it that way?

The mensa was moved forward in the late 1960's but poorly so and it ended up being at the edge of the 4th step that led to it.

In 1998 or so I had the whole altar and reredos dismantled, and the reredos was pushed back toward the back wall which had an inordinate amount of space behind it. Then the mensa was moved back to its original position and the steps were reduced to three.

So today you can celebrate the Mass on either side of the altar whereas with the 1960's arrangement you couldn't do it ad orientem. However from the congregation, it continues to look like a unified altar/reredos as it always has.

Sorry, I don't know why I keep spelling out the "Mac".

Thank you Father for being a Catholic priest!

What John said, Father. Priests like you do the Catholic world a ton of good. :)

My hope and prayer is that one day in the near future at MHT the mensa and reredos will be reconnected, Mass will be said ad orientum, the paintings of Our Lady and St. Joseph in the sanctuary dome adjacent to the Crucifixion scene will be restored, the old stations of the cross missing since the 1960's will be found, and that we will once again be permitted to receive Our Lord kneeling at our magnificent, intact marble altar rail.

Hopefully, the parish will never return to the population of 37 families as found during the late 1960's. However, if the trend continues, Augusta might be the the home of not only the Sacred Heart Cultural Center, but the Most Holy Trinity Cultural Center as well.

May God have mercy on the Catholic Church of the Most Holy Trinity.

I'm afraid those stations are long gone. I had hoped to replace the ones that are there with ones that approximated the original stations and that could certainly be accomplished now even easier through King Richards which salvages stations from older churches that are being closed.

When I was there and we had 1400 families, only about 300 of these lived in our parish boundaries, the rest came from Columbia County, Aiken County and the other two parishes in Richmond County.

The draw, of course, was our traditional architecture and traditional liturgy, although the 12:30 PM Mass had a Gospel Choir and that attracted people too.