THE DEVIL YOU SAY? HOW THE SECULAR MEDIA MANIPULATES THE POPE TO PROMOTE ITS UNGODLY SECULARIST AGENDA 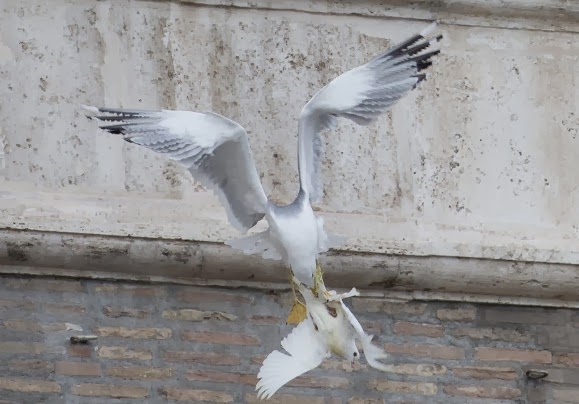 This story is on my Yahoo Search Engine this morning (keep in mind there was no story yesterday on Yahoo about Pope Francis chastising Notre Dame for its shame and calling them and all Catholics to fidelity to the Magisterium of the Church, her doctrines and moral teachings! No story whatsoever!)

This is what the liberal press is doing and under the influence of Satan, trying to make Pope Francis look like the anti-Christ or an anti-Pope. Why? to cause confusion and distrust of the pope in rank and file orthodox Catholics and they do so gleefully. Strike the shepherd and scatter the sheep, this is the mission of the devil! The press did it to Pope Benedict in a not so veiled way, but they are also doing it to Pope Francis but in the darkest, most covert way possible. 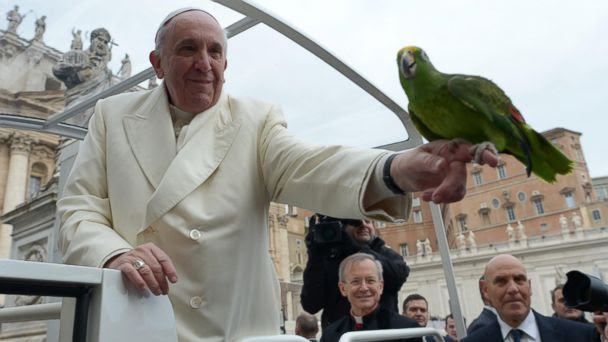 L'Osservatore Romano/AP Photo
Pope Francishas dined with homeless people, made the cover of Time and Rolling Stone and now has blessed a parrot belonging to a male stripper.

“It was fun,” Lombardi told ANSA after meeting the pope. “A sort of mixing of the holy and the profane.”

Lombardi said Amore parroted back “Papa,” which the crowd was chanting at Pope Francis.
Lombardi, who has also been the head of the town council of Trezzano, near Milan, told ANSA that he attended the pope’s general audience with his wife and two daughters.

Pope Francis’ bird blessing comes days after two white doves released by children standing next to him were attacked by a crow and seagull in St. Peter’s Square as tens of thousands of people watched.

With a few feathers lost, the doves managed to break free and fly away, though it’s unclear what happened to them.

At least it wasn't a rooster.