LEST ANYONE THINK THAT THE ONLY REASON POPE FRANCIS CELEBRATED MASS AD ORIENTEM IN THE SISTINE CHAPEL BECAUSE THERE WASN'T ROOM FOR A FREE-STANDING ALTAR THINK AGAIN, PHOTOS DON'T LIE!

There are some skeptics still in denial about the orientation of Pope Francis' Mass in the Sistine Chapel who are promoting the most absurd contention that he used the historic altar rather than a portable altar in front of it because there wasn't enough room for it given the large number of people in the Sistine Chapel for the baptism of 32 babies.

Photos don't lie. There is plenty of room in front of this altar before the congregation begins for a free-standing portable altar to be placed conveniently for the Pope to use by the "Floreria Apostolica" who do these things with great efficiency!

On top of that, Pope Francis met this morning with the staff and families of the Floreria Apostolica which is the Vatican Office that deals with furnishing and decorating the Apostolic Palace, the Paul VI hall, St Peter’s Square and all Papal Basilica’s.

This group not only decorates but also puts up and tears down the altar that is needed for outdoor Masses at St. Peter's, as well as the papal throne outside and prepared the Sistine Chapel for the Papal elections and the first Mass there after the election. They are very efficient and I saw their work first hand at the outdoor Masses I attended in Rome and saw how quickly after these Masses they disassembled everything and put it away almost in a split second!

Please note how much room there is for the portable altar in front of the historic altar in the Sistine Chapel: 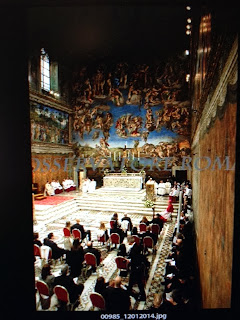 Some other glorious shots: 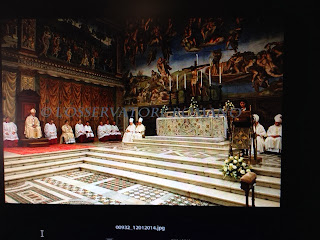 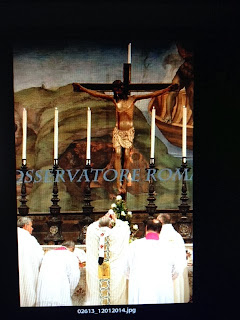 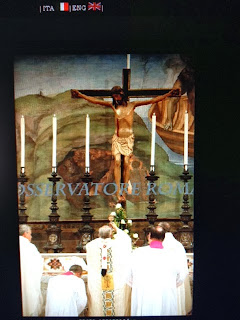 I don't know if my eyes were playing tricks on me, but for the occasion were they using a different baptismal font? If I remember, the one used before was some kind of a modern art piece.

No, it was the same modern font as last year. I rather like it, and am glad that the Church is still commissioning work from artists.