The following story appeared in the Augusta Chronicle on Saturday, January 4, 2014 and explains how this event is a great ecumenical step forward to Christian unity! 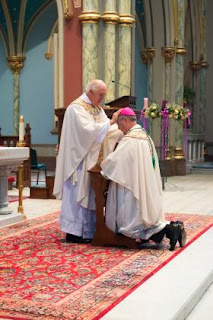 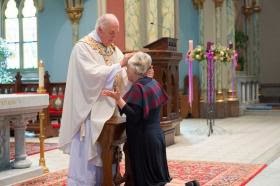 On Dec. 12, 50 years and a day after being ordained an Episcopalian priest, he became a part of the first steps toward unity among the Anglican and Catholic churches when he was ordained a Roman Catholic priest.
It was a historic moment for the Diocese of Savannah. Though Episcopalian priests have been ordained into the Catholic church within the diocese before, Lindsey is the first Anglican priest within the diocese to be incardinated into the Personal Ordinariate of the Chair of St. Peter, which was created by Pope Benedict XVI on Jan. 1, 2012. The ordinariate is similarly structured to a diocese, with an ordinary, equivalent to a bishop, reporting to the pope. The Ordinariate brings Anglicans into full communion with the Catholic Church while allowing them to maintain elements of their Anglican heritage.

“With (unity) as kind of a continuing and lifelong prayer, the whole process of what opened up with the Anglican Ordinariate being able to be unified with the Catholic Church has been something that’s been in the background of my mind the whole 50 years,” he said.

The Anglican Church split from the Roman Catholic Church in the 16th century, after a disagreement between the Catholic Church and King Henry VIII over the the annulment of the king’s marriage led the king to form the Church of England.

“We’ve had that separation from the Anglican community and Catholic community for over 478 years,” said Bishop Gregory Hartmeyer of the Diocese of Savannah. “Pope Benedict XVI was the one who was able to bring the unity between those who want to return to the Catholic faith. (Now) they can do that with a profession to the Catholic faith and papacy.”

Lindsey, who has been assigned to St. Mary on the Hill Catholic Church, did not set out to bridge a gap.

He was working on a cattle ranch in the late 1950s in Oklahoma when he felt called to be a priest. On Dec. 11, 1963, he was ordained. Since the 1970s, he began to grow increasingly disheartened with some of the changes he saw taking place within the Episcopal Church, and began to feel a sense of disunity.

“It was becoming increasingly difficult to maintain the faith position that I had grown up with and had been accustomed to and committed to all of my life,” he said. “With that going on, that was certainly a matter of prayer for me. I was just looking for a way I could continue to grow spiritually.”
Lindsey felt the Catholic Church offered that opportunity for both himself and his wife, Jeanne. He said the transition period has been richly rewarding spiritually.

That the Catholic Church recognizes Lindsey’s marriage as valid though he is a priest is very important to him.

“One of the neat things about my ordination down at Savannah was that the Bishop Hartmeyer very graciously recognized her role in that 50 years of ministry. That just really touched my heart a lot, because she has been such an important part of that,” he said.

Lindsey will maintain some of his Anglican traditions at St. Mary, such as an Anglican Youth Mass he will conduct on second Sundays at 3 p.m.

Hartmeyer said he hopes that Lindsey’s ordination will open the doors for continued discussion with other communities that separated from the Catholic Church during the Protestant Reformation.
“It would not surprise me if dialogue does not continue to offer similar gestures to the Lutheran community,” he said. “I hope to see greater dialogue with other faiths to bring a greater sense of unity to the Christian world.”

The Pope could allow married priests starting today. I wish he would. I think he should.

The problem with a married parochial clergy would be as follows:
1. It would create two orders of priests; one which would be eligible for the episcopate, and one which would not (the Latin Church is hardly likely to go further than the Greek Church and allow married bishops).
2. Diocesan clergy often have to be moved at short notice. This would not be feasible if they had families with children in school.
In the CofE clergy apply for their jobs, as in any other profession.
3. In the CofE priests may marry after ordination, in the Protestant tradition. In the Apostolic Churches a man may not marry after taking deacon's Orders. So a young man who wishes to combine the vocations of marriage and priesthood might be in too much of a hurry to tie the knot, and you know what they say about marrying in haste.

Although a celibate clergy is a matter of discipline rather than dogma, it was enjoined by the Council of Nicaea in 325 and by the eleventh century clerical marriage was regarded by Rome as an abuse, although it persisted for some time after that.

Anglicans sometimes need to be reminded that their schismatic and heretical status as Protestant ecclesial community was a result of Acts of Parliament passed during the reigns of Henry VIII and Edward VI, repealed under Mary I, and re-enacted by Elizabeth I. The Episcopal Church of the USA might not be "by law established" but the organization to which it is affiliated (loose as this affiliation may be) most certainly is.

I can see a new category for annulment petitions: clergy who marry prior to ordination out of fear of losing the privilege to do so after ordination.