SACRED MUSIC IN THE MASS AND THE DIVERSITY THAT IS POSSIBLE, NOT FORBIDDEN 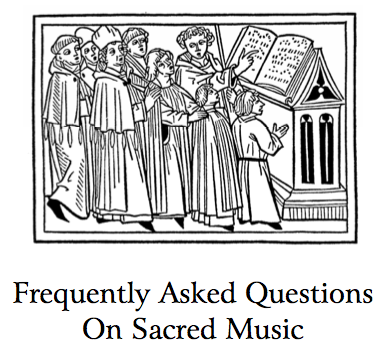 Liturgical music, apart from the shrill voices who advocate one form of the Mass over the other, in terms of the EF/OF controversies, is perhaps the most contentious issue in the Church today.

The reason for this is that since the Second Vatican Council and especially in terms of "inculturation" and taking into account new idioms of music in culture that should be considered for the Mass, we have had a wild ride in discovering what is good and what really isn't.

Even in the period of inculturation of various pagan practices into the liturgy such as the dates for Christmas, Easter, All Saints, etc, but also incense, garb of the pagan court, etc which occurred in the early Church and accelerated after Constantine, there had to be a selective inculturation, not a "baptizing" of all things secular or pagan.

Today we are at a precarious juncture in acknowledging that much of the newer liturgical music allowed for the Mass today is not proper inculturation but an aimless picking and choosing of secular genres and religious genres that are not appropriate for the Latin Rite of the Catholic Church.

The same would be true of hymnody developed by the Protestant denominations after the Reformation. Here I am thinking of wonderful classic Protestant hymns that clearly have a Protestant ethos, culture and theology. While these are not doctrinally incorrect as far as Catholic teaching, their spirituality and ethos is decidedly Protestant and not of the culture or spirituality of the Latin Rite Church.

For example most of us like "The Old Rugged Cross" and "How Great Thou Art" and even "Amazing Grace" yet all of these have a decidedly Protestant flair similar to the Eastern flair of the chants of the Eastern Church. These hymns belong in the proper religious tradition in other words.

Now I have a disclaimer, our hymnals over the years have included wonderful hymns from the Protestant Tradition, especially the very good ones from the Anglican tradition as well as the Methodist tradition, especially those written by the Wesley's. "Hark the Herald Angels Sing" is a Protestant Christmas Carol that has been warmly embraced by the Latin Rite and most Catholics would not know that this is a Methodist hymn. The same is true of "Amazing Grace" and a number of other wonderful hymns that we have warmly embraced.

Another problem, and I would say the major problem, is the contemporary, trendy music we have embraced in the Latin Rite usually of a secular mode with sacred words replacing secular ones. Today, this usually means sounds that sound like Broadway musicals with religious words. But rap, jazz, rock n roll and the like have also been used.

For younger people, the problem isn't traditional Protestant hymns, but non-denominational (Protestant) worship and praise music that is of a secular brand in terms of melodies not words and the sacred words tend to be monotonous and banal.

Those Catholics of my generation and older can also be nostalgic for the folk music that was first introduced into the Mass in the late 60's and its derivatives that were much better, although still lacking, later on in the 70's and 80's such as the most popular like "Be Not Afraid," on "Eagle Wings," and "Here I Am Lord" amongst many others.

Because the Latin Rite since Vatican II has been willing to embrace so many genres, we have lost our spiritual and devotional genres typically associated with the Latin Rite. This has not occurred though in the Eastern Rite and God bless them for this!

Can there be a compromise though? I think so. Can't we simply view the wide variety of genres that are now permitted in the Latin Rite as "filler music" that can be used as preludes, postludes and filler during the Mass? I think so, but with the caution that those who choose this music clearly study the theology and doctrine of the words to make sure these are appropriate for the Catholic Mass and our Tradition!

The same is true of the Offertory Chant. It is chanted and then any other filler appropriate in theology, spirituality and doctrine is chosen, usually tying into the readings of the Mass and the point of the Preparation of the Offerings.

The same is true of the Communion Chant. It should be chanted first and then something else could be sung following it to cover the time that people approach the altar for Holy Communion.

The Liturgy of the Latin Rite does not prescribe a recessional hymn, so there is no official chant for this. So this is wide open for choices in my mind. It is customary, though, to chant a Marian chant and there are different styles of this for Ordinary Time, Christmas Season and Easter Season. Pope Benedict and Pope Francis have both recovered this tradition at the Vatican Masses, but not to exclude and additional recessional hymn.

My final comment: There are many contemporary and Protestant hymns that I personally like. I think my compromise above respects the Propers of the Mass and the chant modes in which this may be chanted while not eliminating other hymns altogether.

We should also explore what are appropriate melodies and styles of singing the actual parts of the Mass, such as the Kyrie, Gloria, Credo, Sanctus, Mystery of Faith, Great Amen, Pater Noster and Agnus Dei.
Posted by Fr. Allan J. McDonald at Monday, January 20, 2014

As one who has ventured from anglicanism into the Catholic Church (for which, laus Deo), I do have to say that the practice of finishing hymns half-way through is somewhat distracting.

My suggestion for the beginning of Mass (which I have seen in a number of anglican places) is that the hymn is begun and then at the appropriate point during it the sacristy bell is rung, the congregation rise, the procession enters...thus allowing the hymn to be sung in its entirety (for the edification of the faithful) and still allowing for the proper introit to be chanting during the initial censing of the altar.

I'm surprised you haven't picked up on this story:
http://thatthebonesyouhavecrushedmaythrill.blogspot.co.uk/2014/01/mahony-and-francis.html

The true theatre of the absurd when Francis and Mahoney concelbrate a Mass, and Francis reads the riot act about the sex abuse and cover up... yet Mahoney, smug careerist, ego-maniacal cleric he is, doesn't even bat an eye, even though he is responsible for many cover ups! I guess the liberals can do no wrong, and the trads can do no right (except be "shrill").

You clearly missed my post on that and I suggest you go to the index and look it up. And on top of that Pope Francis had an audience with the Cardinal following the Mass. Of course, we don't know what they spoke about but I suspect it had to do with upholding the new Archbishop's request that Cardinal Mahoney take a lower profile in the archdiocese precisely because of the horrible scandal that he is directly responsible for, but I'm not clairvoyant and no one has released the transcript of this private meeting to the public.

Back to the music part of this thread: You lost me out of the chute with your first statement that I understand to mean you would allow for a modern, Protestant, or whatever hymn. I can allow that there are wide number of musical settings one might have, but the lyrics MUST reenforce the faith.

This was a report of that meeting after Mass concelebrated with the Pope:
..."Later that morning, Cardinal Mahony met with Pope Francis, and the two discussed the needs of migrants, according to the retired Los Angeles archbishop."