DOES NOT GOING TO THE PERIPHERY MEAN THE LITURGICAL ONE ALSO?

What kind of liturgists has Pope Francis appointed as new cardinal-elects? Well, we know that more than likely they will be quite pastoral and willing to go to the periphery of the Church and society. One in particular, Abp. Gualtiero Bassetti, Perugia-Città della Pieve (Italy)  has had the sensitivity and the nobility to celebrate the Extraordinary Form of the Mass at the far periphery that not even progressives will go: 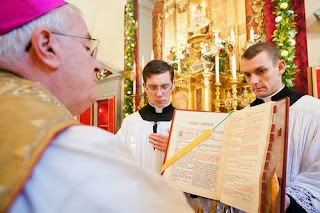 I wish at least one of our Georgia Bishops would go to the "liturgical periphery" and celebrate the Extraordinary Form . . .