POPE FRANCIS SOUNDS PRETTY ULTRA-ORTHODOX TO ME AND YOU KNOW WHY? BECAUSE HE IS! 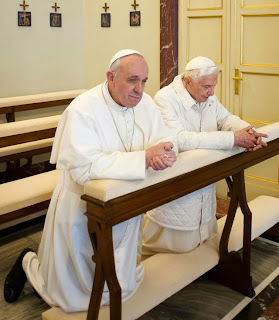 Pope Francis: Doctrine is not abstract but must serve the people of God

Pope Francis on Friday addressed participants at the Plenary meeting of the Congregation for the Doctrine of the Faith, saying their task is to ensure that people receive the faith in its purity and its entirety.


Susy Hodges reports on his address:

Quoting from his Apostolic Exhortation, Pope Francis said right from the earliest times of the Church there has been a temptation to consider the doctrine in an ideological sense or to reduce it to a series of abstract and crystallized theories. But in reality, he said, the doctrine’s sole role is to serve the life of God’s people and is meant to ensure a solid foundation to our faith. There is a great temptation, he continued, to take control of the gifts of salvation that come from God to domesticate them, maybe even with good intentions, according to the views and spirit of the world.

However, safeguarding the integrity of the faith, the Pope went on to say, is a very delicate mission entrusted to them, always in collaboration with local Pastors and with the Doctrinal Commissions of the Episcopal Conferences. It serves to safeguard the right of all the people of God to receive the depository of the faith in its purity and entirety. In their work, he said, there is always a need to maintain a constructive, respectful and patient dialogue with the other parties and show charity and fraternal help.

The Pope concluded his address by thanking the participants for their work in handling serious crimes, especially cases involving the sexual abuse of minors by clergy. He urged them to think of the wellbeing of children and young people, saying they should always be protected and sustained in their human and spiritual growth. The Pope said in this regard they are studying a possible link between the work and the Congregation for the Doctrine of the Faith and the special Commission for safeguarding children which he has set up and which is intended to be an example for all those wishing to promote the wellbeing of the young.

The reality is the damage has been done. The pope because of his imprudence allowed the worldwide media to distort his words and actions. Neither he or any of his spokesmen corrected these impressions. In fact, if truth be told, the pope doubled down on his behavior and his speech. Once instance glaringly comes to mind. It is the time the Italian president thanked the pope, to his face, for not teaching Doctrine and for allowing doubt and also thanked him for not being precise in his teaching. And what did the pope do? He sat there. And when it was his time to speak he never corrected that impression. The damage has been done. The shame is that this pope had the opportunity to correct the out of control disobedience and heresy in the Church, and he did nothing. He was to concerned with making public expression of humility that would please ordinary people who are comfortable in their sin. Another example he stops the confer rail of the title Monsignor on younger priests in order to stop careerism. Well that's good until it was discovered that this didn't apply to priests working in the Vatican. So how is he fixing corruption in the Vatican?That's the real tragedy, everything he does is to reduce the prestige of the papacy because today's ordinary man is uneducated and cannot stand things like formality, tradition, manners, history etc. In that sense Francis is a 21st century pope.

It's nice, but too little too late, I also agree. Although the Pope may very well be fine doctrinally, etc, the perception that he isn't has caused more damage than if he actually were to change anything (which of course he can't do). Perception might not be reality at times, but the perception often is worse...

This Pope has a different pastoral approach. That is not necessarily a bad thing. Yes, he must be more disciplined in his dealings with the press, understanding that there are those who will distort what he says. But we should listen to him, stop and really listen to him, before we so quickly criticize him.

Pope Francis is a pastoral "progressive," while he appears to be fully orthodox doctrinally. When he begins to teach doctrine, especially when it is interspersed with his unique pastoral style, more people will give it an initial listen. That alone is a huge positive.

Come in off the ledge, all is not perfect, but this Pope is not cause for such negativity. He needs to learn, but he seems capable of that. Once he begins to lead in what the Church teaches, things will become more clear. Have some patience and some faith.

Yes, Pope Francis is the Holy Spirit's choice and he is already reaching many different venues that would have been impossible for Pope Benedict. Pastoral progressive, doctrinally orthodox and understanding of the current scene!