CERTAINLY YOURS TRULY MUST BE THE VERY FIRST IN BLOGDOM TO BREAK THIS NEWS IN ENGLISH! 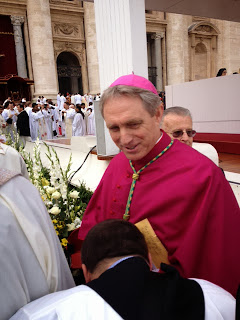 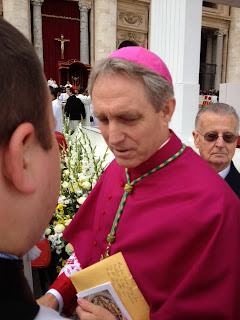 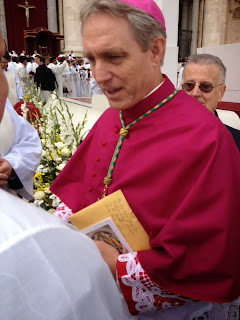 My comments first: I doubt very seriously that the Head of the Papal Household for Pope Francis as well as the on-going secretary for Pope Benedict would be making long comments in the press without the explicit permission of Pope Francis. Is Pope Francis using the "Head of the Papal Household" to correct some of the garbage being reported in the press about the great divide between the Holy Father and the Holy Father Emeritus? It would seem to be so as I would evaluate what Archbishop Georg Gänswein is saying in various interviews and the most recent yesterday on January 3rd!

From the Italian publication Korazym!

The views of Archbishop Georg Gänswein: the reform of Pope Francis and the legacy of Benedict
January 3, 2014
Angela Ambrogetti

"Pope Francis does not want to reform the faith but the faithful".  This is what Archbishop Gänswein said  in a long interview with Bavarian television. The Prefect of the Pontifical Household and the Emeritus Pope's secretary , in the last few weeks has been very present in German media. One way to clarify directly in his homeland many of the misunderstandings that arise especially in the Italian press and American media with regard to the pontificate of Pope Francis.

The Archbishop has a direct role and knowledge of all the unpublished news in the Vatican and is the promoting himself as  the "bridge" between two pontificates, in an interview with Bavarian TV, transmitted the first of January.

Pope Francis has brought to light as you can see the need for reform of the Church: "There is the beautiful expression Ecclesia semper reformanda est, which means that the Church must always reforming. There is one thing that has been understood only yesterday, but it is the experience that accompanies the Church from where it exists, and that is also put into practice. Even a healthy tree can have dead branches that must be cut, this is normal. It is an experience that is being accomplished with Pope Francis, but also that previous Popes have done. Pope Francis has said that on some of the points he wants a new beginning or new developments. We are waiting to see on which points he will be working and how. But I don't see any revolution, and this is not a reaction  that before had not been achieved anything  of what was decided by the Second Vatican Council. I do not see that the Church is in a situation so catastrophic that it is time to put it back on its feet."

Gänswein went on to explain that the message of Pope Francis and in perfect continuity with what has been said by his predecessors: "Pope Francis often stresses that we must get out of ourselves. The Church does not live only for itself. It is a message that Pope Benedict has always pronounced. It is clear that the Church exists for humans and for the faith. Pope Francis does not want to reform the faith, but the faithful. It is an important distinction. The substance of faith and, with him, and his predecessors, and also after him. But this is the importance that the faithful really  live the faith, and there are different forms to live it and that we should support. Where there are wrong forms, it is necessary to help people correct."

In German newsstands in the month of December 2013 there was also another important interview that the Prefect of the Pontifical Household has issued to the political magazine - Cultural Cicero. The German magazine will have in the next issue a interview with Cardinal Marx on Pope Francis.

Georg Gänswein in the interview, released to Alexander Kissler journalist and writer,  also speaks of the vicissitude (?) of the bishop of Limburg and some of the hot themes in Germany.

The Archbishop has clarified some of the passages of Evangelii gaudium with regard to the "conversion of the papacy" and the presence of women in the Church. " The strength of Pope Francis- says Gänswein- together with his gestures and definitely its language is highly imaginative. But an pregnant image  cannot contain the whole of reality. When we talk about strengthening the presence of women many think about the question of the priesthood. But I know of no pronouncement of Pope Francis which suggests that he wishes to change in this sense, as  Pope Benedict had taught." Still Gänswein speaks of the three concepts that dominate the preaching of Pope Francis: mercy, poverty and the Devil. "I see a formation of Ignatian spirituality classic. Pope Francis is a Jesuit in everything. He acts as faithful son of Saint Ignatius of Loyola."

One thing is clear for the German Archbishop: there was in the media the demonization of the Church with the spiritual and theological writings of Pope Benedict, as seen in the great speech of Freiburg in 2011. [that caused the Muslim outcry].

"Each- says Gänswein- tried to interpret it according to its own interests.

I cordially invite you to read the speech by Pope Benedict in Freiburg. We simply acknowledge that Francis realizes what Benedict asked."

And then for the Prefect "the poor Church should not be misunderstood.   Poverty here does not mean misery. The Church must have room for the beautiful, the great, the noble , because these indicate God. Pope Francis has a spiritual concept, not sociological, poverty, that is the poverty of Christ. And it is also been deeply marked by his experiences as archbishop of Buenos Aires during the difficult economic crisis in Argentina."

The inevitable question about choices of Pope Francis that may affect the successors, such as that of living in Santa Marta. "Pope Francis- meeting don Georg- you are not transferred in the papal apartment because it seemed too large and distant. It was his personal decision. On this I have no comment. The papal apartment and more modest homes of many parish priests or bishops in Germany. But I think that in some way this decision will affect the future."

We cannot miss the great value of the pontificate of Benedict XVI: "to an advanced age, Benedict undertook the most difficult task of the world and this heritage is not easy. He devoted all his strength, his ability, his experiences, his entire person to the Petrine ministry. If you think of the many trips abroad, the countless meetings, his spiritual heritage, the book "Jesus of Nazareth", it must be recognized that Benedict XVI spent his energy until the last. It was eight  difficult years for Pope Benedict and eight good years for the Church and the faithful."
Posted by Fr. Allan J. McDonald at Saturday, January 04, 2014

I think is a wonderful interview,
he answer straight all question,
with honest and sincere.
God bless him!!