NO SURPRISE HERE, I AGREE WITH THIS ASSESSMENT OF ATTITUDES CONCERNING VATICAN II

I copy this from the popular liturgical blog, which you can read by pressing:  The New Liturgical Movement. Are you surprised that I agree with what the author writes?

Why is Vatican II So Vexing? 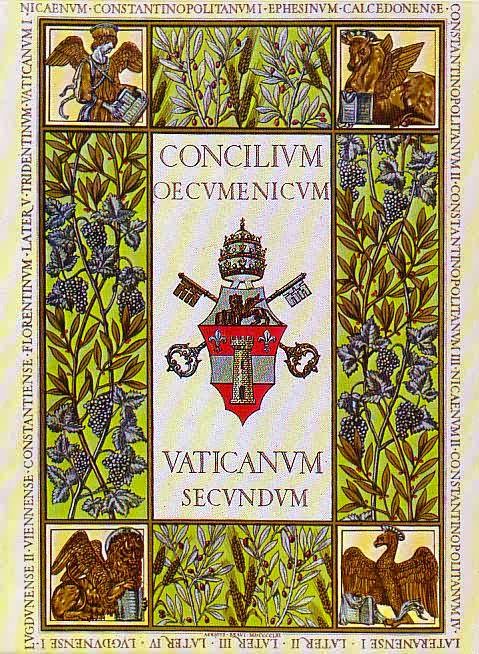 Over the past 20 years, I have often encountered or noticed a curious phenomenon. One might refer to it as “Vatican II weariness.” Briefly described, it is the attitude of being tired out by the very topic of the Council; not really caring to discuss it because the Vatican II just seems so incredibly long-winded in its documents, so controversial, so trapped in its time period—and, well, can’t we just get on with life and stop worrying so much about it?

We had a Year of Faith that was supposed to be dedicated, at least in large part, to a rediscovery and re-reading of the documents of the last Council. Granted, Benedict XVI dropped a bombshell during this Year and pretty much tore everyone’s minds off of his original intention. Still, even if he had never abdicated the chair of Peter, wouldn’t many people be dragging their feet when it comes to re-reading those sixteen documents? Wasn’t the great upheaval of the election of Pope Francis and his megaton interviews a worthy excuse for quietly filing away Benedict’s original script for this special Year? At least many people acted that way. A period of time in which we are ticking off many half-century conciliar milestones appears to be unfolding in an atmosphere of surprising indifference.

I have often wondered what is the root cause of this Vatican II malaise. Some traditionalists would say the cause is the very muddledness and problematic pastorality of the Council itself; but that, of course, is a begging of the question, since people would have to read and study the Council first in order to reach a fair judgment that it’s muddled and problematic—and that’s what we don’t see happening on a large scale. Your typical liberal might just as well appeal or not appeal to Vatican II, whether he has read a single sentence of it or not.

My theory is that it is precisely those who have abused Vatican II by continually ignoring or even counterfeiting its teaching who have produced a situation in which the same Council is becoming increasingly distant, wearisome, vexed, and irrelevant. For example, had there been a clear and humble acceptance of the teaching of Sacrosanctum Concilium, and, therefore, had the Church been free from widespread liturgical abuses and the hermeneutic of rupture that is still the modus operandi of most parish communities, there can be no question that the traditionalist movement would have spent far less of its time critiquing Vatican II as such. Put simply: it was not inherently necessary that the Council become a lightning-rod of discontent. It was made to be that by the purveyors of its "spirit."

If Vatican II dies the death of an irrecoverable failure, it will be solely the fault of the progressives who thought they could ride the horse of Vatican II all the way home to a “new Church,” and who met with considerable success in persuading the world to believe the same lie. As there is one Body of Christ planned from all eternity, sojourning on earth in the unity of faith and charity, and destined to live forever, there cannot ever be a “new Church.” Those who were content to remain in the one and only Church there is can hardly be blamed for turning a deaf ear to so much tiresome twaddle about the Council. Over time, the historical Council insensibly merged with the virtual or media Council, and as a result, the real teaching, the authentic documents, have become marginalized.

Imagine with me a counterfactual situation in which, because the Council had been judiciously received and faithfully implemented, traditionalists of 2014 would be shoring up their spiritual counsels and pastoral plans with frequent citations of the Council, even if they might be uncomfortable with some of the ambiguous language or the novel directions taken in certain documents. But we are now radically polarized, and Vatican II has become a source of dismay because of the liberals and the modernists who insisted on selfishly abusing it for their own agendas back in the 60s and 70s and up to the present. It will be their ignominy in the annals of the Church to be the ones who defeated the hopes of John XXIII by dropping the atomic bomb on the new springtime and leading us into a nuclear winter.

It is no wonder that Pope Francis spoke so highly of Archbishop Marchetto and his correct hermeneutic of the Council. If there is ever to be a future fruitful reception and application of the Second Vatican Council, it will be purchased by that hermeneutic and by no other.
Posted by Fr. Allan J. McDonald at Tuesday, January 14, 2014

Peter Kwasniewski writes some very good articles and I find myself usually agreeing with him.

The 5th Lateran Council proposed war against the Turks, but this provision was eventually abandoned (Lepanto became a postscript). Similarly, at some point, a pope is going to need to tell us what to do with the texts of Vatican II. There are clearly many prescriptions of the VCII that even the pope does not expect us to fulfill. Perhaps the most obvious examples are the requirements that pastors teach the Western faithful their parts of the Mass in Latin, and the requirement that Western clergy pray the Office in Latin. Then there's the issue of doctrinal certainties reiterated by VCII, but which are rarely discussed, such as Lumen Gentium's declaration that "whosoever, therefore, knowing that the Catholic Church was made necessary by Christ, would refuse to enter or to remain in it, could not be saved".
A pope will simply have to step up to the plate (step up to the crease?) and sort out all the confusion. Until then, we just stick to the new Catechism and to the Latin Code.

One of the great faults of liberalism is that it is tedious and boring. Just compare the Baltimore Catechism to any modern day elementary school religion book. The Catechism gives children a precise, incisive explanation of their roles and duties in life while the modern texts give us warm fuzzy language about peace, love and "building community". So it goes with Vatican II. I can honestly admit that I have not read all of its documents (but I have read a great deal of it, especially Sacrosanctum Concilium). The reason I have not read its documents is because they are tedious and boring. Compare the precision of the Council of Trent documents with the silly tone of many Vatican II documents and it becomes even more evident that dissenting liberal forces in the Church hijacked the Council. The mere mention of Vatican II causes me to groan within. Yes, I too have Vatican II Fatigue. It would do us all a great deal of good to just leave old V-II alone for a while.

When I was teaching at UGA not so long ago, there were high-SAT students who had no idea which came first, the Civil War or WW I, the two seeming to them about equally veiled in the mists of history.

I suspect many or most Catholic youth today, both historically and numerically challenged, couldn't tell whether Vatican I or Vatican II came first. Both just a yawn. And now it seems not only young eyes glaze over at incessant references to Vatican II.

Although I was only a teenager when Vatican II ended, I remember the febrile atmosphere of those years. Our parish priest, who had been ordained in the 1930s, said to my mother (who knew him before the War): "There are rumours that priests could be allowed to marry". Her riposte was "in that case, don't expect to pull a dolly-bird. You'll end up with some old boiler".

Thank you for posting this, Father. The subject of Mr. Kwasniewski's article has not been far from my mind of late.

"The reason I have not read its documents is because they are tedious and boring."

Anyone who prays the whole Liturgy of the Hours daily, including the Office of Readings, knows how vacuous and stifling the typical Vatican II reading appears on the thankfully rare occasional day when one is dropped among the Patristic pearls that are prescribed for most days. Upon seeing a Vatican II reading assigned for the day in the Proper of Seasons, surely everyone turns immediately to the Proper of Saints, desperately hoping to find an acceptable alternative reading.

The Vatican readings are even worse if you do the Liturgia Horarum in Latin as I do. Because--other than Sacrosanctum Concilium which is not as bad because in many spots it actually says something (whether good or bad)--Vatican II documents are written in a particularly pretentious and fatuous dialect of Latin that (in my limited experience) I've thankfully seen nowhere else.

Been trying to thin/ of a Vaticanese analogue for Esolen's wonderfully evocative "Nabbish" for the dumb-dumber-dumbest English dialect of the New American Bible that the U.S. bishops require be used for the lectionary because its royalties are required to fund the vast activities and bureaucracy of the USCCB.

As I read these comments, it brings home to me the dilemma that I and many traditionalist Catholics face: On one hand, we dare not take part in any SSPX activities, since they are suspended and we don't want to risk doing anything "schismatic" or outside the boundaries of the Church, albeit boundaries that are more technical than anything else. On the other hand, we cannot help but admire them, especially in their courageous honesty about Vatican II. When one looks at the verbose bloviations of the USCCB on every topic under the sun and compares it with the simple, direct and Catholic answers to modernism by Bishop Bernard Fellay, there couldn't be a more embarrassing juxtaposition. Fellay makes the average U.S. Bishop look just plain silly. And most of the Vatican II documents are written in a similar, pretensious, silly tone.

Anonymous Deserted, I share your sentiments completely. Thank you.