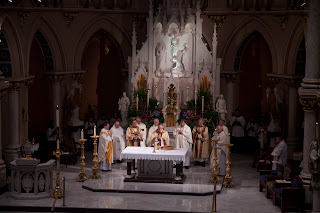 St. Joseph's Easter Sunday Latin Sung High Mass in the Extraordinary Form. Every part of it was sung by the schola/congregation and by me the priest! And we did a darn good job at it! 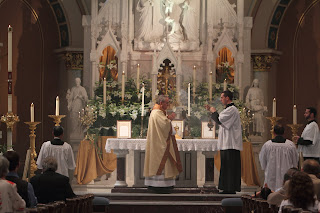 Below is the formal presentation that Msgr. Andrew Wadsworth gave to the Southeastern Liturgical Music Symposium in Atlanta, Georgia, on the topic of "Towards the Future – Singing the Mass."

It took me about 20 years into my ordination, around 2000 to realize that the Mass I was celebrating was not the way the Mass, at least the Sung Mass, should be celebrated. Sure, all the congregational parts were sung and we had hymns for the procession, offertory, communion and recession. It was not until we began a Sung Latin Mass in the Ordinary Form, facing the congregation, at the Church of the Most Holy Trinity in Augusta, GA, that I realized that we were actually singing the Mass for the first time. Our organist and music director Dr. Janet Hunt, FAGO, formed a men's schola for this once a month Latin High Mass. It was sung in pure Gregorian Chant, including the Introit, offertory, and Communion antiphons. A Latin motet was sung at the offertory and another Latin motet at the Communion. I chanted all my parts, including the "Sign of the Cross, greetings, preface dialogue and preface and collects. I found the Gregorian Chant to be a marvelous experience of truly entering into the spiritual aspect of the Mass.

After I arrived in Macon in 2004, I missed the Latin Mass. Then in 2007 Pope Benedict allowed for the Extraordinary Form of the Mass. I charged our music director and organist, Ms. Nelda Chapman to form a men's schola to sing the Gregorian chant parts of this Mass. Once again, we're singing the Mass and I'm doing my part, but now with the EF Mass, I've learned the more archaic note delineation for the preface that is in the 1962 missal. We are singing the Mass, not just singing songs at the Mass.

Below, Msgr. Wadsworth said that in the typical pre-Vatican II parish, the Sung High Mass was not the norm but only celebrated for special events. Most Masses were low Masses, meaning none of the parts of the Mass were sung, but vernacular hymns only at the entrance, offertory, communion and recessional. This four hymn construct was carried over into the reformed Mass after Vatican II. However, I think that most parishes today sing the Mass, except for the official antiphons and the priest's parts. So I'm not sure I agree with him altogether.

Does anyone know what the practice was in their parish prior to Vatican II?

And what about singing the whole Mass, priest and congregation parts to include also the official introit, offertory, and Communion antiphon but with an English chant in the Ordinary Form? We do it here (minus the official introit and offertory) every Sunday at our 9:30 AM and 12:10 PM Masses. Fr. Justin and I sing our parts and all of them and I think somewhat well, without trying to be a braggart.
Towards the Future: Singing the Mass by Msgr. Andrew Wadsworth
Posted by Fr. Allan J. McDonald at Tuesday, August 31, 2010

I wasn't around in the good times when all Masses were in Latin, but isn't there an option for a sung Latin low Mass - the Missa Cantata? That would involve one priest singing the entire Mass in Latin and the congregation/altar servers singing the responses, right?

It seems like both now and pre-Vatican II it would be difficult for a lot of parishes to have the necessary people to pull off a High Mass every Sunday, which might explain the Missa Cantata (seems more "high" given the singing, but doesn't require additional ordained personnel).

I'm no expert, though, as I'm still trying to learn all this stuff - I was born too late!

But seriously, Father, I really appreciate your learning and saying the Latin Mass here at St. Joseph. We should have a Latin Mass every Sunday! You can do it! PLEASE!