VATICAN II ALLOWED FOR TWO FORMS OF THE ROMAN RITE TO BE CELEBRATED, THE REFORMED RITE AND THE MORE ANCIENT RITE! 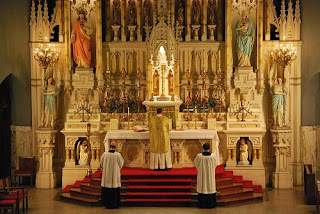 As Cardinal Joseph Ratzinger and as Pope Benedict XVI, the former Cardinal, now Holy Father, has always taught that Vatican II never abolished the older form of the Mass, now known as the Extraordinary Form of the one Roman Rite. Vatican II did not reform the now known Ordinary Form of the Roman Rite either, it simply put forth principles which would guide the proper authorities to reform the Mass, but under the authority of the pope. In this sense, Vatican II ushered in an era where there could co-exist the two forms of the one Roman Rite which at the time and even today is considered a "novelty of renewal" brought about by Vatican II as a gift to the Church with little precedence in Church history.

This is what Cardinal Ratzinger said:

It is of course possible that in this area there are reasons which are anterior to any theology and which have their origin in the individual characters of people or in the conflict between different characters, or even in other entirely exterior circumstances. But it is certain that there are also deeper reasons which explain these problems. The two reasons one most often hears are: the lack of obedience to the Council, which is said to have reformed the liturgical books; and the disruption of Church unity, which is said to follow necessarily if one allows the use of different liturgical forms.

It is in theory relatively easy to refute these two arguments. First, the Council did not itself reform the liturgical books; it ordered their revision and, to that end, set forth certain fundamental rules. Above all, the Council gave a definition of what the liturgy is, and this definition gives a criterion which holds for every liturgical celebration. If one wished to hold these essential rules in disdain and if one wished to set to one side the "normae generales" found in paragraphs 34-36 of the Constitution De Sacra Liturgia -- then yes, one would be violating the obedience due to the Council. It is therefore in accordance with these criteria that one must judge liturgical celebrations, whether they be according to the old books or according to the new.

The following is what Cardinal Ratzinger noted are pertinent for Catholics to accept concerning the Ecumenical Council of Vatican II:


CONSTITUTION
ON THE SACRED LITURGY
SACROSANCTUM CONCILIUM
SOLEMNLY PROMULGATED BY
HIS HOLINESS
POPE PAUL VI
ON DECEMBER 4, 1963
III. The Reform of the Sacred Liturgy

seems to me that the priest can do what he wants. I am not sure what all the worry is about if the Pope and Vatican II documents say so, then just do it.
My problem is when it is not done well. A sung mass us great if the priest and Cantor can actually sing. I am usually distract when the electoral or priest uses grand jestures or a false church voice. Just make it authentic and possible.

On a different topic; did I see a real min in mass today. I went to the 12 and was surprised and happy to see a nun in habit. All is not lost; my faith is restored.

The following quotes are from
"The Ecumenical Vatican Council II: A Much Needed Discussion"

"The purpose of Vatican II, in fact, sets it apart from any other Council, especially Trent and Vatican I. Its scope was not to give definitions, nor was it dogmatic or linked to dogma; it was pastoral. Thus based on its specific nature it was a pastoral Council." [55]

"Anyone who, in quoting it [VII], puts it on a par with Trent or Vatican I, and accredits to it a normative and binding force which it does not possess in itself, commits a crime and, in the final analysis, does not respect the Council itself." [30]


"Let me say immediately that not even a single dogmatic definition included in the intentions of LG or the other Vatican II documents. The Council--we do well not to forget this--could not have even proposed one since it had refused to follow along the lines traced out by other Councils...This means that none of its doctrines, unless ascribable to previous conciliar definitions, are infallible or unchangeable, nor are they even binding: he who denies them cannot, for this reason, be called a formal heretic." [58]

"It is licit, therefore, to recognize a dogmatic nature in Vatican II only where it re-proposes dogmas defined in previous Councils as the truth of Faith." [59]

"And if someone passed through that door to introduce into the Church a Liturgy subversive to the very nature and primary end of the Sacred Liturgy...the responsibility for this, in the final analysis, is none other than the conciliar text itself." [171-172]

"[T]he Liturgy which systematically boycotted the versus Domino orientation, the sacredness of the rite, the sense of latria, the irreplaceable beauty of Gregorian chant, the solemnity of gestures and vestments, and kneeling...[was committed in a] boundless cult of man..." [186-187]


"It is to be remembered that no one is morally free before the truth (God, revelation, true religion). Directly willed ignorance that leads a person to reject that which he is duty-bound to know is an act of grave, more irresponsibility; actually, it is the gravest moral mistake..." [211]

"Man himself, for whose salvation God Himself became incarnate and offered Himself as an expiatory sacrifice, was elevated by the Council and placed as the center of ecclesial activity: "Man himself, whole and entire, body and soul, heart and conscience, mind and will' (GS 3). This capsized the thought of St. Thomas Aquinas who taught that God cannot create for ends which are foreign to His own reality." [220]