ATTACK ON POPE BENEDICT, IS THE VATICAN ITS OWN WORST ENEMY? 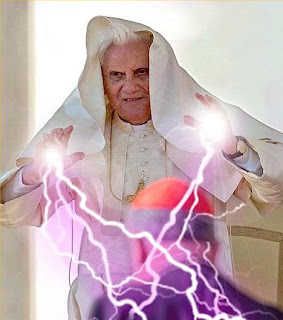 National Catholic Reporter, John Allen, has a rather lengthy review of a book by two Italians on the various dramas of Pope Benedict's papacy. You might get angry at some of the stuff, but I'm afraid the Vatican is its own worst enemy in all of this. I've always thought that John Allen would make a good and credible Vatican spokesman, others would say it would be one more mistake in Pope Benedict's papacy.

The part of the article I like the most concerns Pope Benedict's controversial condom answer on his way to Africa and that condoms made the scourge of AIDS even worse. In a sense the book offers an good defense for the pope's remarks, if only the Holy Father had followed the advice.

This is all a tempest in a teacup brewed up by, once again, the worthless, juvenile, hysterical, lying, *several superlatives Fr. will not allow me to use* media. Fact is, Pope Benedict's and Pope John Paul's Papacies have been responsible for a renewed love for the Holy Church among many lifetime Catholics and a significant movement into the Church by protestants who are looking for theology and doctrine with teeth.

Seconded. I watched and wondered as JP II grew weaker. After he died I found the photo of him at the relatively young age of 55 (I think) walking through a garden). What man's man! What strength! And what strength I did not know that it took to erode and die before a world obsessed with the physical. I believe we saw a miraculous strength. Tempus Fugit, memnto morii.

And now we have BXVI. This man is no intellectual light weight, even by the standards of his peers. I think he knows something, or is doing something that may not be revealed for a while, even after he is gone. Nothing crazy like a prophecy, per se, but something about ourselves as a parent can foresee the results of a child's activity. He is just like JPII in this regard: The faith that bears him through these attacks is not faith as most think of it. He KNOWS the love of God and is absolutely unafraid.