What do you want from KFC? This 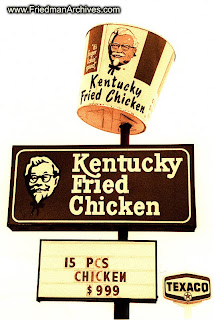 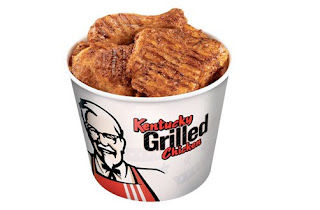 I hear that some franchise owners of Kentucky Fried Chicken, I mean, KFC don't like the loss of emphasis on fried chicken that the company has undergone. Even the name change means something. It's not about fried chicken anymore. It's about Kentucky Grilled Chicken KGC! The colonel would not be pleased these franchise owners say. Kentucky Fried Chicken is meant to be finger licking good!

Sounds like the battle of new Coke, remember? Old Coke was removed from the market and a new and improved version sold down our throats. It tasted sweeter than Pepsi. It missed the mark. People bought Coke, because it was not Pepsi, because it was crisper and less sweet.

Coke repented and went back to the old Coke and new Coke is gone. Some even suggested that the controversy over new coke and eliminating old coke was like the Catholic Church developing the new Mass and eliminating the old Mass.

At least KFC hasn't eliminated its iconic brand, at least not yet until the health police of our puritanical society stop them from frying!

Of course it all could be a publicity stunt to sell more chicken. Many thought that Coke was doing the same thing. Deprive the world of what it wants, create hysteria and then give it back.

Did Vatican II do the same thing? New Mass in, old Mass out; Pope Benedict revives old Mass. Was it all a publicity stunt?

We cannot scrutinize the ways of God! He's above it and so is the Church.
Posted by Fr. Allan J. McDonald at Wednesday, August 18, 2010

I haven't tried the KGC, but admit I am interested. The big question is whether I could bring myself to actually do so after entering the establishment and knowing that secret recipe of 7 herbs and spices is calling to me from behind the counter, LOL.

As for the results of V2 and the old mass/new mass swap idea....I doubt any of the people involved had that aim, but the Holy Spirit may well have had that in mind.

I love the comparison between the cultural "icons" of Coke and KFC with Vatican II. It made me laugh!