Yes, I know this is disgusting, but it being alive in my house is more disgusting! 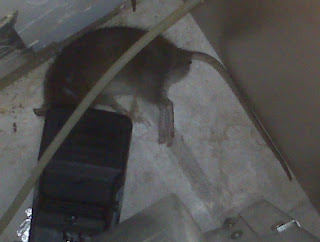 We're still battling a rat infestation in the rectory. I think there is one left out of five, four having succumbed to a rat trap behind our kitchen stove. This fifth rat is elusive and evidently very smart. He or she has walked into the kitchen twice while I was there. So I have images of it in my mind every time I go to the kitchen and when I go to bed.

To make matters worse, my bedroom and sitting room which are on the third floor of the rectory has had visitors too! I had to move some furniture two nights ago and discovered hardened rat droppings in two locations. One location was directly underneath my recliner. This has not gone well for my psychological state of mind, especially at bed time and during the night.

Part of the problem with the rats is that we did some construction on the third floor renovating a suite, adding a new bathroom and totally renovating another, which exposed the rectory to open walls and floor joists. The workers discovered an old, but large rat's nest underneath the tub that was removed. This tub's plumbing works are accessed through a door in my sitting room's closet. Plumbers worked on the plumbing from that closet while I was away and left the door open allowing any rats that lived in the wall to enter my room. I'm hoping that the hardened rat droppings occurred while I was away on vacation during construction.

However in our kitchen we have three rat traps and two sticky pads. But this fifth rat is too smart to fall for these. We've seen no droppings in the kitchen and the exterminator told us that if the rat can't find food, more than likely he's moved out. I didn't buy it.

Last night I left two small potato chips in the middle of the kitchen floor to see if they would be gone in the morning at 4:30 am when I go down for breakfast. Yep! they were gone this morning! All the traps though, untouched.

I put two potato chips on the sticky trap. Let's see if he falls for it. My brothers and sisters this is war. But on the psychological front, the rat has won! I've told Fr. Justin that if I actually see a rat in my room at night, that we're moving out until we can be assured that the rat problem is ended. I've never been in such a situation as this.
Posted by Fr. Allan J. McDonald at Friday, August 27, 2010

You need a cat. I have kittens. Will deliver!

A cat may be a good choice, however have you considered force escalation? I speak of course of chemical weapons (rat poison on said potato chips)?

It's too late now of course, but staking out the previous 4 enemy combatants on spikes like Vlad the Impaler might have had the desired effect on the last hold out, making him flee to safer refugee elsewhere.

Will I be required to confess that?

you will notice that Vlad's efforts were in vain as Romania is still full.

And rats eat other rats so all you have is gross mess and you end up living like rats.

Well, old Vlad was defending against the Turks, not rats, so he did a fair job of it, questionable practices aside ;-)

An Exorcist, Or a Cat, may be needed.

Rats (in my considerable experience working with them in research) are inordinately fond of kitkats - chocolate covered wafer biscuits. Bait a trap with those. Rats find sweet things irresistible !!

I never heard about rats liking sweet things (and I would not want to sacrifice a good Kitkat to catch a rat!!).

But, here in Trinidad, W.I., mice (I know, they aren't rats) really, really like curried beef!! Many years ago, after fruitlessly baiting traps with cheese (the furry creatures had perfected managing to get the cheese off without getting caught), I baited three traps with curried beef - it was taken from the pot I was cooking for our dinner before the meat had become tender but was well flavored. The following morning I had caught 6 mice!

Try it - it may very well work!

Kit Kats or curried beef? I'll try both and have thousands of rats moving in for the feast! I really think I just need a domesticated bob cat or lynx. Thanks for the suggestions, I still think a match to the rectory will do the trick! Just kidding, my luck the rectory will burn down and they'll think I'm an arsonist! Fr. AJM

As long as you don't have other pets, just leave a tray of antifreeze where said varmints can reach it. Tastes like soda! Yum, yum! And deadly as all get-out!

Ah, where is St. Martin de Porres when you need him? He solved the problem by coaxing them to take food placed outside... maybe you can do something similar. Good luck!

I happen to be a rat expert because we had a very bad infestation due to demolition of several old houses up behind us.

Do NOT under any circumstances use poison! They crawl into inaccessible places to die and stink for months.

Ask an exterminator for some of their high powered rat bait - it has an attractant in it. Apply it to the pan on the *large* snap type rat traps. Even a smart rat will find it irresistable. Our Very Last Rat did, though it took a couple of weeks.

We had a rat problem a few years ago, solved by an earlier version of the Rat Zapper:
http://www.ratzapper.com/

Much neater than conventional traps and probably more effective, though more expensive. I see it's now available on amazon.com.

What you need to do is break out the Roman Ritual, and turn to the page on:

The priest vests in surplice and purple stole, and coming to the
field or place infested with these creatures, says:

Antiphon: Arise, Lord, help us; and deliver us for your kindness'
sake.

I cast out you noxious vermin, by God + the Father almighty, by
Jesus + Christ, His only-begotten Son, and by the Holy + Spirit.
May you speedily be banished from our land and fields, lingering
here no longer, but passing on to places where you can do no
harm. In the name of the almighty God and the entire heavenly
court, as well as in the name of the holy Church of God, we
pronounce a curse on you, that wherever you go you may be cursed,
decreasing from day to day until you are obliterated. Let no
remnant of you remain anywhere, except what might be necessary
for the welfare and use of mankind. Be pleased to grant our
request, you who are coming to judge both the living and the dead
and the world by fire.
All: Amen.

Father try buying a Rat Zapper trap. They are easy to use clean and very little mess- best of all no blood or trying to pry that rat trap open and thinking about how much it will hurt if it snaps on your fingers while setting it. Might cost more but they are well worth it. We have used one for a few years- gets everything- even the ones that are sneaky. Once it is set off the electrical charges keep them from trying to escape. We use some peanut butter, grain (we own horses so its handy and the stickier the better but peanut butter does seem to work the best) and and smear it inside at the end. Then pour some cooking oil in on the contact pad. Lol almost sounds like a bizarre recipe. Actually it makes sure the rodent makes good conductive contact with the electric pad.

It even has a light to let you know when you got one or the battery is low. They are easy to clean- just dump it out and possibly hose it if you want (just let it dry for about an hour before turning it back on if you do and take out the batteries before hand). Don't buy the older blue ones- battery life is not so good. Don't worry if it sparks sometimes- it is designed to to that though I must admit it got my attention the first time. Might take a little while for them to get comfortable with it. Best places are along the walls, etc but not in the open. Yes the poisons work but that is only if you are willing to deal with the smell. I have heard tell of antifreeze as well as dried rice or some sort of dried potatoe flakes and considerately leaving some liquid refreshment out. Personally I can't vouch for them. We have had very large empty wine glass vases in storage that proved lethal to mice- not very practical though. In my opinion electricity works the best and the more the better.

While on the topic of pest control of you every have a fly problem you might want to try some Windex (on fine spray- very liberally) usually knocks them down and or a swat above where they are landed with an electric fly zapper usually gets them all. Best time is at night when they are attracted to light and you can lure them into a small room. Hope this helps.

Thank you for your service to the God and the Church. God bless.

You need a small dog. Some breeds specialize in getting rid of rats & mice. And when it's work is done, it will make a great pet!

I’m sorry to hear about the infestation! That’s terrible! I recommend not using the sticky traps because they can take a really long time to kill the mouse and they expose the area to the disease-carrying parasites that are on the mouse. Victor makes a mousetrap that kills the mice instantly and keeps the dead mouse sealed inside, along with any diseases. Here’s the trap you should look into getting: http://www.victorpest.com/store/rodent-control/m265#desc