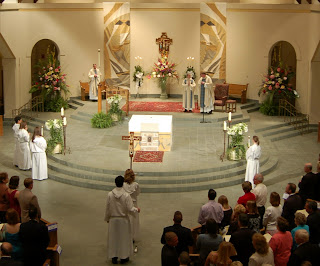 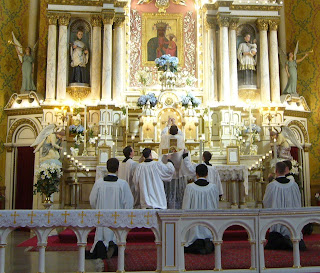 Father George Rutler has a great writing style and uses words in the most eloquent of ways. His article in First Things is long, but well worth reading. It's about the new English translation of the Mass, liturgists, ad orientem worship and the like.
PRESS HERE TO READ IS WELL-WRITTEN ARTICLE, I DON'T THINK HE LIKES LITURGISTS, BUT I COULD BE WRONG!
Posted by Fr. Allan J. McDonald at Friday, August 27, 2010

Not a fair comparison, Fr. McDonald. The second picture is obviously of Mass in a Catholic church. However, no Tabernacle is visible in the first picture, so I conclude it was taken in a non-Catholic church.

Why? Because nothing about that Mass is about the priest or the people. We (priest and laity) take a secondary role in the liturgy. There can be no mistake that the liturgy is not about what we want or what we get. The focus is God and our giving ourselves to him along with the one sacrifice of Christ.

Sure, the same effect happens at the Novus Ordo, but the entire Mass involves a crowd of people constantly waiting for their turn to speak or shake hands or hug or really do anything other than quietly and selflessly giving themselves to God the Father.

These Commissions can rework the English all they want, but people in the pews really need to be taught and understand that what we are doing at Mass is nothing like what Protestants do (ie, we are not at Mass to make friends or hear long discussions about the Bible, etc.). These are problems unrelated to language, but completely related to rubrics.

If you want reverence and awe at the Mass which is caused by understanding the Real Presence and the Holy Sacrifice of the Mass, how about not copying a Protestant worship service that lacks these key elements. If Catholics want to be Protestant, they can go to a Protestant church. For those of us who love our Catholic faith, how about letting us keep our identity and form of worship. Of course, that involves, among many other things, our Sacrifice (Christ himself) consummated in our language (Latin).

I have a lot of respect for Fr. Rutler, he is a clear, and deep thinker, and speaks on issues with an abundant eloquence and understanding. His article is spot on; I just hope there are more priest who think the same. I do believe the Church is heading in the right direction, under the leadership of Pope Benedict, as the remnants of the modernist, anti authoritarian, relativistic church movement of the 60's pass away, a new young vibrant and orthodox Catholic generation is moving forward. The future is bright, but we must stand strong, and make sure the progressives, which are intent of reforming the Catholic Church into something unrecognizable, distorted, and deformed, do not quell our voices. As for the two photos, the top one reminded me of a Star Trek episode, while the bottom drew my attention to our Lord, the Eucharist, beauty and reverence.

I do not think Fr Rutler dislikes liturgists, rather I think that jibe is at himself and those like him. A form of litotes? Anyway, he sees in the Latin the bare and *correct* bones of worship. We know that words can lead to error and translation leads to more words by way of explanation. The name that is named is not the true name, only 'I am'. Everything else is vanity.