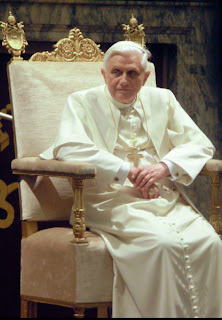 This article in the TELEGRAPH from the United Kingdom illustrates the profound impact that secularism is having on religion in general and Catholicism in particular. It is happening here in the USA too! Read about it HERE.

This article from the CHRISTIAN SCIENCE MONITOR hits the nail on the head too and shows why aging and some not so aging progressive Catholics so despise both Pope John Paul II and Pope Benedict XVI. The Second Vatican Council began in 1962 and ended in late 1965. For about 12 years the "spirit of Vatican II" reigned supreme and wrecked havoc upon the Church. The legitimate interpretation of Vatican II, though, has brought true renewal to those regions that have implemented it. The legitimate interpretation of Vatican II as with all other Councils and Magisterial developments is one built upon the "hermeneutic of continuity" which means develop from what preceded not rupture from it.

For over 30 years now the Magisteriums of both Pope John Paul II and Pope Benedict XVI have been interpreting the Council properly and setting the Church on the proper course. You can read about it here in the CHRISTIAN SCIENCE MONITOR!
Posted by Fr. Allan J. McDonald at Saturday, August 07, 2010