CATHOLIC INTERIORS, ANY THOUGHTS AND INSPIRATIONS? 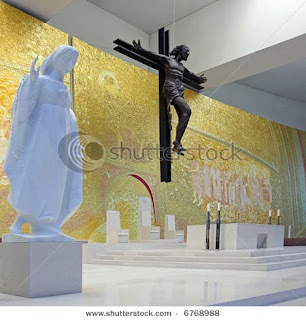 Looking at the altar: 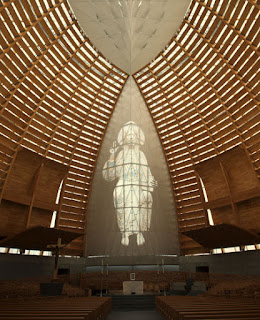 Looking at the door: 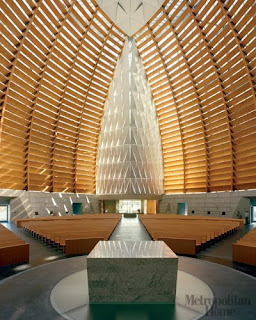 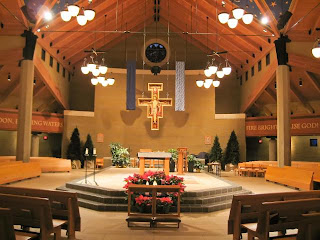 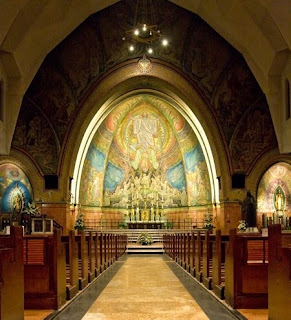 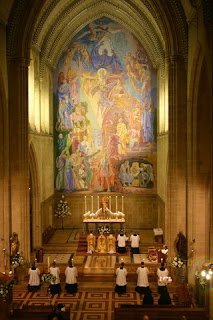 My initial thoughts, a complete divergence between the top two and the bottom two photos, There is no continuity between them, oh yes many of the same elements are their, but how can anyone walk away with the same insight and feeling. The top two are cold, stale, lacking the majesty of the bottom two. The other problem is where is the tabernacle on the top two, the one thing that gives life to the church is not to be seen. the bottom photos draw me in, I immediately see and feel a sense of the sacred, my whole attitude changes to one of awe and gratitude. My mind is focused on our Lord. Modern contemporary art and architecture cannot transmit the transcendent as well as classical art can. Is this because the classical understanding is to create something greater than self, is an outward expression of what is within. Modern seem to speak more about self, and it contradicts the truths of the faith. Last Sunday I invited a co-worker and his girl friend to Mass, she had never been to a Catholic church. After Mass I asked her what where her initial impressions, and immediately she said the majesty and reverence of it all, how she was taken in by the beauty of the service and how the architecture added and uplifted the experience. When I asked him the same he responded in support of what she said, then asked me when he could experience the Latin Mass, I did not expect that! Need I say more?

What Mackja said. He nailed it.

"Beauty, like supreme dominion,
Is but supported by opinion."

You say French neo-gothic is appealing and beautiful, I say Romanesque is best. A Church, by any other name, smells as sweet IF the right incense is used.

Truly, each of the photos demonstrates the some of the best architecture of their respective time periods. Each of them are dynamic, beautiful places that speak to the heart of the believer. Well done!

The Dali-esque stuff, although 'modern', is much more dated in appearance. I do like the middle photos, but the last two are beautiful. In spite of its ornate nature there seems to be less about the artist and more about the Architect.

When I first returned to the Church 4 years ago after an absence of many years I chose a parish based on its appearance. Gorgeous stained glass windows, flying buttresses, very gothic. It looks like what a church should look like in my opinion.

However, after a few months there I began to have the sense that something was missing. I wasn't sure what it was but I believed I would recognize it when I saw it, so I began visiting other parishes in the area. On the fifth Sunday I found my current parish. The building was so ugly that the first time I saw it I decided not to go inside. A week later I met someone who belonged to that parish and she encouraged me to go, so I did. Wow! The interior was somewhat better than the exterior, but the Mass was fantastic. It was so reverent and solemn and beautiful with incense and the sanctus bells. I felt like I had been transported to a different world. And the parishioners were so friendly and all of them seemed to take their faith seriously.

From this experience I learned that the real church is comprised of the community of the faithful and not so much the physical attributes of the building.

I still go to the beautiful church occasionally, but I much prefer my "ugly" parish church.

Teresa M, I have to agree with you. The parish church of my growing up years in Augusta, St. Joseph, was a very modern, low ceiling, simply built church of the 1950's. It has since been replaced, but I loved that church building, because of its intimacy and simplicity. The pastor there, however, always attended to the details of liturgy, beautiful altar cloths, non-cluttered sanctuary and nice vestments, well trained altar boys, etc. The parish was/is heavily influenced by the local army post, thus multi racial and multi-national. It was/is a great place. Fr. AJM

Teresa, you are right about the people being more important than the building. Growing up I would go to a summer camp that was run by the Salesians (Mary Help of Christians) I remember fondly the Mass and how respectful the priest and the brothers where and how they instilled in us this same reverence and respect. The Church was fine nothing spectacular but the community of kids that attended every summer was really great. Brother Lino, Brother Francis, Brother Steve, and Brother John where dedicated and did great work with us kids, I remember them all so well. This post is not about the community, but the interior design, so it is necessary to look at it from a visual perspective only. What does it say to you, how does it make you feel, what does it say about the faith. From that observation the lower two are more effective in transmitting the sacred and transcendent.