JUST WHAT DOES IT MEAN TO CLERICALIZE THE LAITY AND LAICIZE THE CLERGY? 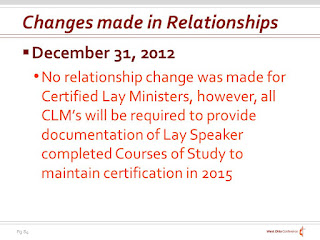 Pope Francis has spoken often about not clericalizing the laity. With so much of Pope Francis' soundbytes, I am never really sure what His Holiness means.

I do recall in the 1980's having a conversation with Bishop Lessard about lay ministries. He said that the laity shouldn't be "Churchified" by being defined with what they do for the institutional church in terms of the liturgical roles opened to them after Vatican II such as lectors and extraordinary ministers of Holy Communion. Nor should the paid positions in the church or even volunteer positions in the Church define their role, such as DRE's, catechists, pastoral assistants and Catholic school employees.

He said that for the vast majority of lay Catholics their role is defined by what they do at home, making their homes the Church in miniature and what they do the the public square, in the secular settings they find themselves. It is there that their Catholicism should attract others to consider the Church, not by prosyletizing, but by simply been a faithful, good Catholic without wearing one's religion on their sleeve.

I have found homeschooling families epitomize what Vatican II actually desired for the laity. They see themselves as the primary educators of their children both in the religious and secular aspects of education. They strive to live their faith in the home and remind me of what Catholic schools were like when religious sisters were in the majority as principals and teachers.

I just received a comment on another post that tells us of the role of the laity too. To become clergy and religious since every member of the clergy or a religious order are laity who desire to devote themselves to the institutional Church and her ministries:

Religious orders of men and women, who do much of the same work in medicine, education, social services, evangelization, caring for the elderly and the dying, etc., were not presaged by the "Deaconesses of the past." They were apostolic undertakings, based on the Great Commandment of loving God and neighbor. MEN's and women's religious orders spring from a common past, the Great Commission.
Posted by Fr. Allan J. McDonald at Tuesday, October 29, 2019