MY CLAIRVOYANCE (YES, I KNOW THIS IS PAGAN, BUT WHAT THE HECK) TELLS ME THAT POPE FRANCIS WILL DECLARE PACHAMAMA TO BE IN FACT OUR LADY OF THE AMAZON NOW TO BE VENERATED, NOT WORSHIPPED, AS THE HIDDEN MANIFESTATION OF OUR LADY TO THE PAGAN AMAZONIAN PEOPLES AS THE CO-REDEMPTRIX OF ALL GRACES TO ALL PEOPLES! 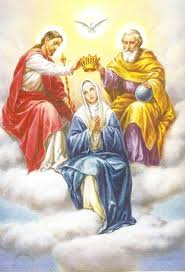 What has happened to Pachamama  sounds eerily similar to Our Lady of Aparecida a devotion that Pope Francis truly embraces.

Vandals take Pachamama, throw her into the River and she is recovered by a miracle of God in time for the closing session of the Amazon Synod and the final Mass at St. Peter's where Pope Francis will say that the Roman Waters of the River Tiber cleanse the image of all pagan mythology and now reveals her to be actually Our Lady of the Amazon, an Icon worthy of veneration with our Lord in Our Lady's Womb, similar to the image of Our Lady of Guadalupe.

Then the Pope, to the delight of traditional Catholics as well as all Protestants and Eastern Orthodox Christians will declare through Our Lady of the Amazon an infallible dogma of Our Lady as the Co-Redemptrix! Read more about that HERE!

From Wikipedia: Our Lady of Aparecida (Portuguese: Nossa Senhora Aparecida or Portuguese: Nossa Senhora da Conceição Aparecida [ˈnɔsɐ siˈɲɔɾɐ dɐ kõsejˈsɐ̃w ɐpɐɾeˈsidɐ]) a title of the Blessed Virgin Mary in the traditional form associated with the Immaculate Conception associated with a clay statue bearing the same title. The image is widely venerated by Brazilian Catholics, who consider her as the principal patroness of Brazil.[1] Historical accounts state that the statue was originally found by three fishermen who miraculously caught many fish after invoking the Blessed Virgin Mary.

The statue is currently housed in the Basilica of the National Shrine of Our Lady of Aparecida in Aparecida, São Paulo, Brazil.

Colonial documents and papal bulls have referred to the image as Nossa Senhora da Conceição Aparecida. The Roman Rite feast day of Our Lady of Aparecida is on October 12, which since 1980 is also a public holiday in Brazil. The building in which it is venerated was granted the title of minor basilica by Pope John Paul II in 1980, and is the largest Marian shrine in the world,[3] being able to hold up to 45,000 worshippers.[4]

Controversy about the statue was ignited in May 1978 by an intruder who stole the clay statue, which was smashed as he was apprehended, from its shrine, and again in 1995, when a Protestant minister insulted and vandalized a copy of the statue on Brazilian national television.
Posted by Fr. Allan J. McDonald at Saturday, October 26, 2019

That won't happen....Not if Pope Francis seeks unity with the Orthodox....