A PICTURE IS WORTH A FEW WORDS, NO? 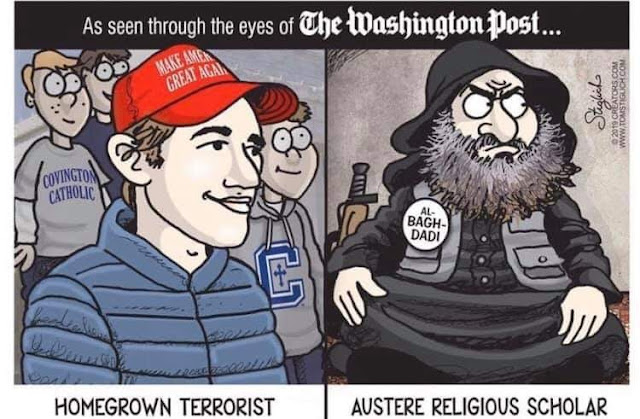 More evidence that modern liberalism is a mental disorder. Keep in mind the Washington Post is allegedly a serious newspaper

Did the WP really publish this cartoon? If so, I find myself in agreement with TJM and they really do need their heads examined, at least on this one point. While there may be some attitudinal similarities at the highest level of abstraction, and whatever else they might be, and unless there is something I don't know, to suggest that the Covington Schoolboys are remotely like ISIS is absurd.

Well we finally agree on something. I think the US national media is the most divisive institution we have and fuels hate. Since it is a dying industry, this is one way to gain attention and clicks. One thing which is disturbing about modern liberalism, is that they appear to subscribe to the notion that the enemy of my enemy is my friend which is the only explanation for modern day liberals kow-towing to radical Islam which throws gays off of buildings and mutilates women's sexual organs and holds them as second class citizens. Modern liberals condemn the only democracy in the Mideast, Israel, while crying over terrorist states being "harmed" by Israel. Old fashioned liberals would be the first to loudly condemn radical Islam.

The biggest problem today and it will never be solved are the internet and 24 hour opinionated news or what Trump calls fake news. When President Nixon was about to be impeached, there was not 24 hour news, but the congressional investigation was televised but there was support for impeachment on both sides of the aisle by that point.

The media today whips people into a frenzy on either side of the divide. If we didn't have 24 hour news, the internet but only radio, 30 minutes of news at night and the newspaper, can you imagine how much more united our country would be now. But that's gone with the wind.

The Democrats are making a huge mistake on this one because Trump has done nothing to warrant this. If the media were honest, they would emphasize that certain crazies in the Democratic Party were advocating impeachment from the moment Trump was elected. If they think a future Democrat president will not be subject to this kind of abuse, they are mistaken.

Too bad you can't post pictures here because a friend of mine sent me a picture of Hillary and Trump together in 2013 and she stated that Trump should run for office because he was honest and couldn't be bought. It was comedy gold. I doubt the New York Times or Washington Post will ever run that little gem. They are no longer newspapers but "viewspapers" adhering solely to their agenda.

When I read your account of Hillary Clinton’s alleged statement regarding Trump running for president, my “fake news” antennae started twitching, so I researched the point—and guess what:

Of course, Trump’s MO is to accuse others of fake news while propagating fake news himself. So doubtless he would say that this debunking of the claim is itself fake news. I truly hope you will not do the same. Reality is not simply what Trump says it is, however much he might try to convince one that it is.

Of course, if you have convincing evidence that all these fact checkers are wrong, then please do share it with us.

“How many fingers am I holding up, Winston?”

I did not say Hillary said he should run for president, just public office (remember Trump used to give her $ and she attended one of his weddings ). I would post the picture of them here and her quote but the technology of this site does not allow it. Hillary has spoken out of both sides of her mouth her entire career on nearly every issue, so her statement should not be surprising.

One site I think you should be looking at on a daily basis is Instapundit, a news aggregation blog run by Glen Reynolds, a University of Tennessee law professor. He displays the stories the mainstream media either suppresses or buries which shows the rot at publications like the New York Times and the Washington Post, the networks, at universities, etc. I think it would give you a very different perspective of life in America today. Unlike Drudge whom I never bother with anymore, Reynolds is not emotional or a sensationalist.

I should have added that your sources, Snopes and Polifact, are left-wing sites, so you should take any of their reporting or facts with a grain of salt. Here is one take on Polifact:

If a Republican campaign spokeswoman says the other party’s candidate “and his special interest allies in Washington are plotting to spend over $13 million” in a race and has verified figures to support that claim and more, she should have nothing to fear from a fact-checking organization. PolitiFact, a national fact-checking effort co-sponsored by the prestigious Poynter Institute and several major daily newspapers, found the Republican spokeswoman’s claim no better than Half True.

If a Republican schools commissioner says an annual standardized test takes “less than 1 percent of the instructional time,” and the actual figure is between 0.26 percent and 0.90 percent of annual class time, a serious fact-checker wouldn’t make a different claim and check that instead. But that’s precisely how PolitiFact found the Republican commissioner’s statement False.

If a conservative advocacy group runs an ad saying Obamacare could cost “up to $2 trillion,” an honest fact-checker would look up the government’s own estimate and see that, indeed, the Congressional Budget Office puts the cost at $1.76 trillion for just the first few years.

If you were a fact-checker yourself, you might reasonably conclude that PolitiFact is biased — that it favors liberals over conservatives. But PolitiFact continues to assert its impartiality.

PolitiFact editor Bill Adair did not respond to interview requests. But liberals defend the organization. They gleefully point to PolitiFact’s lopsided numbers as evidence that a neutral arbiter has declared liberal politicians are more honest than their conservative counterparts.

“The Left just might be right more often (or the Right wrong more often),” writes Chris Mooney of The Nation, ”and the fact-checkers simply too competent not to reflect this — at least over long periods.”

I stand corrected. But the rebuttals in the links, then, address directly the claim you reported rather than my imprecise re-description of it, and thus make them even stronger. I have already seen the picture and the quote. They are in the second Snopes link I posted.

Left wing or not, and the other instances you mention aside, do you accept that the rebuttals of this particular claim are accurate?

Regarding the other instances you mention, I would like to check them out. Do you have links for them?

Thank you for the information about Instapundit. I will check it out too.

Okay, silly, silly me. Finally the penny drops. I am embarrassed to admit that I was completely misled by the “picture.” Although I had serious doubts about the accuracy of the claim and did question it (with “If so,”), I also really believed the claim was that the Washington Post published this double cartoon or these two single cartoons. Of course, it appears to have done no such thing and I may indeed have misunderstood the claim being made in posting the “picture.”

It seems that the “picture” was cartoonist Stiglich’s comment upon the WAPO’s coverage of the Covington Schoolboys incident and al-Baghdadi’s death (although I am unsure now about even this, as I have been on Stiglich’s website and cannot find it). Snopes explains that the headline for al-Baghdadi was in a WAPO obituary and was amended after two hours with a mea culpa by WAPO for having led with it in the first place (although when one reads the entire article for context the initial headline makes far more sense, but who cares about context any more in today’s culture of “instant outrage”?):

In any event, I hope others here are as disturbed as I am by the “dissolution of reality” that we are experiencing nowadays. We need to get a grip, and fast, before it is too late. Deep Fake videos anyone?

I recall that the Washington Post had the obituary entitled correctly initially, then for some unexplained reason changed it to "Austere Religious Scholar." It takes a truly disturbed person (mentally or politically) to do such a thing. I imagine you have seen already how WaPo has been mocked by many using Adolph Hitler's death as an example: Noted Vegan, Artist, Dies.

The left has a virtual stranglehold over the national media and academia, so I think the healing needs to begin there. Like I suggested, looked at Instapundit, and you will see many glaring examples of the rot in both of those camps.

Please cite a source evidencing your recollection, which is clearly contrary to the Snopes analysis.

As a follow-up to my previous post, here are the two Washington Post articles and their respective headlines for comparison:

And here is an article by Trump supporter and columnist Adriana Cohen drawing the contrast between the WAPO coverage of the Covington Schoolboys incident and Baghdadi’s demise:

True to Trumpian form, Cohen accuses others of fake news while propagating it herself. I see no discussion of the actual text of the original WAPO article or of the retitling of the piece after two hours. Thus, unlike the Washington Post, she creates a seriously misleading impression in the minds of her readers and never corrects or updates her piece. Her lapse is even more egregious because she wrote her article days after the WAPO obituary. And she has the gall to accuse others of “fake news.”? I don’t know whether Pompeo referred to the correction in his Fox news interview during the week, to which Cohen refers.

In my observation, this is typical of many in the so-called “conservative” media. They seize on a mistake, whip up outrage over it, but rarely report on the correction of the mistake. I suspect that some (many?) in the so-called “liberal” media do the same. It is unacceptable whoever does it, however. I am completely sincere when I say this. I have no interest in partisan political games. My overriding interests regarding politics are to the truth (as a Catholic) and to the rule of law (as a member of the legal profession) because these provide the indispensable bedrock foundation for anything and everything else.

Of course, this is not to deny that the Post can rightly be criticized for poor judgment in choosing the original title, which would have been better had it said “Abu Bakr al-Baghdadi, Austere and Religious Scholar and Violent Leader of Islamic State, Dies at 48” or some such. And perhaps they should have added the kinds of graphic details Cohen mentions to the following passage:

“Meanwhile, Mr. Baghdadi would soon face other determined enemies, as his extravagantly staged mass executions and beheadings of Western captives evoked fear and resolve in Europe and North America. Terrorist attacks on Paris and Brussels deepened a growing international commitment to drive the Islamic State from its stronghold, depriving it of a sanctuary and a central element of its propaganda.”

This passage may be a reasonable judgment call, however, given the nature of the peace as an obituary rather than political commentary. I would have to compare it with other obituaries to get a sense of the style used.

Correction: nature of the piece, not nature of the peace. Freudian slip about an obituary? I doubt that Baghdadi is resting in peace, although we humans can make no final judgment about the state of his soul, this being rather a matter for God and not for us.