IS THE SKY REALLY FALLING OR IS IT SIMPLY THAT A GREAT SCHISM IS HAPPENING BEFORE OUR VERY EYES?

Synod bishops return for the final day of the synod and also returning in their cassocks. 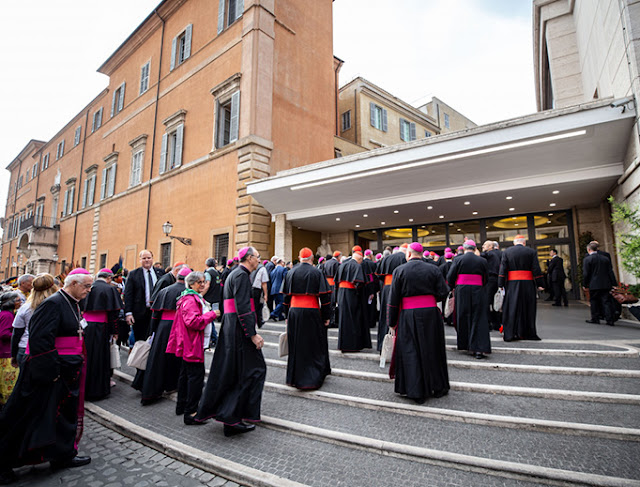 
Pray for a Miracle — An Initial Reaction to the Close of the Synod
Pray for an apostolic exhortation that glorifies and lifts up Jesus Christ as the only way to salvation.
Msgr. Charles Pope
I, like many of you, feel overwhelmed by the events of the past month in Rome. Many an evening, late into the night, I have come before the Lord in the rectory chapel in lament for the confusion and chaos in the Church, the Lord’s beautiful bride and our mother. Oftentimes too in the fourth watch of the night, between 3 and 4 a.m., I return to the chapel, for with my cares I cannot long rest.
Reported from Rome are terrible and seemingly impious things at worst, and confusing and ambiguous things at best. In the final document of the synod are included proposals for married priests on a wide scale and women “deacons.” The Church is currently deeply divided and, I would argue, on the brink of schism, if the Pope includes such proposals in his apostolic exhortation and plan. We must pray for him as never before to hold the line, much as Pope Paul VI miraculously held the line in 1968 when he wrote Humanae
Vitae, upholding the Church’s perennial view of the nature and purpose of human sexuality and the ancient forbiddance of contraception. He did this against pressure from the spirit of the age — a pressure that was even stronger than the pressure Pope Francis currently encounters. And, like Francis, Paul VI was no conservative and was very friendly with the agents of radical change. This makes Humanae Vitae all the more miraculous, and we must allow this to give us hope now that Pope Francis will issue a document that does not take us over the brink.

In case you haven't seen it, George Weigel has a good article on this in First Things:
https://www.firstthings.com/web-exclusives/2019/10/letters-from-the-synod-2019-9?fbclid=IwAR3EXw8cFWIMKIJM3uuI7p6yiX-uHJp9Vftni7WVUs-oeEGdglyVpJN8lRo

Ok, Francis doesn’t believe that Christ was Divine. The man is evil. There isn’t going to be a miracle.

Nobody opened their mouth when this guy started doing crazy scandalous things. He never answered the Dubia and what was Burke’s response, “well he is going to have to answer”. Really! How’s that going.

He ridiculed the entire Curia at Christmas and what did they do, they sat there and took it.

At that first synod when the bishops were upset at Francis for the communion for adultery thing who saved his bacon by going to Pope Benedict and working a compromise, good old Cardinal Mueller. Mueller who then got thrown out with the garbage.

Who made Francis a bishop and cardinal, good old St. John Paul, who was warned but apparently had no power like Francis does and had to go through with it because it was already announced. All these bishops who are for heresy were appointed by John Paul and Benedict. They are the ones who brought us to this point.

John Paul was elected in 1978. The New Mass was only 8 years old. He could have turned things around. Did he forbade communion in the hand, NO. What did he do. He sanctioned altar girls. He let the Cardinal of Belgium destroy the Faith of an entire nation by leaving him in his position for decades. Decades! He allowed bishop after bishop to spread error and heresy and never removed one of them. But Archbishop Lefebrve apparently needed to be disciplined. For what, for daring to speak the truth.Why didn’t JP II remove any modernist bishop! Because He was to busy flying around the world.

And let’s not forget Benedict who DID come off the cross and abandoned us to the wolves. Why, because he was to old to go to World Youth Day. WYD, a completely made up event that is NOT necessary in any way to the life of the Church He didn’t have to make public appearances. Popes NEVER made public appearances like they do these days. JP II started all this rock star pope nonsense. Benedict could still be sitting in the Apostolic Palace playing his piano, signing documents and pointing good bishops and helping the Church by ridding Her of the Jesuits. What a gift that would have been. What did he do. He made a bunch of libs cardinals and then walked away. There isn’t going to be a miracle this time. We deserve what is happening.

Why has more churches broken away from the Catholic Church than from the Orthodox? And another schism is looming.