TO PATEN OR NOT TO PATEN, THAT IS THE QUESTION! AND MORE ON THE "KISS/SIGN/HUG OF PEACE" 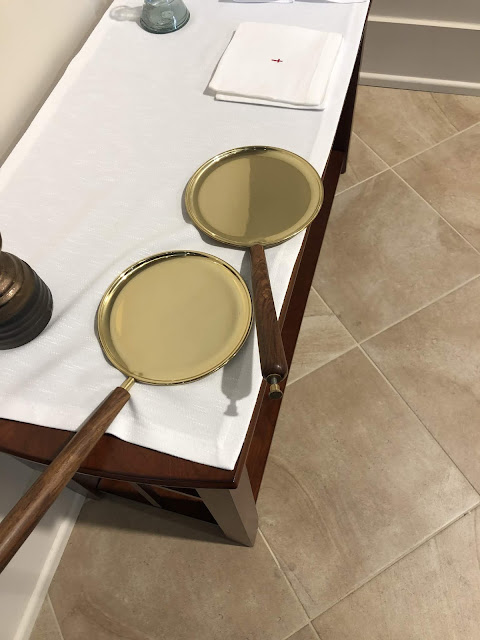 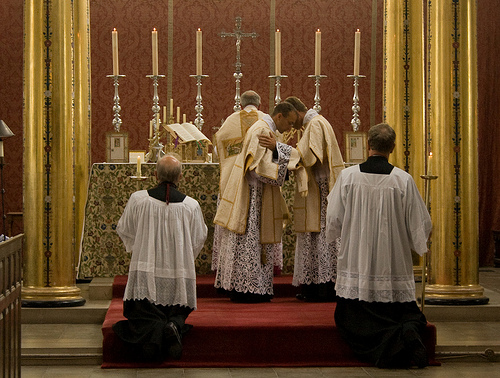 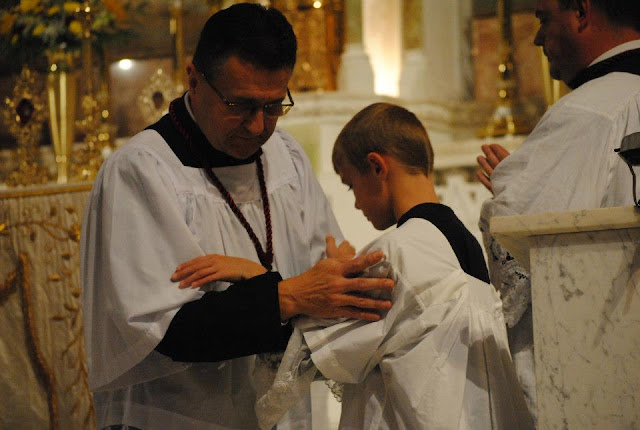 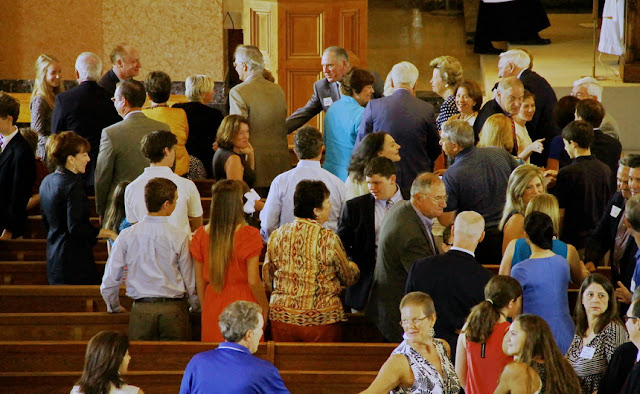 Last month at all our St. Anne Masses, we reinstituted the use of patens. The altar server places it either under the hand or chin of the communicant.

I am not sure how accurately these altar servers would catch a falling Particle, or worse yet, Host if Our Blessed Eucharistic Lord were to fall. We have had numerous times that this has happened in the three years I have been here.

The only parish in our diocese that has used the paten at Holy Communion without ceasing since the Second Vatican Council is St. Joseph in Macon.

I am happy to recover this wonderful sacred tradition here at St. Anne's.

And now more on the Kiss/Sign/Hug of Peace:


In the early 1970's when I worked in downtown Augusta at a nationally known department store (Macy's but in Georgia called Davision's) I would often go to the Saturday night Vigil Mass at the Church of the Most Holy Trinity which was at 6:30 PM. Our store closed at 6 PM and I could literally walk there if I wanted, but drove.

The irony here is that little did I know in the early 70's that I would eventually become a priest  and then be named pastor of this very same parish from 1991 to 2004!

At the time I did not know what to make of it since I had never seen it before done this way (keep in mind this was only two years since the 1969 Missal was promulgated.

Now I realize that it is a take on the Extraordinary Form's Solemn expression of the Kiss of Peace.

Has anyone ever experienced what I described happened in the early 70's in Augusta?
Posted by Fr. Allan J. McDonald at Saturday, April 06, 2019

The paten is also useful for fending off unwanted hugs.

Yes, our parish, St. Matthew the Apostle in the Diocese of Columbus, Ohio, brought back patens about four years ago.

The kiss of peace is also done that way in the Maronite rite. By doing it this way, it becomes very obvious that peace only comes from the Altar of Sacrifice and from the Sacrifice Itself, since the priest, who stands in Persona Christi, begins it at the altar. He passes it to the altar servers, who go down to the pews and pass it row by row to the faithful.

This is a beautiful way to give the sign of peace, and, I think, the only correct way to do it. People coming to the Maronite rite from the Roman rite are always very impressed by the solemnity and reverence shown here.

Fr Fox beat me to it. Our FSSP priest uses it to smack down the hands of people who reach for the Host.

Well, of course, St. John Cantius uses patens for all Masses, even the Novus Ordo, since all communion is offered on the tongue while kneeling. But even for those who prefer to receive communion while standing, if they receive on the tongue a server is standing by with a paten.

With regards to the "kiss of peace" I read an interesting article about it, that in the Middle Ages this passing of the Peace of Christ was done for the entire congregation, especially within religious orders, it seems somewhat in the way Fr. McD experienced it at the Church of the Most Holy Trinity. According to the article, in some places there seemed to be some sort of object, called a pax-brede, that was kissed as it was passed through the congregation.

March 1970. The first Sunday of the Novus Ordo. I was a first-year undergraduate at Durham University and frequented St Cuthbert's Catholic church (an attractive little church and the only one in a city dominated by the great Norman cathedral). The priest was definitely a spirit of Vatican II man, but there was a special Mass for students in term-time and the university Chamber Choir were allowed to sing Latin motets (but not any part of the Mass which had to be in English).

I still carried my 1961 hand missal out of habit, but had realized long since that it was effectively obsolete. My home parish had had no Latin since 1967, and the Novus Ordo was little different from what immediately preceded it. That is, until Fr Trendy invited us to share the 'kiss of peace'.

The result was interesting, to say the least. The couple in front of me (I can still remember her huge CND earrings) went into a passionate clinch and ate each others' faces for the next five minutes. The bloke on my left extended his paw, which I duly shook. Was that it? (I thought). Sadly, no. The girl on my right demanded in a loud stage-whisper 'Kiss me!' Even had she been attractive I would have regarded it as inappropriate, but she was distinctly unprepossessing (and no doubt desperate). I declined the request.

That was my last visit to St Cuthbert's until a friend was married there in 1976, and the last time I attended Mass in term-time. There was a Catholic chaplaincy and a Catholic society (Cathsoc) but since their idea of liturgy was sitting around on beanbags and strumming guitars, I was not interested.

when I was young we still used the paten, was nothing to get a chop to the adams apple from Benny when he was serving, and he got it back in spades. and used to take pride in two of us being able to flip the houseling cloth in one try, then you new you had it down

Egyptian, flipping the cloth too roughly could get you in trouble with the ARS or ladies that care of the linens, vestments, etc. Even my patient wife audibly gasped when one young man whipped the cloth back over the altar railing too energetically as she had just repaired the grommets that week. She explained it to him later. 😂

If you were wearing leather soled shoes, and we all were... and if you dragged your feet along while holding the paten, which we did.... and if the carpet was wool, as it was in our church,... you could build up quite a static charge. Bringing the paten to touch the Adam's Apple of the target classmate could produce quite the shocking experience at the moment of one's choosing...

I get ill watching people taking the body of Christ in to their filthy hands and then popping it into their mouth like a cracker. The sign of peace is number two and number three would be the Baptist-like charismatic Oran’s during the Lord’s Prayer. Stopping trying to save this disasterous illicit mass by talking about ad orientem or any other small move to return to pre-Vatican II.

Burn it all down now. It must be burned like the chaff.

Almost forgot the endless extraordinary ministers which seem to be rather ordinary to me. What so extraordinary about this ministry.

By the way I’ve spent years move around the globe and coming back to US from time to time over 33 years and so when did it go from genuflecting if standing before receiving the body of Christ to what I see now is a head bob or bow if you want to call it a bow.

When will priest teach from the pulpit and stop being the church of nice.