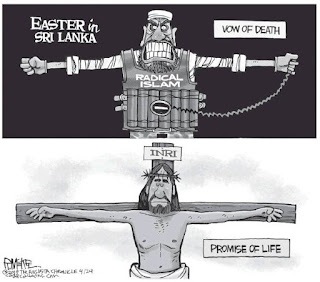 Shocked they printed the truth. The Dems will be outraged! According to Dem luminaries, the victims were just Easter "worshipers." No need to rile up their newest, favorite, "victim" group

Yeah, and according to The President, 138 MILLION were killed...

"Before Sunday, to be clear, the term Easter worshipper was considered straightforward enough that the AP used it in a headline about another recent church-based international tragedy: “Tourists, Easter Worshippers Lament Closure of Notre Dame.” Nevertheless, let me try to help: “Easter worshippers” describes Christians in church on Easter Sunday. The term is more descriptive than “Christians,” because it conveys the additional fact that the victims were actively celebrating Easter when they were killed. They are worshippers, and it is Easter. If it helps, try putting the emphasis on worshippers in the phrase: It’s Easter worshippers, not Easter-worshippers." Ruth Graham, Slate

AND he confused the Sri Lankan President and Prime Minister. Yeah, he's a genius...

well I could remind you of the following about YOUR genius:

3) You will save $2500 a year on Obamacare, if you like your doctor you can keep your doctor, etc.

The luminaries of the Abortion Party are averse to using the word "Christian" but when Muslims are attacked they have no hesitation to use that term. Your New York brain-trust, AOC, who can't shut her mouth about almost anything, strangely has said nothing about the Easter attack but managed to issue numerous messages when her beloved Muslims were. Nothing to see there, move along

If you go over to Instapundit you can read gems like this:

THAT’S DIFFERENT BECAUSE SHUT UP: Where’s the solidarity for Sri Lanka’s Christians? After Christchurch, world leaders stood with Muslims. Why aren’t they now standing with Christians?

It’s all about keeping their base riled up, and everyone else quiet.