DID YOU KNOW THAT THE CHURCH PRIOR TO VATICAN II IS THE SAME CHURCH AFTER VATICAN II? WELL, NOT EVERYONE KNOWS THAT, BUT IT IS NOW BEING MADE CLEAR! 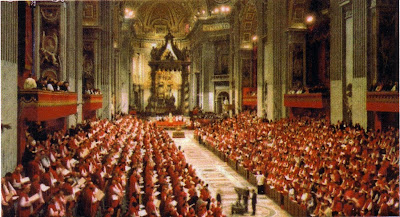 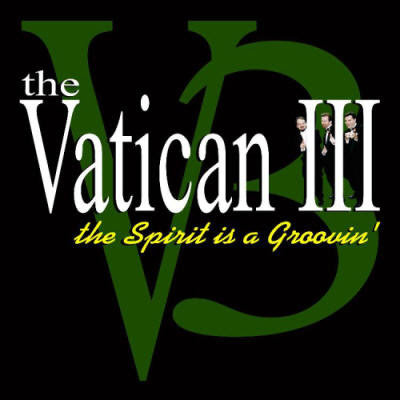 When I began major seminary in 1976, the Second Vatican Council had concluded about 12 years earlier. To this 22 year old that seem like a century had past in 1976. Today I realize that 12 years is not that long. We were taught in the seminary that Vatican II brought a great rupture in the trajectory of the Church. What preceded Vatican II was rigid, moldy, outdated, pagan, corrupted, and in need of great reform. After Vatican II the Church was purified of all of that except for a few diehards that wanted to keep the dusty old accretions of the pre-Vatican II Church. In 1976 the many theologians and many clergy and religious had moved away from what Vatican II actually taught and were embracing "the spirit of Vatican II" which was really the "pie in the sky" Vatican III that had never happened and will never happen. They were living in a fantasy land of their own making and in delusional euphoria bringing that delusion to the person in the pew who with pre-Vatican II innocence thought the clergy and the religious would not lead them astray. These good pre-Vatican II laity were wrong of course.

These were the main words of the powerful address delivered by Cardinal Piacenza, Prefect of the Congregation for the Clergy, to seminarians in the Archdiocese of Los Angeles on October 4th:

Yours will probably be the first generation that will correctly interpret the Second Vatican Council, not according to the "spirit" of the Council, which has brought so much disorientation to the Church, but according to what the Conciliar Event really said, in its texts to the Church and to the world.

There is no Vatican II different from the one that produced the texts we have in our possession today! It is in those texts that we find that will of God for his Church and it is to them that we must refer, accompanied by two thousand years of Tradition and Christian life.

There is only one Church of Christ, of which you are part, that goes from Our Lord to the Apostles, from the Blessed Virgin Mary to the Fathers and the Doctors of the Church, from the Middle Ages to the Renaissance, from Romanesque to Gothic to Baroque, and thus until our days, uninterruptedly, without any solution of continuity, ever!

And all that because the Church is the Body of Christ, it is the unity of His Person that is given unto us, her members!

You, most dear Seminarians, will be priests in the same Church of Saint Augustine, of Saint Ambrose, of Saint Thomas Aquinas, of Saint Charles Borromeo, of Saint John Mary Vianney, of Saint John Bosco, of Saint Pius X, up to Saint Padre Pio, Saint Josemaría Escrivá and Blessed John Paul II. You will be priests of the same Church that has been made up of so many holy Priests who, throughout the centuries, have rendered the face of Christ, Lord of the world, luminous, beautiful, radiant, and, therefore, easily recognizable.
Posted by Fr. Allan J. McDonald at Thursday, October 06, 2011

Father,
Even though I do not live near Macon I still look at this blog every day because I consider it an important source of information in our Diocese and because it often focuses on issues (especially regarding liturgy) about which I care a lot.

I doubt we will see the story you have just referenced in the "Southern Cross." Considering that it is probably the only Catholic publication that most Catholics in our Diocese read, its failure to carry such stories easily explains why most Catholics would not know that the pre-Conciliar and post-Conciliar Church are the same Church.

Father,
I have heard it said that the Church had not changed since the Council of Trent. That it was in a sort of defensive mode, protecting itself from the Protestants. Therefore the mission of Vatican II was to make up for the changes that should have been over those 400 years. The result was too much all at once thereby creating much confusion. Is that a correct summation? Also did other councils create such misunderstanding in their aftermath?

Quickness, the Council of Trent was a product of the Counter Reformation and helped to reform the Catholic Church of that period. Yes, the Church was in a siege mentality and for good reason. If the Church only had to contend with Martin Luther and his reformers, it would have been easier to address issues of legitmacy that he raised although eventually even he went a bit too far. But it was other reformers like the Calvinists and Puritans who stripped Catholic Churches of their altars, icons, statues and rid these churches of the sacraments. This really caused alarm and the fact that even earthly rulers like Henry VIII was making himself the head of the Church in England compounded all of this.
Vatican II acknowledged that we needed a more dialogical relationship with the Protestant communions rather than a state of war with them. Detante was needed. We also needed to be in more dialogue with the world, other religions and those who have no religion to promote the common good. But of course we have seen extremes in this since Vatican II where the dialogue has muted or undermined Catholic identity and the fact that we are the true Church with all other Churches (East) and protestant communions in more or less communion with the true Church depending on how Catholic or not they are.

"What preceded Vatican II was rigid, moldy, outdated, pagan, corrupted, and in need of great reform. After Vatican II the Church was purified of all of that except for a few diehards that wanted to keep the dusty old accretions of the pre-Vatican II Church. In 1976 the many theologians and many clergy and religious had moved away from what Vatican II actually taught and were embracing "the spirit of Vatican II" which was really the "pie in the sky" Vatican III . . ."

I remember this being told to my parents in the 1970s and hearing it again in the 1980s and early 90s. I do remember religious talking about Vatican III, which in the 1980s they blamed John Paul II for derailing -- something Traditonalists, in deriding John Paul have forgotten, that John Paul refused to listen to their calls for a Vatican III.

My "Yup" was in response to Joseph Johnson's observations.

If I had been a seminarian listening to that last paragraph in the post I would have been scared witless. And happy beyond description.

FWIW, Vatican II may yet happen, but it may be in a civil court ruling on the practise of our faith. Vigilance!

My Catholic memories from childhood are a litany of " Vatican II changed that". I developed a deep seated defensive reflex to any reference to V2 as a result until the quoter actually proves he knows what he's about. As for our "change" from a fortress mentality: I'd rather be roasting heretics.

Speaking of Vatican III (an error in my previous response) I am going back to the Faith Talk meeting tonight to continue learning about the new translation and the mass. My hypothesis is that this may simply become an eight week complaint session about the translation. If it does I'll just drop out and figure it out on my own. Or maybe go to the Latin Mass Parish next door and see what they have. I hope after the folks have had a little while to collect themselves they will dig in and enjoy it. I'll be cheerful. 8-D

LOL, Pin, alas I can not take credit for the "bumpersticker" as I already have a T-Shirt with that emblazoned on it, with a lovely husband and wife standing over a BBQ Grill. It has inspired some great conversations; "What's a Heretic?" asks my Methodist friend; "Uhh, that would be you!" LOL

rcg: If you have a Latin Mass parish next door, why oh why would you suffer through that tripe? Or is "next door" a 2 hour drive?

RCG, Why don't you stay and engage the whiners? I know that you are more than capable of dialoguing with them in such a way as to, perhaps, influence some of them positively toward the EF and the reform of the reform. You certainly will not be intimidated by them, and you can do this without intimidating them. I could not do it, however. Whatever rudimentary diplomatic skills I once had have been erased by constantly dealing with people like you mentioned and with your modern issue priest or preacher like Ignotus. I just really want to invite 'em out back...

OK. It was not so bad. There are a couple of issues that I am going to have to sort out for myself. For example there was a question about the translation source that was getting pretty tangled answers when it dawned on me that the hosts were not really prepared. But that just means that they need more training and education themselves. Some of it reminded me of discussions with Protestant literalists who are not aware of how the Bible came into being. Some of it is the lame guide that supports the attitude that the change is not well thought out, just change of words or only to make the mass more like Latin. For example the Gloria is portrayed as "babbling" with the litany of adoration that is added. Basically the text is bridging a mentality of the dynamic equivalence to the formal equivalence from the perspective of the former. No one had any idea what 'consubstantial' means or is all about. So we talked about the meaning but didn't delve into why the word was needed nor the relation to the manifestation of God in the Eucharist. The good news is that I think they are hungry for the meaning that is in the words and will eventually come to embrace it.