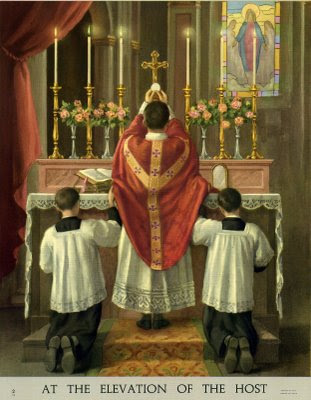 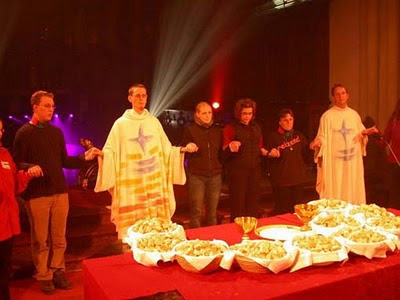 When I first started to celebrate the Extraordinary Form of the Mass, I was very uncomfortable praying so many of its parts in a very low voice. I felt like I was excluding those behind me and that the Mass was only my prayer and not those in attendance also.

Watch this short video which starts with the Hanc igitur and finishes with the consecration of the Precious Blood. Stay attuned to the silence:


I've grown accustomed to the silence and appreciate it more and more. Part of the rubrics as well as the silence was to engender great awe and reverence for what was being celebrated and re-presented in an "unbloodly" way, the Sacrifice of our Lord on the Cross and His death and resurrection.

Today with the Eucharistic prayer prayed aloud and facing the people, often the laity feel as though they are at a re-presentation of the Last Supper of Holy Thursday because the priest faces them and appears especially at the words of consecration to be speaking to them. When the priest is facing the altar "ad orientem" and praying silently, there is no doubt that this is precisely prayer offered to God by the Church (clergy and laity)with the priest representing the Church and Christ as he does in all the sacraments in order to bring about a "re-presentation" not of the Last Supper but of the Sacrifice of Good Friday.

The Banquet of the Last Supper (Lord's Supper) occurs following the "Lord, I am not worthy..." when the laity are to receive worthily the Precious Body and Blood of Christ in Holy Communion. The priest even in the EF Mass turns to the people at this time and speaks directly to them, "Behold the Lamb of God, behold Him who takes away the sins of the world. Blessed are those who are called to the Supper of the Lamb." There is no doubt that this is spoken to the all present and not to God as a prayer.

The OF Mass lends itself to a liturgical literalism and fundamentalism as it regards the manner in which it is celebrated and the people perceive it, including the priest. Progressive liturgical theologians have exacerbated this reality through the promotion of the Mass as a memorial of Holy Thursday rather than Good Friday which it is at its heart. The design of modern Catholic Churches and the reorientation of older ones has contributed to this false impression that has led to a loss of the sense of the sacred as well as the loss of orthodox dogmatic theology as it concerns the Mass. Combined with a "Low Christology" imposed upon the OF Mass, this has spelled disaster for the Church, Mass attendance and the sense of the sacred. If Jesus is not honored as the Second Person of the Most Blessed Trinity but only as the "son of Mary" as though one could divide His humanity from His divinity, then why in the world attend Mass in the first place?

Jesus is One Divine Being (Second Person of the Most Holy Trinity) with two natures, human and divine which cannot be divided. Therefore the Blessed Virgin Mary is the Mother of God! That has implications for the celebration of the Mass and the reverence due to God.
Posted by Fr. Allan J. McDonald at Saturday, October 01, 2011

As a former Congregationalist, I love the Biblical flavor of the traditional Roman Mass (the Letter to the Hebrews and Saint John's Apocalypse are great aids to full participation in the traditional rite). The ad orientem and silent Canon reveals the perfection of the Old Covenant high priest entering into the Holy of Holies, alone and in silence. Christ is now the High Priest, acting through his Earthly minister, taking his Precious Blood to the Father. The Temple curtain is then rent, so to speak, as the priest brings the Body and Blood of Christ to the edge of the "temple"--the Altar rail--where the congregation "reclines" on their knees "at table" to receive Our Lord's substantial Presence. There's no better Bible study in the West than the traditional Roman Mass.

amen Father Shelton preach it Brother !!!!! Why does it seem converts make the best Catholics?????

Do you mean that the people feel excluded and there is a temptation to elevate the priest inappropriately? If there is a temptation toward clericalism it might be overcome when the priest remembers he is at the front of a congregation he has led to God and is now speaking to the Almighty on their behalf. He speaks words that are primus intere peres among the great artifacts of civilization on our planet. Supplications and petitions from adults are naturally subdued and humble. Again the mass can serve several lessons. So sure the is a chance but that is the teaching role of the priest.

In my parish, I find that there is much too much focus on the communal meal, too little on the sacrifice. And there is far too little respect for the priest, who is routinely announced as our "presider", suggesting perhaps that anyone could preside.

I don't think the "clericalism" question should even be asked of the EF. The Mass is the Mass. If some think it is too "clerical," then what must we think of the OF, where all manner of liberties are taken by Priests and the clowns they recruit to provide sundry distractions and entertainments?

The OF is the only venue that, in my opinion, invites clericalism...as I define it. And, I'm with Meyer on this treating Priests like the butler. I have begun bowing to our Priests as they pass in the processional or enter a room...nothing too elaborate, just subtle enough for those who pay attention to notice. That is how it used to be done, and I think it needs to be encouraged again. Wouldn't you love to bow to Ignotus? Man, you know that would get his goat! I may attend Mass at his Church just so I can (and, yes, that is a bad reason to attend Mass). LOL!

Let me also add that it is very nice to have the quiet. It draws me in, like a whisper makes you lean forward to hear better, and I can pray as well. Sometimes I feel like the priest is afraid our minds will wander or we will feel the readings or seasonal celebration is boring. So, no, I don't feel it is too clerical, is worshipful.

At first I wondered why this post generated so few comments when I would have thought this issue to be central to the post-Vatican II liturgical concerns. But the more I think about it, the less likely I believe it is that the average Western (Latin) Catholic even knows about this difference between the two forms. I suspect most Catholics under the age of fifty truly believe the traditional Roman Mass to be exactly like the new form but in Latin.
I can tell you this: if the '62 missal were prayed in English and the '02 missal in Latin, most of the traditional Mass crowd would still prefer the former over the latter if they had no other choice.