OCTOBER IS PRO-LIFE MONTH, BUT EVERY MONTH REALLY IS! 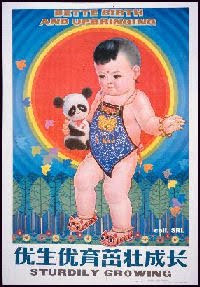 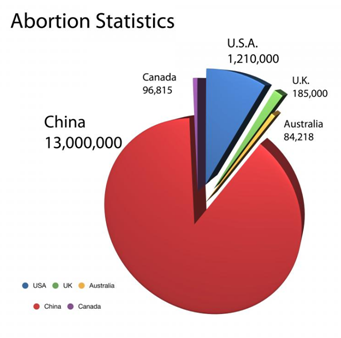 There was a rather "lighthearted" news story on CNN a couple of days ago. It was about a game show in China where women would choose a man to be their date, or something like that.

The CNN reporter went on to say rather glibly, that China's one-child policy had led many parents to abort their female children until they got a male child. They wanted males more than females. She said somewhat glibly again that since the one child policy came into effect that this policy had reduced China's potential population today to about three-hundred million less people, i.e. fewer girls mostly!

But the point of the story was not shock and horror at such a ghastly statistic and the power of the state to dictate to parents how many children they will have and how this had led to the abortion of about 300 million mostly girl babies, no the story was about a game show and that women in China today have a glut of men to choose from, more men than they can handle. That was suppose to be amusing!

What is really sad is the blind spot that liberal America and liberal world leaders have to very grave child abuse in the womb that is state regulated and protected. Could you imagine a lighthearted news story on any other form of child abuse and a game show that was based upon it?
Posted by Fr. Allan J. McDonald at Wednesday, October 05, 2011

And, yet, these same libs will whine and moan and stomp and snort about the State executing some heinous criminal who richly deserves it. What it really amounts to is a war against marriage and the family. Chesterton points out that the "Fiend hates the family" because it is the basis for the Faith, the Church, and moral values. All this stuff is no accident...

Oh, and why are not the women's groups, usually so incessantly vocal, hissing and spitting in International outrage over this? Any guesses...two...three...

Another social side effect is that it's already documented that young Chines men are turning to greater social violence, probably because they have no women to serve as a stabilizing influence. There will be a whole generation--or two, or three--with grossly mismatched sex ratios. That's going to be a powder keg.

No takers yet? Ok, here is the answer to why liberal womens' groups are not out in the streets having hot flashes about China...they are afraid that any outrage or protest over this might be interpreted as an anti-abortion statement or used by pro-life groups as leverage against them. These women cannot speak up because their sole purpose in life (other than use as scarecrows) is to insure that as many abortions as possible are performed every year. They are the epitomy of hypocrisy and prevarication.

Anonymous 4 (are you really the famous singing group?). Women re NEVER a stabilising influence on young men. If the ratio were reversed they would simply fight over harems.

The issue is that the societies are not valuing people as humans, but as elements of a system. If we don't need more production elements we abort them. If an element is no longer productive on the balance sheet versus its costs, we remind the unit that it has s right or even duty to die.

Women are not given a choice between being traditional mother and w a career, but are told that they are less valuable without the career.

Society has a distorted view of poverty that creates unfettered desire for material objects and disrespect for frugality and the joy of a simple life.

The irony is, of course, that society has an endless appetite for the human production units it is trying to manage yet no self control over their consumption. This system is headed for a crash as surely, and for exactly the same reasons, as our economy.

First, I agree with almost everything you say . . . but your initial statement is unsupportable. My wife is a stabilizing influence on me in many ways, ergo your statement is wrong. And as for Chinese males, there is already sociological discussion about increased crime and psychological difficulties as a result of the gender gap.

I'm not taking the current liberal American approach that without sex you'll go crazy or turn into a child molester or something (which is one charge leveled by the secular anti-Catholic culture against the idea of clerical celibacy). Nevertheless, when you sharply reduce or outright deny a standard familial relationship to tens of millions of males of the same age, I would imagine that there are going to be some measurable and ugly group dynamics.

The ability to live a stable celibate life, for one's whole life, is a grace given to a relatively few people, I would think, and the freedom to choose it voluntarily probably plays a major role in that grace in most instances. That obviously isn't what's happened in China.

Finally--glad to see there's another A4 fan on the board. :-) No, I'm not affiliated; I just chose it to distinguish me from all the other anonymouses. :-)