EVEN THE HETERODOX ARE TURNING AGAINST POPE FRANCIS! UNDER POPE FRANCIS PART OF POPE BENEDICT'S PROPHECY WILL BE FULFILLED, THE CHURCH WILL BE SMALLER BUT WILL IT BE MORE FAITHFUL? YES, BUT ONLY AS AN NGO WHICH ANY RELIGIOUS OR SECULAR ORGANIZATION CAN ACCOMPLISH, EVEN ATHIESTS CAN BE GENEROUS WITH THE POOR AND CARE FOR THEIR NEEDS

"One of the biggest unreported stories in the Church is liberal Catholics’ fading enthusiasm for this pontificate. His ‘reform’ of pastoral attitudes towards marginalised Catholics is a mess: the divorced-and-remarried don’t know where they stand, while gay Catholic men have just learned that Francis is upholding the ban on them becoming priests, even if they’re celibate."--Damian Thompson of the UK's Spectator 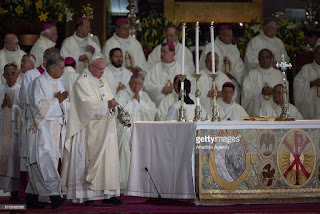 We see in this article from Religion News Service that the leftist heterodox are turning on Pope Franics as the rightist orthodox have been doing and since day one:

Another misleading headline. The media isn't turning against Francis. They aren't even reporting on this story. And if the story does begin to gain traction Francis will send one of his henchmen to "clarify" that the document was published without his approval. Francis is actively trying to destroy the Faith, and the media knows this and will NEVER turn on him.

The Holy Father on Friday suggested that priests who wear certain kinds of clerical clothing are transvestites. Based solely on appearances, the Holy Father called one such priest "a rigid and worldly one". At any rate, if Pope Francis succeeds in ridding the priesthood of effeminate men, that would certainly be a good thing. Are there also masculine "Village People" type homosexuals in the priesthood? I've only seen indications of the other type.

Of course, I do hope such troubled fellows do find a more appropriate place for themselves elsewhere.

People who twisted Pope Francis's "who am I to judge him" comment have only themselves to blame for their misreading of his comments in regard to homosexuality.

Pope Francis made it clear in 2013 A.D. that he upheld the Church's teachings that pertained to homosexuality.

1. He made it clear that we are to treat homosexuals charitably. (That is Catholicism 101.)

2. He made it clear that homosexuals of goodwill who seek Jesus Christ, confess their sins, and reform their lives enter into good standing with God. (That is Catholicism 101.)

3. He referenced the CCC during his remarks in question. (Catholicism 101.)

Pope Francis reiterated the Church's teachings in regard to homosexuality. Nobody has any right to twist the Pope's comments in question into something that he didn't say.

During a Wednesday General Audience, Pope Francis praised Catholics who worked to pass laws that to outlaw homosexual unions as well as prohibit homosexuals from adopting children.

He also has condemned "powerful forces" who have attempted to promote the legitimacy of homosexual unions.

A honest person who has read Pope Francis's statements in question would not be surprised that the Holy Father has time and again offered orthodox teaching in regard to homosexuality.

My friends there is something very very wrong with this pope, my goodness somebody in the Vatican needs to interveen and fast!