IF TRUE, THIS IS A SAD TESTIMONY INDEED! 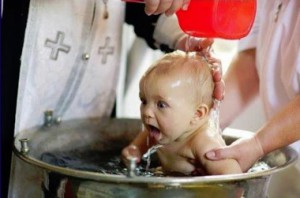 I have run into many irregular situations as a priest,but if what Fr. Z writes in his blog today actually is true, this takes the cake. Fr. Z says this came from a priest. I hope it is fictional, but who knows today?

I recently encountered a situation in ministry that previously was the stuff of theory or anecdote only.

A parent has given his still unbaptized toddler the middle name “Lucifer.” The parent claims that even though Lucifer fell, he was still “God’s favorite” angel and that the name was chosen for that and no sinister occult reason.

Based on a previous priest’s alleged refusal to approve the child’s baptism the parent had the impression he must legally change the middle name in order to baptize (something he is not willing to do). I told the parent that I would consider baptism but (a) I would not baptize using the name Lucifer; (b) that he would need to choose a saint’s name in place of Lucifer; and (c) I can only strongly encourage him to cease using the middle name with the child if he is seriously making a decision for Christ and Christ’s reign on behalf of his child.


I do think that the pastoral solution this priest is offering is sound, non clerical and God knows, this child needs Holy Baptism and all the graces he will receive to cope with a father that would give his son a fallen angel's name.

What do you think about baptizing this child?
Posted by Fr. Allan J. McDonald at Tuesday, December 13, 2016

This isn't hard, just shocking. The father is either a moron or a liar. Well, maybe both.

Everything you say about helping the child is true.

There are cutures that use some strange names: there was a really good hockey player for the blackhawks named 'Satan'. But this dad is just a jerk.

I was present at a parish Confirmation Mass where a young woman was presented to the bishop, "Bishop, this is Lucifer."

The bishop, stunned, replied,"What?" and then was told again, "Lucifer."

He said, "You're not taking that name. Go over there and choose another." She came back as the line ended. "Bishop, this is Mary." She was confirmed.

Several years later, I related that story to another bishop, who asserted he would have confirmed the candidate with the name Lucifer; he explained that it means "Light-Bringer, and is an ancient title for Christ."

Of course, one might wonder if Light-Bringer was intended in either of these cases....

Today is the Memorial of Lucy, Virgin and Martyr. Pray for us!

This is the sort of thing that calls for the unexpected return of the Spanish Inquisition.

There is a St Lucifer who was a Bishop somewhere.....

I think I might ask them to recite the creed, check their familiarity with the catechism, inquire into their parish life, and try to determine if they were into the occult, practicing wicians, or people who don't like Catholics. I might be superstitious,but something just doesn't sound right.

Oh Holy Ghost save our Holy Roman Church and return the TLM to all of our altars beginning in Rome!

I baptised a "John Wesley Xxxxx" once. Gave me a moment's pause...

I once had a client named Cheezette, but she wasn't of the proper... shall we say... ethnicity to be a Georgia "cracker."

Another client's name was pronounced shi-THAY-uhd.

Why anyone in his/her right mind would do that to a child is beyond me.