WHICH WAY IS THE BEST WAY TO REFORM WHAT NEEDS TO BE REFORMED? SUGAR OR VINEGAR

Pope Francis arrives for an audience to exchange Christmas greetings with members of the Roman Curia in Clementine Hall of the Apostolic Palace at the Vatican Dec. 22. (Credit: CNS/Paul Haring.)
Most who work in the Vatican do so for low pay, no fanfare and at considerable personal sacrifice, and once in a while, they’d like to hear something encouraging from the boss about the value of their labor.

Of course, Francis was elected on a reform mandate, and he’s carrying out a project that enjoys the strong support of many of his cardinals and other bishops from around the world. On the other hand, he also faces the challenge of ensuring that when the reform is finally over, the people left standing have the confidence and enthusiasm to carry it out.--John Allen of Crux 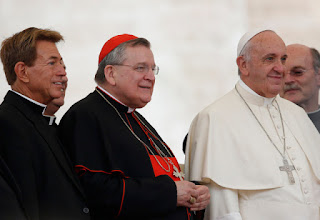 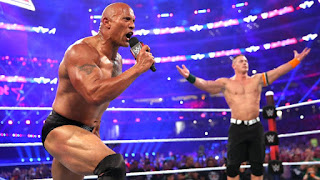 John Allen makes good comments about the Vatican Curia which indeed needs reform. Remember when Pope Francis sat down with Pope Benedict at Benedict's compound and on the coffee table were several notebooks piled high which were the results of an internal investigation of the problems in the Vatican. This was after Pope Benedict had been humiliated by someone leaking his private documents--Vatileaks.

John Allen knows that the good people in the Curia are demoralized by Pope Francis crass style of reform which uses vinegar and insults rather than sugar and spice and everything nice 👍!

It looks like Cardinal Fisher, I mean Cardinal Burke was their for the address. The tension in that room had to be intense.

I WOULD SUGGEST TO USE HONEY. HOWEVER, IT TAKES HELP OF THE HOLY SPIRIT WHEN THAT APPROACH ENDS AND VINEGAR SRART. WE CAN LEARN FROM GOD THE FATHER. IS IT NOT GOD'S MERCY AND PATIENCE WITH US SUGAR AND THE THE FINAL JUDGMENT HONEY AND VINEGAR? JUSTICE MUST BE FOR THE VICTIMS OTHERWISE GOD WOULD NOT BE GOOD BUT EVIL.

I am sorry to have to say this but were he not the Holy Father I would be calling him names that I reserve to certain incompetent and undesirable politicians. He is similarly humiliating the faithful Catholics in China, giving the impression that politics is more important than preserving and honoring the Faith.

I still don't understand why it's so complicated for him. He needs a poster board and a marker, which he can used to create a diagram of exactly which ministries he wishes to keep, and how many personnel each should have. Then he should quietly hire and fire whomever he wishes. If that's what he was elected to do, then he should just do his job, and stop being so bitchy about it. To paraphrase him, "I didn't think a woman could become pope"!

Thanks to big, bad Pope Francis, only now has the Curia experienced demoralization? Oh, I guess that I didn't read hundreds of stories during the Pontificates of Saint John Paul II and Benedict XVI about the manner in which said Popes had demoralized the Curia.

Except...I read those stories. I recall vividly as to how Curial officials insisted that Popes Saint John Paul II and Benedict XVI had demoralized the Curia.

It is unbelievable to me that His Holiness Pope Francis has been attacked for his having "demoralized" (supposedly) the Curia when, as John Allen noted, Pope Francis was tasked by the Cardinals to clean up the terrible situation that existed within the Curia.

Have we forgotten about the fact that, for example, Pope Benedict XVI, a holy man, lacked, unfortunately, managerial skills. In turn, that only added to the terrible situation that he had inherited from Pope Saint John Paul II?

The following is a typical story from 2013 A.D. about the demoralized Curia that Pope Francis inherited...a Curia demoralized long before Cardinal Bergoglio was elected Pope:

"What’s more, many Curialists are demoralized because the past two popes largely ignored them.

"From the beginning of his pontificate, John Paul II made it clear that he would not be managed by the Curia. One of his first acts was to visit a sick friend in a Roman hospital. As the papal party was leaving, he talked at length with one of the nurses.

"Soon Curialists would learn of John Paul’s decisions when he announced them from his study window at the Angelus. To a large extent, he left the Curia to its own devices while he acted on the world stage. And so the Curia did as it pleased during his long decline from Parkinson’s disease.

"Before he was elected pope, Joseph Ratzinger served in the Curia for a quarter of a century, but was never of it. He ran his own show, as if the Congregation for the Doctrine of the Faith was the “Supreme Congregation,” as in the past. He was elected pope in part because some cardinals wanted an insider to clean up the Curia. To some extent he tried.

"But for Benedict the church is the search for beauty and truth. He never saw the relevance of the Vatican diplomatic corps, with its inevitable compromises.

"He refused to grant Vatican ambassadors (nuncios) their traditional audiences when they visited Rome. He further upset them by appointing his collaborator Cardinal Tarcisio Bertone as secretary of state, rather than a nuncio. Bertone lacked diplomatic experience—and English.

"Bertone had been promoted beyond his competence, yet he threw his weight around as if Benedict had decided to concentrate on intellectual issues while leaving Bertone a free hand with administrative matters. Many Curialists were disgruntled—Bertone’s appointment was more proof that popes no longer deemed them important.

"Benedict XVI spent his pontificate campaigning against relativism, but then he relativized the papacy by stepping down because he lacked the energy to reform the Curia. He left the task to his successor."

Francis was elected on a "reform mandate"?

1) A mandate usually reflects an idea that everyone agrees upon. Do we know for fact that any idea of "reform" was prevalent among the cardinal electors?

2) The cat is out of the bag on the "St. Gallen Mafia". We know who these cardinal are and we know what kind of Church they visualize for the future--and it's not the kind of Church that makes saints. An election manipulated by a consortium of angry old men can hardly be called a mandate and it sure as heck isn't a "reform".

Pope Benedict was a respite. Pope Francis is a relapse. He is the last gasp of the liberal choke-hold the geriatric hippies have on the Church. These people don't let go and they don't retire. They hang on to the bitter end, but that end is coming, nonetheless.

I wonder, aloud, if Pope Francis considers his personal mission to preach to the clergy and religious? If all that he has said is reviewed strictly as a locker-room talk to that group there is little to be upset about. Even in that scenario he should, at least, shut the door so the public can't be confused by what they see and hear.

Victor, having said, "I am sorry to have to say this but were he not the Holy Father I would be calling him names that I reserve to certain incompetent and undesirable politicians" you are already guilty of the sin, despite your not having used the words themselves.

Commonweal, a lefty-wing rag, is not a credible source.

Pope Pius XII would be appalled by Pope Francis' approach.

Blah blah blah. Does Francis ever open his mouth without complaining about something or somebody. And let's not forget JUDGING and condemning everyone's intentions. It's like ok Holy Father what's bothering you today. What a miserable old man. He really seems like a nasty, miserable, cracky old man who has a problem with everyone and everything on the face of the earth.

TJM, feel free to believe as you wish. The fact is that Commonweal reported that which right-wing rags had reported...the Curia was in shambles long before Pope Francis arrived on the scene.

The Commonweal report corresponds to right-wing claims about the awful state of the Curia during the Pontificates of Popes Saint John Paul II and Benedict XVI.

Here is a right-wing report:

You can read about the "Parallel Curia" that emerged during Pope Saint John Paul II's Pontificate.

-- Benedict XVI is by himself

-- As the Pope prepares to name 22 new cardinals, leaked documents show the Catholic Church is struggling with in-fighting, envy, money laundering and other corruption.

Perhaps you're right, but it is still hard to understand what he's talking about. Where are all these morally rigid priests suffering from childhood traumas who refuse to minister to sinners? Plenty of priests have plenty of faults, but the faults he speaks of seem to be rather rare.

I have as much for Commonweal as I do the New York Slimes aka Hell's Bible. Why don't you go over to Father Z's blog and spout off. I know why you don't, you'd get your head handed to you