FOR MEMBERS OF THE CLERGY, BE THEY POPES, BISHOPS, PRIESTS, TRYING TO ACT JUST LIKE ANYONE ELSE IS A MIXED BLESSING 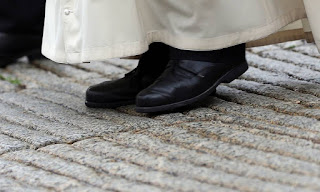 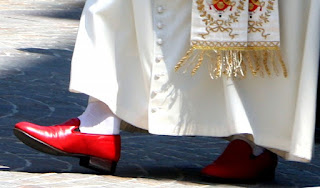 Pope Francis stopped by a Roman pharmacy to pick up the "shoes of the fisherman" his black orthopedic shoes (clodhoppers) that are custom made and I am sure much more expensive than the red ones Pope Benedict was criticized for wearing, which too, I am sure, brought Pope Benedict foot relief.

But the fact that Pope Francis does stuff that we all do is what clergy have been trying to show the laity for years since Vatican II, that we are human just like you. What could go wrong with that? 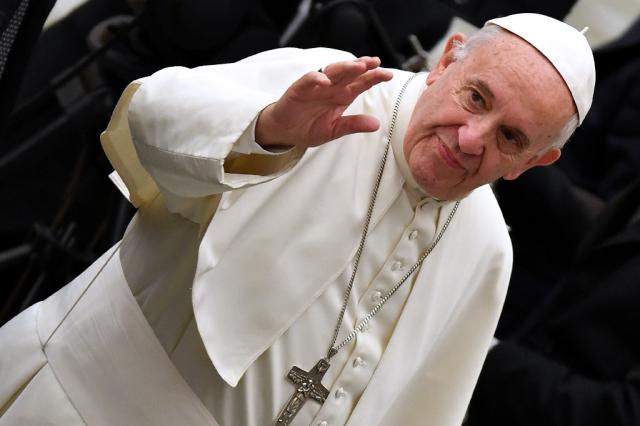 Pope Francis was the toast of social media on Wednesday after successfully completing his latest groundbreaking mission: popping out of the Vatican to buy himself some new footwear. To the barely containable delight of his many fans in cyberspace, the 80-year-old pontiff visited a pharmacy near the Holy See on Tuesday to pick up a pair of the orthopaedic shoes he wears to offset the pain caused by chronic sciatica. The visit was filmed and snapped on smartphones by a handful of customers who were in the shop at the time and later uploaded images to social media.
Posted by Fr. Allan J. McDonald at Wednesday, December 21, 2016

being a publicity hound is not an attractive character trait. I also remember with pain that following Vatican II, gorgeous vestments were thrown out by my pastor so he could buy lots of nice burlap chasubles so he would appear "humble." That was my first encounter with clerical left-wing loonism and hypocrisy

From the start I knew he was going to be the world's "low information" pope. Taking the bus to work, cooking his own food, "humble" small cars (in a huge convoy of armored vehicles cocooned within a small army of undercover security agents) all caters to the "poor and 'umble'" look that captures the hearts of the Low Information population.

Nothing wrong with it. It does produce good will, if only on a superficial level.

But we need to remember that this good will is nevertheless, shallow. Easy come, easy go.

High information people on the other hand tend to earn their followers trust and then don't shed them when the going gets rough.

The power of the Papacy is such that the most mundane actions of a Pope receive massive international news coverage.

Therefore, imagine the news coverage and discussion in the Church in regard to liturgy that would be unleashed should a Pope offer publicly the TLM.