A COUPLE OF BLASTS FROM THE PAST FORETELLING THE FUTURE: TODAY 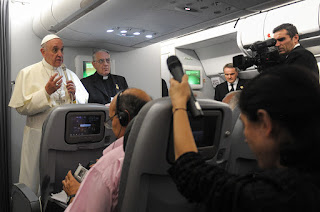 Your Eminence, what will you say to Benedict XVI when, following the end of the conclave, you go meet him?
"So many things. The first one is a recommendation. I will suggest to him to not let himself be used by anybody. The risk is too great that the government of the Church receive his influence. He made a specific choice, that supposed a step back. He, therefore, ought to be discreet. Avoid mingling with the problems related to the government of the Church. Then I will speak amicably with him of what pleases us both, theology."--Cardinal Walter Kasper, 2013

This is from Father Joseph Ratzinger in the 1960's: “From the crisis of today the Church of tomorrow will emerge — a Church that has lost much,” he writes. “She will become small and will have to start afresh more or less from the beginning… And so it seems certain to me that the Church is facing very hard times.
“The real crisis has scarcely begun.”

1. Remarks by Martin Mosebach, published in Der Spiegel, the most influential magazine in Germany, on May 23 (today):
Der Spiegel interviews Mosebach: “What’s concerning about Francis is this atmosphere of an Entirely New Church”
“This Pope is creating a certain atmosphere”
[“Whatever breaks from continuity is not good for the Church”]
By Romain Leick and Walter Mayr
Der Spiegel
May 23, 2015
Author Martin Mosebach thinks it dangerous that Pope Francis serves emotions above all else and is making his mark through his appearances at the cost of the Church.

Rorate Caeli has commented about the latest interview given by Francis to a Belgium newspaper "in which he speaks of sexual perversions of which most Catholics had not even heard". The state that "The persistent anger, rancor, vituperation, use of uncouth words (which is known to be increasingly frequent in private)".

I have to agree with Rorate Caeli and it has seemed to me that things are getting increasingly worse. We are all getting an education from Francis and not in the best way. His latest comments (which he has already stated in 2013) made me feel physically ill and I think something will have to be done sooner rather than later. "Houston, we have a problem" is no joke ...

His Holiness used this term to condemn a very serious problem in the media, that of false news and also of maligning people. It was in the context of calling this false news, that could be true, when it dredges up negative truths about an individual, long forgiven and forgotten, happening 20 to 50 years ago and feeds it to the consuming public, like feeding them "s--t" to use a term His Holiness did not use but the more technical term.

Those who are crying fowl would also take offense if the pope used the term sodomy or sodomite or some slang for it which in my mind, when I hear the word conjures images that I would prefer not to think about.

But what the pope says about the media is true, just watch tv and you will know the s--t that people are eating!

I am patiently waiting out this papacy, just like I waited out Obama's regime. Words have consequences, and His Holiness' sloppy and imprecise language is not helpful.

I wonder if Pope Francis has ever experienced joy. There are so many of these curmudgeon priests in the Church today, priests who grumble against everything fun like incense, bells, chants, cassocks, processions, devotions, etc. It's like going to a birthday party and berating the family for providing balloons and cake, and then telling everyone that the family is rigid and possibly hiding some psychosis! Maybe Cardinal Burke just needs to give Pope Francis a hug and tell him that God loves him, and invite him to let go of his resentments and prejudices.

Dialogue at 9:47 - I think your hug comment is closer to the truth than many think. Pope Feancis sounds very lonely.

I don't believe that His Holiness Pope Francis is more "polarizing" than this or that Pope. As I noted the other day here, right-wingers and left-wingers attacked Popes just as viciously as Pope Francis is attacked today. The difference is that years ago, for the most part, attacks against Popes were broadcast via print — usually weekly and/or monthly newspapers, magazines, and newsletters.

But it's all nonsense as the venom spewed at a Pope is meaningless to the vast majority of Catholics as it's a given that they will look favorably upon their Pope.

Your political evaluations are puzzling to me. Surely you don't think the Sacred Hierarchy is some sort of parliament.

I imagine Francis as what it would have been like to have Martin Luther as Pope...to quote Luther, "I am the turd and the world is the waiting anus." Since we are doing scat talk and all...

"His Holiness used this term to condemn a very serious problem . . . that . . . of maligning people."

The irony here is, well, rather striking, is it not?

I was hoping that anus analysis died with Freud.

They declared that Pope Saint John Paul II and "Roman authorities" had turned "their backs on their (the Pope's) predecessors" and had broken "with the Catholic Church."

Pope Saint John Paul II and Roman authorities had placed "themselves at the service of the destroyers of Christianity and of the universal Kingdom of Our Lord Jesus Christ," according to Archbishop Lefebvre and Bishop de Castro Mayer.

Various right-wingers accused Pope Saint John XIII and Blessed Paul VI of heresy. What the "serious" right-wing spews today at Pope Francis is simply the same old garbage that the right-wing spewed decades ago at our Popes — two of whom are recognized by the True Church as Saints.

It just seems more overwhelming today as via the Internet, the right-wing attacks Pope Francis second-by-second, and day-after-day, which they were unable to do years ago.

Again, based upon the right-wing's same old vicious attacks from decades ago, when they labeled our Popes "communists," "heretics," and even "dirty-minded," there isn't any reason to believe that Pope Francis is more "polarizing" than his predecessors.

This is getting tedious. But if you want to play that game, the left-wingers have been attacking the Holy See non-stop for decades, for being orthodox. Look no further than the National "Catholic" Reporter, Commonweal, America, and the Tablet. You really live in an alternate world of reality.

I am anxiously waiting your left-wing refutation!

No, I don't think we should cut Francis any slack whatsoever. Using such language is bringing the papacy down to the level of the gutter and, as he has that term at least twice before, unfortunately, I am beginning to wonder if he has a sexual hang up and this type of stuff is getting on his mind. I think his confessor would do well to counsel him from using such base language.