WILL THE HOLY FATHER "PRESIDE" OR "CELEBRATE" THE EXTRAORIDNAY FORM OF THE MASS WHEN ADHERANTS MAKE A PILGRIMAGE TO ROME IN NOVEMBER? THE SUSPENSE MOUNTS! 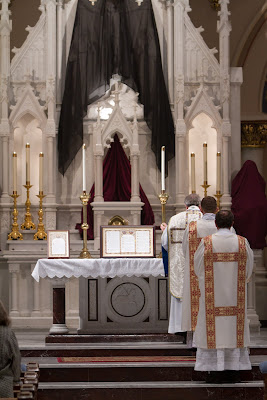 My comments first: As far as anyone knows, Pope Benedict has not celebrated Mass in the Extraordinary Form since becoming the Bishop of Rome, not even privately.

But with a large group of adherents to the 1962 missal making a pilgrimage to Rome for the Year of Faith, will the Holy Father speak to them and will His Holiness offer Mass for them in the Extraordinary Form?

Because papal Masses are so complicated in the Extraordinary Form, may yes, but I suspect maybe no he won't offer Mass in this form.

However, nothing is stopping His Holiness from presiding at such a Mass. Presiding in this sense has a very canonical definition. When a bishop, including the Bishop of Rome presides at a Mass, that means He is not the celebrant and he doesn't wear liturgical garb, such as the chasuble and stole. Rather, he dresses in choir dress, which for the Holy Father, I suspect, could also include the cope, but I'm not sure and simply participate in the Liturgy in this way. I believe he did so at an Eastern Orthodox Divine Liturgy when visiting Turkey, if I am not mistaken.

At any rate, for the Holy Father to "preside" at an EF Mass would be a wonderful gesture, but for His Holiness to celebrate it would be out of this world!

Year of Faith: The first meeting of faithful in favour of the rules of the “Summorum Pontificum” has been called for 3 November and will take place in the Vatican. The faithful are hoping for a speech from the Pope

The faithful who follow the traditional Latin rite of Mass thanks to the Summorum Pontificum, the Apostolic Letter issued “motu proprio” by Benedict XVI IN 2007, will meet in Rome for a pilgrimage linked to the Year of Faith. The pilgrimage will conclude with a Mass celebration in St. Peter’s Basilica. The news was announced in the last few hours.

Organisers have explained that the event is intended as “a big mobilization initiative in Rome, leading all faithful who are devoted to the Holy Liturgy and the Holy Father, the Pope, on a pilgrimage of prayer. Now more than ever, with all the attacks on his sacred person, the Pope is in need of our unanimous manifestation of affection, obedience and charitable support. Let the organising begin.”

This will not the first time the Latin Rite Mass of 1962 - according to the last of the Missals that precede the post-conciliar liturgical reform - celebrated in St. Peter’s. German cardinal Walter Brandmüller presided over a traditional rite mass in St. Peter’s Basilica on 17 March 2011, at the end of a convention on the Summorum Pontificum issued “motu proprio” in Rome.

Organisers said nothing about a potential meeting with the Pope, although the Coetus internationalis pro Summorum Pontificum is hoping that Benedict XVI will be present and greet pilgrims who will come to Rome from all across the world.

In September 2010, three years after the implementation of the “motu proprio”, the Paix Liturgique group published some figures on the situation in a newsletter. The quantitative and qualitative study concerned thirty countries where Catholicism has the strongest presence. It looked into the number of traditional masses on offer, their frequency and the times held, to assess for example whether these times were convenient for families. The situation was monitored in Spain, Portugal, Ireland, Switzerland, the Czech Republic, Germany, Italy, the United Kingdom, Poland, France, the Netherlands, Hungary, Austria, Canada, the United States, Mexico, Colombia, Chile, Brazil, Argentina, Australia, India, the Philippines, New Zealand, South Africa, Gabon and Nigeria.

An interesting comparison can be drawn between the masses celebrated by the Society of St. Pius X, not taken into account in the first figure which did take into consideration masses celebrated according to Benedict XVI’s “motu proprio”. Lefebvrian groups organise a total of 690 masses and one in two of these is celebrated according to Benedict XVI’s “motu proprio” and in full communion with the Roman Catholic Church. Despite the difficulties and the resistance shown, a growing number of people are slowly becoming familiar with the Traditional Rite Mass.

Thank you, Father, for instructing in the difference between celebrating and presiding. At the parish level, the (mis)use of the word preside has become one of my major peeves.

I find it most commonly used to suggest in some way that any of us might preside. Of course, that is utter nonsense. But the word is used very commonly to diminish the role of priest, and I reject it, categorically.

I am happy to learn that is has a valid use on connection with the liturgy, even though I have never heard it used in that way before.

Actually, I think the term "presiding" is unfamiliar in the EF context. The relevant concept is likely that of a "Solemn Mass in the Presence of a Greater Prelate". In this case the "greater prelate" is said to assist, though he does so at the throne. Fortescue describes two forms:

1. In the Presence of the Bishop in Cope and Mitre
The first case is when the prelate assists with more solemnity, wearing cope and mitre. . . .

2. When the Bishop Assists in Cappa Magna
On less solemn occasions the bishop may assist at solemn Mass wearing not cope and mitre, but cappa magna (and rochet). . . .

In such a Mass, the prelate at the throne reads from the missal at four times during the Mass--the introit, the gradual, the offertory antiphon, and the communion antiphon. Only the celebrant and his ministers approach the altar during the Mass. For instance, after the celebrant at the altar intones the Gloria, the choir continues it as usual, while the prelate with his ministers at the throne say it from memory (without missal). All the details are spelled out in Chapter XVI of the current 15th edition, and presumably a Missa coram pappa would proceed similarly.

I would expect that the next step in the progression of SP things, EF Masses having now been celebrated by cardinals in St. Peter's, would be a Missa coram pappa, with an EF Mass celebrated by the pope himself only thereafter. Also, one does see bishops assisting less formally at EF Masses nowadays, in choir dress (surplice and cassock), and perhaps such an adaptation might be made for the pope.

I think the figures she cites would be different today, but the time of day remains a problem. I’m fortunate to have inherited a parish Mass schedule a year ago allowing me to add an EF Mass at 11am each Sunday, but I would have feared replacing an existing Mass at that time. And I have heard no one address the bination/trination problem authoritatively (e.g. if the bishop assigns you three Sundays Masses, may you still offer a fourth EF Mass?).
It would be great if the Holy Father attended or celebrated or whatever this gathering, but I’m more interested in concrete answers to canonical questions and challenges.

Father, those are very interesting statistics.

Are there any statistics for the United States specifically, and even more specifically for the Diocese of Savannah?

Also, is it correct, as I believe some comments in earlier posts have suggested, that the TLM is offered nowhere in the Archdiocese of Atlanta?

In the Archdiocese of Atlanta the FSSP has a parish in Mableton, St Francis de Sales. Two masses every day. Confessions before every mass. Holy hour every Friday. Divine Office chanted several times every day. Sunday low mass 9:00 am, high mass 11:30 am.

However, anon2, as far as I know, the FSSP parish in Mableton is the only one of the 100 parishes in the Atlanta Archdiocese to offer Latin.

The only other Latin is at the SSPX chapel in Roswell, about which Fr. M has written.

Anon2, I think you might have been hearing reference to there being no diocesan TLMs in the Archdiocese of Atlanta. People speculate that oftentimes bishops will allow the FSSP into a diocese, put them in a bad location, and then use the FSSP's presence in the diocese as an excuse to have no other TLMs.

The former Archbishop of Atlanta was a friend of Tradition: I believe he celebrated Confirmation in the Traditional Rite at the FSSP parish in Mableton on several occasions.

I'll note that, in addition to the FSSP parish in Mableton, there is also an SSPX Chapel in Roswell.

A bit odd the FSSP and SSPX chose to be so close to each other - it is a shame neither chose the south side of town closer to us here in Macon!

As a practical matter, I doubt it, unless he has had time to devote to preparing for it. Even with loads of mass cards and master of ceremonies, it is a lot, even for a priest who celebrated this way before V-II!

MAybe if he uses an iPad for his prayer cards and texts from the MoC, then it could be interesting!!

Please, find the link of the petition to the Holy Father Celebrate a TLM.
http://www.change.org/petitions/to-the-holy-father-pope-benedict-xvi-petition-to-celebrate-a-public-mass-according-with-the-1962-missal

Please, find the link to the Petition to the Holy Father celebrate a TLM.

Hmmm. We discover one of the readers from Italy....