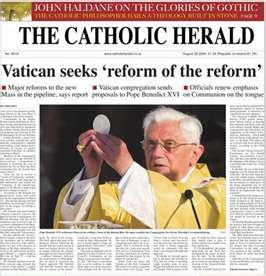 Msgr Andrew Wadsworth with ICEL comments that, "the Liturgy is something we receive from the Church not something we make for ourselves. This principle does not in any way limit the legitimate diversity of style which the Church permits in relation to liturgical music but rather explains the norms that govern it."

But another person comments on Msgr. Wadsworth by writing, that the "GIRM lists lots of things as mandates, priorities, and options. “Options” is not a dirty word. It enables the parish priest, in consultation with his parishioners, to serve the highest needs of the faith community. Even as GIRM lists priorities, the paramount concern is the “sanctification of the faithful,” not the absolute letter of the liturgy."

And yet a third person writes a comment, "Who – if not “we” – is the Church? We receive the official rites from the hierarchy, but (to paraphrase the maxim about the Eucharist) we, the Church, then make the liturgy, while simultaneously the liturgy makes us. If one thinks that the Church is something/somebody other than all those baptized in water and the Spirit, who are united in that Spirit as the Body of Christ to offer the sacrifice of praise again and again to the Father, then “the liturgy is something we receive from the Church” is an impossibility."

MY COMMENTS: It seems to me that the brilliant Msgr. Andrew Wadsworth understands that the Liturgy is primarily a "vertical" endeavor, where Christ the Head with His members the baptized, offer the one sacrifice to the Father. The ordained priest receives the gifts from the laity, offers them to God, God consecrates them as these become the Body, Blood, Soul and Divinity of Christ and the priest returns the gifts of the laity back to them, but transubstantiated.

The other comments make the liturgy into a horizontal event, something we do, rather than something Christ the Head of the Church is doing on His Body's behalf (all the baptized).

The PT crowd needs to understand that it is the head that governs the body, not the other way around. If they can't understand this, it is no wonder that they have problems with Humanae Vitae and the definition of marriage.

I agree with your sentiments for the most part Father, except for the part of the Offertory. The ordained priest doesn't receive the gifts from the faithful. He already has them. He offers them on behalf of the faithful.

Perhaps this is a nuance which seems minor, the offertory isn't about receiving gifts, it is about offering them.

Look at what the Suscipe says in the 1962 Missal. "Accept, O Holy Father, Almighty and eternal God, this spotless host, which I, your unworthy servant, offer to You, my living and true God, to atone for my numberless sins, offenses and negligences; on behalf of all here present and likewise for all faithful Christians living and dead, that it may profit me and them as a means of salvation to life everlasting."

This isn't about receiving anything from the faithful. That simply is a theological change in the 1970 Missale which states, "Blessed are you, Lord, God of all creation.
Through your goodness we have this bread to offer, which earth
has given and human hands have made. It will become for us the
bread of life."

The change now comes that the priest has received something from the faithful. The language of the priest moves from him offering something to entirety of those gathered doing so.

I agree that Fr. Wadsworth is pointing toward a more vertical aspect, but I think that we must recognize that the scope of the Offertory isn't that of the priest receiving anything from the faithful, but rather offering something he already has on our behalf.

Remember the the Suscipiat assumes this...we thank the priest of the offering at his hands.

To recover the proper sense of the Offertory will go a long way to properly undertanding the vertical nature of the Mass.

I had just visited that very PTB thread and considered those three perspectives, FRAJM, and lo and behold you nail the real issue over here.
The post VII dynamic tension between vertical/horizontal perspectives of ecclesiology nee liturgy have been around for a long time. I remember Bob Hurd bringing them up quite cogently over thirty years ago at a former parish inwhich I'd invited him to perform and address.
I wonder if it would benefit the "horizontal" camp if they would consider the proportionality of the cross and Corpus from both aesthetic and mathematical perspectives? In short order I summarize that we'd have to acknowledge that proportionality weighs heavily on the vertical axis, while acknowledging the importance that the horizontal axis is also compelling important in that the extended hands and arms of our Lord intersect the vertical at His Sacred Heart.
But the "you can't make this stuff up" seems to escape some PTB regulars by their reticence to accept the obvious. If they won't listen to reasonable and reasoned voices (whom they also generally disrespect) such as Fr. Barron about heirarchies' relevance not only to ecclesia but to the freaking cosmos, they're not going to listen to ALL of what Christ mandates in the gospels.
Off topic, if I can afford to come to Macon in January, how 'bout you put me up in the rectory?

I just saw on Fr. Z's blog that Bishop Morlino, of Madison, told his 32 seminarians that he expects them all to learn how to offer the EF before they are ordained!