OKAY, LET'S GO OVER THIS ONE MORE TIME, WHAT THE IDEAL REFORM OF THE REFORM OF THE ORDINARY FORM OF THE MASS WILL LOOK LIKE WITHOUT REVAMPING IT ALTOGHER OR DUMPING IT FOR THE EF ONLY, SINCE THAT AIN'T GOING TO HAPPEN 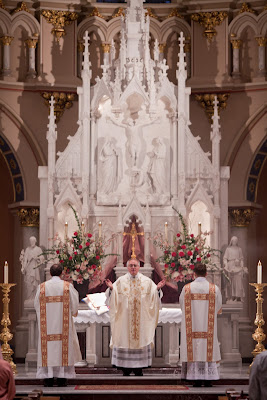 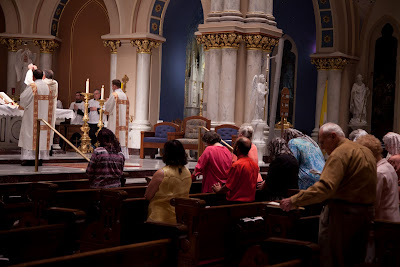 Now, what does a true reform of the Extraordinary Form look like which takes into account what was given to us in 1970, revised numerous times over the years, with a major revision in 2002 and a well received vernacular revision in 2011/12.

My presumption is that the 2002 Roman Missal will not change dramatically. I won't go into issues of the ratio of Latin to vernacular there should be. I'll simply go into the form of the Mass.

1. The Introit is the Entrance Chant, no substitutions. This is radical folks! The altar is reverenced and incensed and the priest returns to the foot of the altar.

Since in the EF Sung Mass, the Prayers at the Foot of the altar are seen as clerical and not properly belonging to the laity, I don't recommend their return to the Mass proper. Perhaps these should be required prior to the entrance of the priests and servers as their prayer before Mass. Many today do some banal, off the cuff prayers with the servers so why not do the Prayers at the Foot of the Altar with them prior to leaving the sacristy and prescribe it.

3. The priest ascends to go his chair for the Kyrie, Gloria and Collect with "The Lord be with you" and its response prior to the Collect.

4. The Liturgy of the Word as usual with the homily.

5. The Credo and Universal Prayers at the chair.

6. The Offertory Antiphon and the Offertory ad orientem using the EF's Offertory prayers and the Liturgy of the Eucharist Ad Orientem

7. The Communion rite as in the Ordinary Form with the Communion Antiphon beginning as the priest receives Holy Communion

8. The reception of Holy Communion, kneeling and by intinction

9. The Post Communion prayer, announcements and blessing and dismissal at the chair

I think this is a solid outline of what a reformed NO might look like. I would especially love to see the restoration of the prayers at the foot of the altar and a mandatory entrance chant. Let's just hope that your prediction is correct, that the Holy Father will issue some kind of liturgical direction for the Year of Faith.

6Glad to see that you have come round to the idea of the processional Introit replacing the hymn. If Introibo ad altare Dei is to be reinstated, it, together with the rest of the penitential rite, must be chanted in a sung Mass. What lets the OF down is not so much the texts as the almost universal manner of its celebration. Put back the traditional Offertory prayers by all means, but that won't stop Father O'Bubblegum personalizing the liturgy, addressing the Eucharistic prayer to the congregation, having women swarming all over the sanctuary (assuming there is one and it hasn't been re-ordered out of existence) and encouraging trite 'worship songs' and responsorial 'pop' Glorias in the manner of Marty Haugen; elements that will ensure that anyone with any feeling for the liturgy will stay well away.

Of course if it is make perfectly clear that the Prayers at the Foot of the altar are for the priest and ministers, then they can be done silently as the Introit is sung and the priest wouldn't ascend the altar until afterwards to kiss it and incense it and then go to the chair for the Kyrie, Gloria, greeting and collect. And while we're at it we'll restore all the silent prayers of the priest.

Yes, there should remain the two forms. The EF should be left alone. As for the OF, it is kind of a glass half full-half empty thing. Whether you call it the 1965 Missal with the 2002 Lectionary, or the 2002 Missal with the 1965 order of the Mass, the end result will still be the same thing, which is what you explained in your post. I can't wait. May it happen soon!

OOPs...looks like there is a new Gene here. Since you're the new guy, wanna' distinguish your name somehow?

Pre-Vatican II most people's encounter with the liturgy was at Low Mass, and many actually preferred it (including Evelyn Waugh. He was once attending a Solemn Mass at Farm Street when he noticed a priest and server approaching a side altar for a private mass and immediately joined them). Nevertheless, the norm was the sung Mass, either as a Missa Cantata or a Missa Solemnis. In the Eastern Church the Divine Liturgy is always sung, and those who compiled the NOM were thinking in terms of a sung rather than a said Mass.

If you attend a sung Latin NOM (and I've been to some where the two lessons and the Gospel were chanted in Latin) you are struck by the amount of singing compared with the EF. The Introduction and Penitential Rite as a sung dialogue, for instance, thus involving the people at the start of Mass (in the EF, unless there is an Asperges, the first sung response is to the Dominus vobiscum just before the Collect). The memorial acclamation (not that I particularly like it). The fact that everything from the Per Ipsum to the Agnus Dei is sung (the chant for the Quia tuum est regnum recalls the Te Deum). The sung blessing at the end.

The shortening of many of the prayers, and the dropping of the Roman PATFOTA actually make sense if you judge the NOM on its own terms, as a liturgy that is meant to be sung. And it doesn't even have to be in Latin - ICEL has done a good job adapting the chants to English words, and provides dtailed instructions for singing the orationes and the Lectionary. Permanent deacons and lay 'readers', get practising!

If the schola isn't up to singing the full GR propers (although Introits and Communios are fairly straightforward) there are easier settings, including English ones. The Responsorial Psalm settings of Arlene Oost-Zinner, the Simple English propers of Adam Bartlett, the Graduale Parvum (which is in Latin as well as English so could be used in the EF) are available for free dowlload.

A return to ad orientem would be desirable but will take a long time to implement, and in some churches is not possible without another reordering.

"Since in the EF Sung Mass, the Prayers at the Foot of the altar are seen as clerical and not properly belonging to the laity, I don't recommend their return to the Mass proper."
I would disagree with this. Whether or not these prayers are solely clerical, misses the important point that lex orandi est lex credendi. These prayers along with the sung introit introduce if not set the sacred character of the drama that is to happen next at the altar. They prepare the ministers to see their unworthiness to be at this holy place, the altar of God. They prepare the faithful who, seeing the humble ministers confessing and asking forgiveness before approaching the sacred altar of God, will experience with greater intensity the sacredness of the mysteries. Similarly, the Confiteor must be restored just before the faithful approach the altar area to receive communion, reminding them of their own unworthiness in receiving this Gift of God's presence.
In this respect, the communion chant should be sung after this Confiteor. Originally, the communion chant was sung while the sacred ministers went in procession to distribute communion to the people.