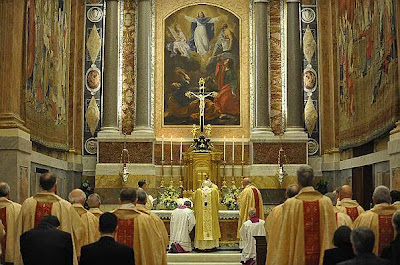 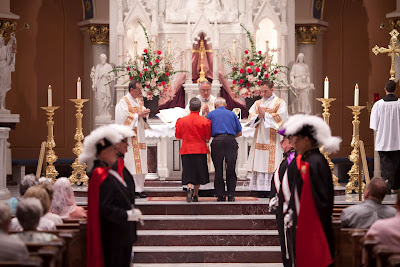 Father Z has a post on his blog, "Elements of the Extraordinary Form in the Ordinary Form" which produced a number of comments.

Of course many comments just focused on repudiating the Second Vatican Council altogether and simple restore the Extraordinary Form Mass as the Ordinary Form and suppress the current Ordinary Form. That, in my clairvoyance, won't happen.

However, Father Martin Fox, who concelebrated here in the Spring and has his own blog, "Bonfires of Vanities" offered the most sober comment of all and my clairvoyance tells me he is on target:

Well, we’re all friends here, so I’ll be the lightning rod. The reason not to scrap the Ordinary Form utterly is because there are questions of reform in the Mass, originally raised by the Council itself (please note I am distinguishing the Council documents from what came after, and then after that after).

I would argue that there are several reforms associated with the Ordinary Form, properly understood, worth preserving:

> Proclaiming the readings once at Mass, from the pulpit.
> Introduction of the vernacular as an option.
> Expanded lectionary and added readings (yes, I know some specifically dislike this; fair enough. I simply mean I think it’s worth defending).
> Prayers of the faithful as an option–properly done, you understand.
> Proclamation of Mass prayers aloud, and even sung as options. (Please correct me, but my experience has been that even with a Solemn High Mass, many of the prayers of Mass, currently proclaimed aloud, remain in a low voice, and are “overlaid” with other, sung prayers.)

Now, in no way am I dismissing the Extraordinary Form. But again, I think these are reforms that have merit.

And it all goes to the merits of the Council. I make a careful distinction between the Council itself and it’s misbegotten implementation, guided by an unclean spirit from who knows where. I take the Council seriously; it called for some reform. If you simply return to the older form, what becomes of that call by the Council? Is that not, in effect, a repudiation of Sacrosanctum Concilium?

"If you simply return to the older form, what becomes of that call by the Council? Is that not, in effect, a repudiation of Sacrosanctum Concilium?"

Of course this is a rhetorical question, and it has a perfect rhetorical answer:

"Proceed to reform the older form, organically implementing those prudential recommendations of Sacrosanctum Concilium that still seem appropriate. Of course, after forty years of experience with what went wrong, it may now be possible to see in retrospect what should be done now, as to what seemed good in advance a half-century ago, in a very different world and Church than we have now."

But, returning from rhetoric to reality, the Church has no realistic choice but to start where it is now, with a majority of both priests and clergy liturgically ill-formed--so that (whether it would be good or bad) an abrupt return to the older form simply is not possible--and then attempt by organic reform to return its normative liturgy to continuity with tradition, so that ultimately it will be fully recognizable (in both text and ritual) as a form of the traditional Roman rite.

So that brings the point that the 1965 Roman Missal accomplished all of what Vatican II called for. So why not keep the TLM as the EF, and make the 1965 missal the new OF, while supressing the Novus Ordo of Paul VI?

I remember reading, circa 1975, an article in a conservative Catholic periodical which contained the following statement: "All we are asking is that the Old Rite be given parity of esteem with the New". The implication was clear. A majority of the clergy had celebrated the Usus Antiquior on a daily basis, and all Catholics over the age of 25 had been brought up on it. Not all would want to return - the revolution had yet to run its course - but many were tired of the novelties of the past decade, and many had stopped attending Mass as a result. The existence of the good would throw into sharp contrast the bad and mediocre.

As we all know, the author's request has been granted; but it took another 32 years, by which time the landscape had changed utterly. What I would say is this. Don't change the OF, just celebrate it properly in English, Latin or a mixture of the two (much easier now we have a decent translation). Don't start tinkering with the 1962 missal. Time (and I mean decades at least)will tell.

When those of us who are traditional look at the Council, we don't see a hydra, but rather we see an attempt to do something that was never attempted. We see an attempt at the leadership of the Church to steer the direction of the Church in an overt way and in a way that had never been done before.

Ecumenical Councils were previously called to define dogma or to fight heresy or to clarify doctrine. This Council didn't attempt any of that. It didn't try, that wasn't the point, that wasn't an aim. To be totally honest, I think that John XXIII really didn't understand the purpose of an Ecumenical Council. Essentially what he did was to hold a consistory and call it a Council. If there was an idea floating around about calling a Council during Pius XII's time, I think that it wasn't to do what John XXIII did.

Now, we have had the Council. We can't change that. But what we can do is to properly understand it. And the liberals don't like that. They don't like the fact that we are trying to understand the Council. The liberals are still trying to couch the Council as something socially radical. To a degree it was, but not nearly to the degree they took it to following the Council. Paul VI lost control of the leadership of the Church following the Council. Many pass off Humanae Vitae as the reason he was ultimately dismissed. I disagree. There is nothing earth shattering in HV. It simply defines what the Church always taught. No big deal. What was truly defining for Paul VI is that he allowed his cardinals and his bishops to run wild with social change and he did NOTHING to stop it. He actually embraced part of it.

This is most evident in the most visible aspect of the Church, the Mass. The Mass went from being a solemn and High event, to being a shell of it's former glory. AND THE LIBERALS WANTED IT THAT WAY!! There is no disguising it. There is no justifying it. The liberals wanted the Mass to become exactly what it has become. A closed circle wherein the priesthood is redefined as a "priesthood of believers." When that took over, the whole theology of the Mass shifted and we now have what we have.

Taking back the Mass and "reforming the reform" cannot start with the Mass. Shocking to hear from me, I know...but it must start with a fundamental return to understanding the priesthood. When we realize that the ministerial priest has a different function than the faithful with regard to Mass and that he doesn't preside, but rather he is the one doing to celebrating, then and only then can we start discussing the Mass.

Also, I see no point in insisting upon a "reform" in the same way Sacrosanctum Concilium said. That was what was voted on in the Council back in the '60s. Hindsight being 20/20, I think it is best to preserve rather than tinker at this point. The people who wrote Sacrosanctum Concilium were diaticists and antiquarians-precisely the people who should never be given any sort of role whatsoever in any liturgical reform. The Pauline Missal is an amalgamation of faddish Liturgical Movement antiquarianisms mixed with New Theology didacticism. The expanded lectionary, the mutilated and disjointed prayers, the need to have added "eucharistic prayers" and all sorts of other things violates all liturgical orthopraxis and falls into the predictable camp of the Aufklarung Catholicism of late 18th/early 19th Century Germany, the Jansenists, Josephists, Neo-Gallicans, and Protestants.

Heteropraxis has become so widespread in the Latin Church that it is ridiculous, to the point in which many of us have come to believe that papal fiat is what makes something orthodox or not. It should be burned onto the heart and mind of every proper Catholic that the liturgy is not a project to mess with for each passing age to make it "our own". The liturgy is traditio-we need simply to pass on what we have received. Any alterations that should be made will take care of themselves, the work of progressivist egg head committees is the culmination of what Gueranger called the "anti-liturgical heresy".

I fully support that critique.

Thanks for the nice words.

I appreciate and agree with Mr. Edwards' observation, that we can't realistically do other than start where we are now.