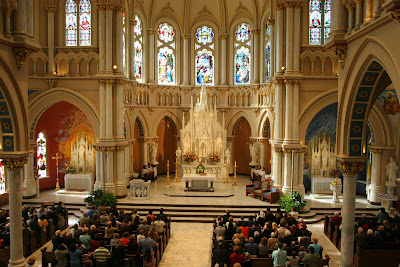 As you know, I've often touted that our current 2012 English Roman Missal have an Extraordinary Form Order for it, which would be using all the prayers, (except only the Roman Canon) and having the Prayers at the Foot of the altar recovered, and the entire order of the 1962 Missal, along with its offertory prayers. All the rubrics too, but still use the translated English Prayers, calendar, and additional Masses and prefaces of the 2012 English Roman Missal. I would recommend also maintaining the revised OF lectionary, but add the option of a gradual and/or tract in place of the Responsorial Psalm and to celebrate the Liturgy of the Word as in the OF, not the EF order.

But what about this, boys and girls?

What if we had an Ordinary Form of the 1962 missal and maintained everything in Latin from the 1962 missal's prayers, but in the Ordinary Form's order and rubrics including its lectionary and style of celebrating the Mass of Catechumens? Of course that means for the chanted Mass that only the 1962 Latin Introit would be chanted as the processional, with the Sign of the Cross, greeting, Penitential Act (only using the Confiteor of the 1962 Missal) absolution, Kyrie, Gloria and Collect (from the chair).

The offertory procession, with the OF offertory in Latin, but the EF's Offertory Antiphon.

Only the Latin prefaces in the 1962 missal and the Roman Canon but with OF rubrics.

Communion Antiphon as priest receives Holy Communion and the OF Communion practices for the laity.

Prayer after Holy communion from the 1962 Missal and the OF's Latin blessing and dismissal.

Nice to think about in theory, but this is why SP/UE made it clear about no mixing of forms. Each form needs its own integrity, in its own way.

The best option is to keep the EF "as is" until every child born after 2000 or so has had a lifetime experiencing it. In the meantime, re-connect the OF to its roots (as you and other great priests are doing).

At the end of that process (after we're all dead), the re-connection you're describing can probably be accomplished without much trouble at all. The belligerents (us) will all be dead, and most people won't be able to tell the difference, anyway. The change will be akin to the minor changes done in 1955, 1961, and 1964. No one but the specialists will take much notice.

I've come to believe that the failure of the OF lies less in its texts than in its rubrics (or lack thereof), because so much of the efficacy of proper worship lies in ceremony and actions rather than in words. Consequently, the EF text with OF rubrics and manner of celebration would still subject the EF to the defects of OF celebration which have been so disastrous for the faith of Catholics. Better to leave the EF alone, to serve as the model for reform that Pope Benedict evidently intends.

The OF text with EF rubrics seems a more feasible target for reform, starting where the normative liturgy is now; the rubrics could be emended in an organic way, without a massive rewrite of the prayer texts just recently implemented in good translation. The resulting Mass would be vastly more reverent and worshipful, but still would suffer from the superficiality of the OF lectionary--the flatness of the ABC cycle of Sunday readings, so deficient in depth and retained spiritual effect as compared with the memorable EF one-year cycle. Whereas if a saint or feast is observed almost every weekday with the more apt and carefully selected EF readings, then the deadening 2-year OF cycle of if-its-Thursday-this-must-be-whatever-comes-next readings is simply not needed--indeed, one could even now use the readings of a saint, feastday, or votive Mass on many more days in the OF as happens naturally in the EF, but apparently there are few parishes where this is done regularly.

There is a case for re-writing the GIRM and reinstating the rubrical gestures which were unceremoniously dropped in 1967. The 1965 interim Mass was still recognizably the Roman Rite (albeit mutilated) whereas the 1967revision was in effect a new rite of Mass, which is why the introduction of the NO in 1970 was scarcely noticed in most parishes.

You can celebrate the OF in such a way that it closely resembles the EF without departing from the rubrics. What I deplore is the attitude which may be summarized as "people should be exposed to the EF but it has to be vernacularized to make it accessible". Latin is the language proper to the Roman liturgy; it is a sacred language. English (or French or German or Spanish) is not. Preferences of either clergy or laity must take second place to this.

While I agree with most of what Henry Edwards says here, I have to disagree on the weekday OF lectionary.

Most of the opportunity to go to an EF is on Sunday, so many people don't get to experience just how bad the readings are during the week. There is no lectionary for ferias, so everything usually comes from the same half-dozen common readings of saints. There's a word for that, and it's called "impoverishment."

The argument for the EF Sunday lectionary is much, much stronger. Having a weekday lectionary truly is one of the authentic fruits of the Council. There is no doubt in my mind that this feature (much like the offertory procession) will be in the unified Roman Rite of the 22nd century we're talking about here.

Latin is not a "sacred" language. It is a language like all others, that happened to find a use in a sacred ritual.