MORE MUSINGS ON "THE ATTACK ON RATZINGER" 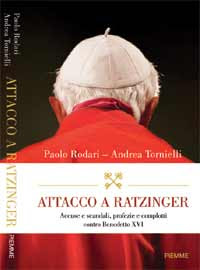 The Hermeneutic of Continuity Blog has this to say about comments concerning a new book on Pope Benedict's Papacy: (my take on it is below this)

Attacco a Ratzinger identifies three ingredients to the various PR crises that have faced Pope Benedict:

In the case of Summorum Pontificum, Massimo Introvigne notes:

What is at stake, as the authors justly note [...] is not only the liturgy but the interpretation of the Ecumenical Council Vatican II. Those who oppose the motu proprio defend the hegemony of that interpretation of Vatican II, in terms of discontinuity and rupture with the whole of the preceding Tradition, which Benedict XVI has tried in many ways to correct and undermine.

Massimo Introvigne points out that the various secularist lobbies against Pope Benedict have enjoyed particular success because they have been able to enroll liberal progressive Catholics; as he explains:

Interviews with progressive Catholics allow the media to represent their secularist propaganda not as anti-Catholic, but as a support against the reactionary pope who wants to "abolish the council," who is challenging its alleged "spirit", since the text of the documents of the council is not even known by anti-Catholic journalists and is considered irrelevant by their "Adult Catholic" fellow travelers.

Both Massimo Introvigne and John Allen highlight the way in which Attacco a Ratzinger has placed a spotlight on the failure of those who should be assisting the Holy Father to respond adequately to the dramatic changes in communication of recent years. The development of the internet through a combination of social networking and handheld devices has reduced response times to minutes. The Holy Father himself seems to be more clued-up about this than many of his experts.

For the past 2000 years, being a Catholic has been interesting. The governance of the Church has always intrigued the world. Today, however, because of the internet and instant communication, we have inside knowledge of the Church in a way that was not possible even ten years ago. The Book, Attacco a Ratzinger evidently hits the nail square on the head as it concerns Pope Benedict on three points:

#1 The liberal media and those in the world promoting a purely secularized world view hate this pope. Pope Benedict wants to "re-Christianize" Europe which has become the most secular of all continents. All of this has to do with sex: abortion, birth control, condoms, same sex marriage, women bishops, priests, deacons and shunting religion to the private sphere and out of the public and political square. To those who want all religion out of the world of politics, policy and law, the Catholic Church and perhaps Islam are the greatest threats. Catholicism with it moral power and Islam with its radical element of violence against those who oppose its ideologies. Thus you have the main stream liberal media bashing Pope Benedict every chance they get. The sex abuse crisis has given them what they think is the Church's Achilles heal and they have exploited it in a pit bull fashion.

#2 The progressive element of the Catholic Church, especially those in academia, hate Pope Benedict for what he did to them while he was the head of the Congregation for the Doctrine of the Faith. He dared to called to accountability theologians promoting theologies at odds with Catholic doctrine. Oddly enough, these theologians, such as Kung and others, used their position as official theologians with a perceived Church authority, in a different characteristic of clericalism which comes in two forms, that of being a priest and an academic theoglogian, to lead people astray through theologies not approved by the Church or in fact opposed to the Tradition of the Church. Cardinal Ratzinger called them to accountability and exposed their abuses. There is a connection between this kind of priestly and academic "clericalism" and priests who use their status accorded them of power, respect and honor to abuse their parishioners. The unsuspecting put their trust in them because they are priests and the abusing priests take advantage of the carte blanche trust accorded to them in varying degrees of evil against children, teenagers and adults. In dissenting Catholic theologians, the abuse is much more academic and thrives in an atmosphere of little or no accountability. Cardinal Ratzinger turned the cart over on that clericalism as he has on sex abuse clericalism. Related to number one, the liberal media uses dissenting Catholics as pawns in their quest to neuter the Church in the public square and undermine her mission to evangelize the world.

Tied to this internal dissent in the Church is Pope Benedict's reform of the Church and understanding of Vatican II within the context of the hermeneutic of continuity within our tradition, not rupture from it. The pope's allowance of the more liberal celebration of the Mass as it was before it was reformed after Vatican II and the stricter control the Vatican has taken over the reform of the Mass reformed after Vatican II, such as new translations of the Roman Missal in English and other languages, has angered a significant element in the Church, mostly Catholics, both clergy and laity now aging in their 60's and older, those who spearheaded the dismantling of traditional Catholicism in the 1960's and 70's based upon the hermeneutic of discontinuity.

#3 Pope Benedict is not served well by those who serve him, especially high ranking cardinals and bishops but also the public relations office of the Vatican. Here, the administration of the Vatican seems out of touch with the internet, the instant nature of news today and assisting the Holy Father in using the new media to the Church's advantage especially during a crisis. In fact, there may be those in the administration of the Vatican who wish ill on Pope Benedict because of his mission to bring Vatican II and the Church's ongoing reform into the hermeneutic of continuity not rupture.

While the specifics of what I write in the three categories above are different, there really isn't much new under the sun as it concerns the Church or even Jesus Christ in his public ministry. There will always be hostility to the Church, to God, to Jesus Christ and even the "smoke of Satan" will filter into God's Holy Church. Why should the current pope be any different?

#1 Jesus had to contend with the world and Satan. The Pharisees and Sadducees wanted to liquidate Jesus because of His hermeneutic of truth, not too much different than the secularists of today.

#2. Jesus had to contend with those who followed Him, but misunderstood Him or found Him altogether too much for them. Some of the greatest opposition came from those who could not stomach Jesus' teaching on the nature of the Last Supper (the first Mass) and that in order to live eternally, one must eat and drink of the Flesh and Blood of Jesus Christ. There was dissent already amongst those who followed Jesus.

#3 Jesus was not well served by the very 12 men, His apostles, who were meant to support Him in is public ministry, his administration, so to speak. What was Jesus thinking when he chose fishermen who had little or no formal education, made Peter the head of the Apostles when he would eventually deny Jesus three times and selected Judas who would betray him and then commit suicide? I suspect if Jesus had to contend with the media as it is today, the media would have had a heyday with it all. On top of that, Jesus is so inept He gets crucified, dies and is buried. But we know the rest of the story, not only for Jesus, but for the Church and all of us who remain faithful despite the set backs. This is Pope Benedict's faith and hope also

You are certainly right on the money, Fr. My comments are in the previous post regarding this below.

Excellent take Fr. Although in point 3, I think "seems" is an operative word. I believe the pope and the Vatican don't respond to the secular media because of there warped ideology of the world. A quick response only adds fuel to there burning desire to take down the only moral bastion left to fight the liberal agenda. But your comments are right on.

Based on this :"For the past 2000 years, being a Catholic has been interesting." you look good for your age.

More seriously The Internet has made it possible to see the volume of hatred that exists toward the Church. The modern Church is very poor at marketing and allows a great deal to go unchallenged. I recall this Pope, when he had not been in office too long, saying something to the effect that the Church may have to shrink to grow. Many of those who are supposed to serve him are failing to serve anyone but themselves.

I cannot help but believe that the ranks of the clergy will swell when manly men are priests. Sniveling backstabbers are never a good recruiting tool.

Fr., how many young men have entered seminary from your parish? I would think quite a few.

Good analogies. Particularly eye opening for me were your points concerning older "theologians" and their bias concerning Vatican II, its implementation and their resistance to Pope Benedict and his efforts to correct what went wrong after Vatican II. I could never understand how faithful Catholics could speak negatively about Pope Benedict but now understand that they many times don't have the best interests of the Church in mind. It is obvious that they are still promoting their liberal agenda. There is still the odor of the smoke of Satan in the Church (Pope Paul VI, 1972).

As the saying goes, "you know you're over the target when you start taking flak."

The ministry of Benedict XVI has gone straight to the heart of the Church's problems over the last 3-4 decades and it has enraged the liberals, modernists and secularists who thought the Church had been nicely put inside a box and the lid firmly tied down.

Fear not though, Father. Islam is coming! If Europe hates Catholicism and has abandoned the Church, it will just love Islam! When sharia is the law of the land in Britain, maybe......just maybe, the thought will enter the heads of the Pope-haters that they foolishly attacked the one organization which was capable of holding back the fundamentalist tide and preserving Europe's Christian heritage. Then again, maybe not. I fear some of the ant-Catholic mob are too far gone and are terminally obstinate.