GEORGIA CHURCH NAMED MINOR BASILICA--HAPPY AND SAD DAY FOR ME!

The Basilica of the Most Sacred Heart of Jesus, Atlanta! Congratulations!!!!! 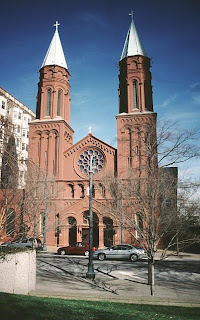 The "Basilica" of the Most Holy Trinity, Augusta, GA 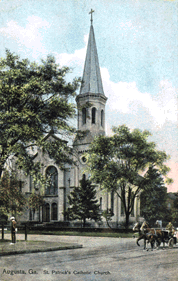 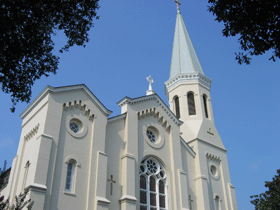 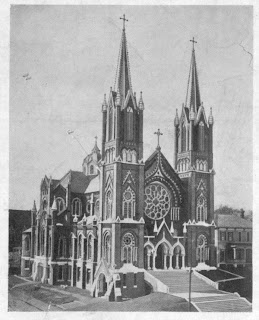 Sacred Heart Church in downtown Atlanta has been named a minor basilica! Congratulations to the pastor, the parish, the Archbishop who supported the cause, the United States Conference of Catholic Bishops who approved it and the Vatican which named it. You can read about it by pressing here!

When I was pastor of the Church of the Most Holy Trinity in downtown Augusta,(1991-2004) which is celebrating its 200th anniversary this year, I wanted to have our "new" Church with construction begun in 1857 and completed and paid for in 1863 during the height of the War Between the States or the War of Northern Aggression, whichever you prefer, named a minor basilica. The parish, which was very eager and willing to do all the hard work to present to the USCCB was thwarted in its grand plans. I won't go into the sad details.

The Second Bishop of Savannah, Bishop John Barry, who was pastor of the parish for more than 30 years and named the Bishop of Savannah and later laid the cornerstone for the new Church, but died before it was completed, had hoped to make the Church of the Most Holy Trinity the new Cathedral of the Diocese since Savannah was a hotbed for yellow fever, misery and death! His plans did not come to fruition. He is interred in an above ground tomb in the crypt of the Church of the Most Holy Trinity with about 12 other priests.

Compared to Sacred Heart Basilica, the Church of the Most Holy Trinity is older, grander and with a more colorful history spanning being a part of the Archdiocese of Baltimore at its founding, then later the Diocese of Charleston and finally the Diocese of Savannah. It could have been the Cathedral of the Diocese of Augusta! So sad!

And while I'm writing, St. Joseph Church in Macon is a good candidate for "basilicaship" too, although its history is not as storied as the Church of the Most Holy Trinity. It's architecture is grander and certainly significant for the area in which it was built. Maybe one day there will be support for two basilcas, if not three, if the Cathedral in Savannah applied for it, in our diocese. Time will tell!

Maybe one day I can answer the telephone at the Basilica of Saint Joseph in Macon by simply saying, "Basilica!" Oh what a happy day that will be!
Saint Joseph Church interior 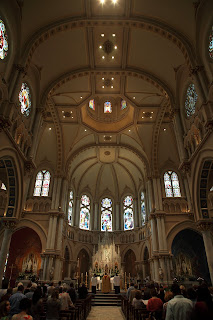 Basilica of the Sacred Heart interior 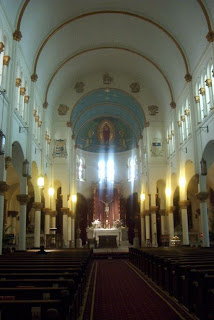 Church of the Most Holy Trinity Interior 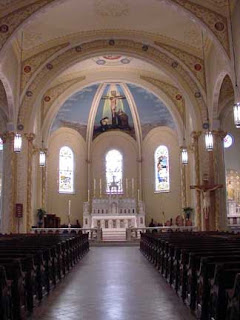 I attended Mass at Sacred Heart of Jesus a few weeks ago. The Celebration and Church were beautiful and I heard of there elevation then.
Sacred Heart of Jesus was the church for the old Marist Secondary school and College when it was located in downtown Atlanta. I attented Marist school in the 70's after it moved to the suburbs, a prep school then.
The stained glass windows at Sacred Heart of Jesus are from the Mayer Studio in Munich Germany, same as St. Joseph, just as magnificent. Both Churches are exquisite examples of most Reverant Catholic Architecture and giving all the Glory To God.

Congratulations to the Parish, Pastor and Archdiocese of Atlanta, that's quite an honor.

Looking at the Parish website I think the interior of the Church is at least every bit as beautiful as St. Joseph, although our exterior is clearly superior.

Thank you for adding the interior pictures to your post, Father!

I've never seen the interior of the Church of the Most Holy Trinity, Augusta, but I do like the altar railings. Adding those back to our St. Joseph Church would surely improve our already beautiful church! ;-)

Aside from the altar railings, I think St. Joseph has both these churches beat as far as aesthetics go!

Inasmuch as St. John the Baptist in Savannah is a cathedral, and since a cathedral outranks a basilica in its eccelsiastical status, why would we want the cathedral to be named a basilica?

That wold be akin to giving a pope the honorary rank of Prothonotary Apostolic. Doesn't make sense.

I find it sad that you take a happy occasion for Sacred heart to slight the church building and lament your fristration with prior decisions - is this Christ-like?

Anon, Fr. was not slighting Sacred Heart, unless an opinion regarding the various architectures is a slight. Many of us are frustrated with prior decisions; certainly it is Christ-like...He had opinions, too.