WHY DOES THIS MAKE ME FEEL SO UNCOMFORTABLE? 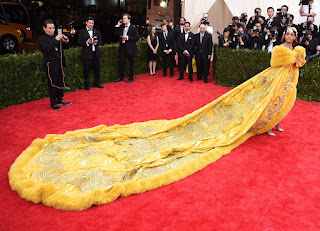 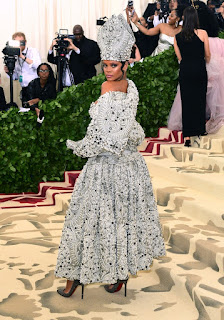 Don't get me wrong, I firmly believe that the Church should be the patron of the arts, but not when those who are artist mock the Church or her sacraments or turn art simply into a crass, worldly pursuit.

I can see where some alientation with the art community has taken place with Church music for the past 50 years, some of it thoroughly not artistic, and how we became iconolcalstic in destroying actual art in our churches after Vatican II and substituting commercial, assembly line junk, not to mention the horrible new churches that were built that have no artistic appeal whatsoever.

But do we have to do this to regain artists for the Church??????

Inside the Met Gala: Real-life cardinal gets star treatment

NEW YORK –  The annual Met Gala is known as a magnet for celebrities from Hollywood, music, sports, and of course, fashion. There were plenty of those this year, but also some interesting new faces grabbing the spotlight. One of them was the archbishop of New York, Cardinal Timothy Dolan. The real-life cardinal got some star treatment on an evening where all the other stars were trying to find the best way to channel the evening's theme of Catholicism and its influence on fashion. Strolling the museum's galleries, one could also find a former presidential candidate. Mitt Romney was there with his wife, Ann, and he pronounced himself thrilled to see the ornate objects on display from the Sistine ...
Read more
Posted by Fr. Allan J. McDonald at Tuesday, May 08, 2018

is that Kavanaugh in the middle pic?

Why does this make you uncomfortable? Maybe because this gala mocking the Church was staged "with the cooperation of the Holy See"?

And then there's the recent hi-level Vatican conference featuring Katy Perry, the "pop tart who made a name for herself with a bisexual song and a video about canibalism. During the conference, they passed out stuff of a new age theme tinged with satanism." Fr. Z has a picture today of one of these mementos.

How nice, the papal tiara next to a bondage mask covered in crosses. Thanks Francis. Mark Thomas defend the filth as usual.

The Met Gala 2018 was not staged to mock the Church, with or without the cooperation of the Holy See.

The theme was “Heavenly Bodies: Fashion and the Catholic Imagination."

If you look at the costumes, you will discover that there is much, much more to the gala than "mocking" Catholicism.

Many cultural organizations could stage a similar event for architecture, music, or literature. I imagine that many readers of this blog would be consternated by the writing of the very Catholic Georgian Flannery O'Connor, whose very Catholic literary imagination is, at times, rather odd and even bizarre.

Remember, some art is priestly, meant to calm and soothe and give one a sense of placidity. Some art, however, is prophetic, meant to be shocking and disturbing.

Maybe next year the Gala can "honor" Islam with a similar show. Probably won't happen because these gutless cowards value their heads

As an aside, I thought you lefties LOVED immigrants. I guess you didn't get the new memo:

Most of that didn’t seem very respectful, some of it blasphemous. Cardinal Dolan must have been drinking from the same bottle of Old Tolerance as Pope Francis if he thought it was good idea to support this event. Reminds me of the sex shops with faux clerical costumes in the window. I don’t think they are there as an endorsement.

What is it...the latest in Negro fashion?

Like Anonymous @ 11:59 a.m., I too would be interested in hearing Mark Thomas' critique of this most recent attempt at "new evangelization".

Dolan is a self-advertising buffoon. The model looks like Meghan Markle in her £100,000 wedding dress. God help us. Which will collapse first, the British monarchy or the papacy? It's anyone's guess.

"The theme was “Heavenly Bodies: Fashion and the Catholic Imagination. If you look at the costumes, you will discover that there is much, much more to the gala than "mocking" Catholicism."

I agree with you about Cardinal Dolan. Although I think he's fairly orthodox, he is buffoonish acting at solemn Masses, slapping people on the back like some Tammany Hall politician.

I do not see what the problem is. Th Church of England and its branch the Episcopal Church in the USA have been mocking the Catholic Church for years. Their reward: a pectoral cross handed over to the Archbishop of Canterbury and a request from the holder of the same 'see' for a blessing from current Pope Francis. Seeing the Catholic Archbishop of New York endorsing this event is not out of keeping with Catholic practice for the past half century.

I wonder what the exhibit is like, and if anyone mentioned that these were sacred liturgical arts. Also, it was the most outrageous costumes that got all of the press attention. Scattered among those gala attendees were some that did try to dress respectfully. One might notice that many of the men standing next to the women wearing those outrageous costumes were dressed in simple tuxedo's.

What filth have I defended?

I think you got your prophets mixed up. This show is more in line with Herod, Herodias, and Salome than with St John the Baptist.

“What filth have I defended?”

You defended Francis’ AL underhandedly permitting practicingnadulterers to receive Holy Communion without amendment of life, sacramental confession and absolution. You defended him laughing me smiling holding that filthy communist crucifix. You defended his silence while entire nations abandoned God and made sodomy into marriage. And let’s face it you had no problem with Francis’ Vatican participating in that freak show which was BLASPHEMY. You have bent over backwards to defend Francis and the chaos he spreads on a daily basis. You defend error. Therefore you defend filth in the Church. Oh and let me guess you are a big fan of Fr. James Martin and his errors. And let me make a prediction, when Francis’ phony synod abolishes priestly celibacy and agrees to bless gay “unions” which it will do, you will praise that also. Everybody on this blog knows you defend the filth and error that that old man in Rome is spreading. Somebody needs to grab him by the collar and kick him out of Vatican City and stop the madness.

Just to *really* wreck your day: Dolan will be voting for the next Pope. What could go wrong?

"You defended his silence while entire nations abandoned God and made sodomy into marriage."

Pope Francis did no such thing.

Pope Francis in January 2015:
"The family is threatened by growing efforts on the part of some to redefine the very institution of marriage, by relativism, by the culture of the ephemeral, by a lack of openness to life."

Pope Francis in February 2015:
"[...] I wish to express my appreciation to the entire Slovak church, encouraging everyone to continue their efforts in defense of the family, the vital cell of society."

The Novus Ordo sect is moving from heresy to overt apostasy. This is merely the latest evidence of its gracelessness.

These statements (from 2015; perhaps he, like Obama, has evolved in his views of gay marriage like the gay mafia running the German Catholic Church has) , without further amplification, mean nothing. To a liberal, having two mommies or two daddies is a "traditional" marriage. Santita should explain to the loons in the press and the heirarchy what he means when he says "institution of marriage." Is it between a man and a woman or some other combination.

TJM - So you would hold the same view of Pope Benedict's statement, "This is not a simple social convention, but rather the fundamental cell of every society. Consequently, policies which undermine the family threaten human dignity and the future of humanity itself,” wouldn't you?

Of course you would, but you will not go out of your way to deny it.

Anonymous said..."Oh and let me guess you are a big fan of Fr. James Martin and his errors."

All I know about Father Martin — based upon my daily search for Catholic-related news via Twitter for — is that "traditional" Catholics spew venom at him daily.

Thanks for the laughs. Here is Pope Benedict's view:

On Friday, Pope Benedict quoted Bernheim, saying that the movement to grant rights to lesbian or gay couples to marry and adopt children was an "attack" on the traditional family unit.

For Pope Benedict, the image of traditional family has not and will not mean anything more than a man, a woman and their children.

"Father " Martin is probably right up your alley!!!

Ugh.. too much pandering and not ANY teaching.

The venom I spew isn't because I'm a Traditional Catholic. It is merely because I'm Catholic and would like to see the clergy actually teaching the faith instead of treating the magisterium with indifference if not outright contempt.

Anonymous Kavanaugh, because Pope Benedict gets to the heart of the matter, that lesbians and homos can't marry, whereas PF never says that. Do you have reading comprehension issues?

It is not venom to publicly criticize someone who makes public statements that are erroneous. In fact, it is the duty of confirmed Catholics to do so.

"Do you have reading comprehension issues?"

None, but I also realize that one sentence does not constitute everything that any one person has said on any one topic.

"Pope [Francis] says marriage can only be between a man and a woman and ‘we cannot change it’ - article headline, Catholic Herald, 3 September 2017.

So we forced YOU to do a little research but I think PF, like Obama, the Abortion King, may have evolved!!! When are you going to resign from the priesthood and become a barista? If I were Father McDonald I would be embarrassed by having you as a "brother priest."