Aaaaah Orientem, a picture is worth a few words: 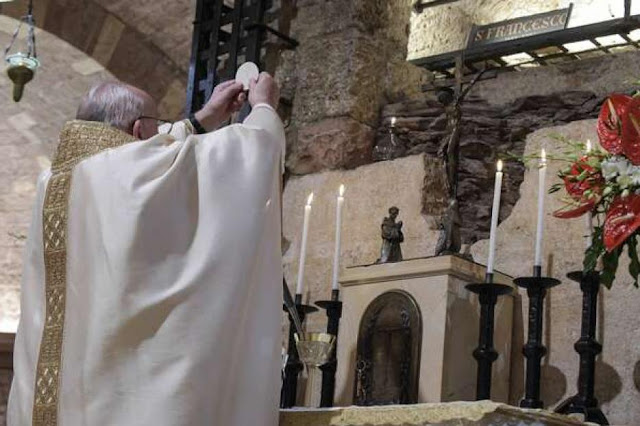 In years gone by, the sight of a pope celebrating Mass ad orientem would drive liturgical progressives apoplectic. But today one hears not a peep even from the Praytell people who are a sad group to say the least.

Has ad orientem gone viral? Is it now accepted as just another way to celebrate the Mass?

In my parish’s original church, which is now a chapel but seats up to two hundred, we celebrate Mass there exclusively ad orientem and we have a weekly EF Low Mass. When I first introduced ad orientem to the daily Mass congregation, I explained it and the reasons for it.

I had about three people object to it. They are my age and older and of course were formed in the post-Vatican II Mass in the 1960’s when I was. They like facing the people better. It is a matter of taste.

Since we started celebrating the Ordinary Form daily Mass in our chapel ad orientem, we have seen an increase in attendance even in these Covid-19 times. In addition to ad orientem, communicants kneel or stand at the altar railing, most kneeling though and with the option of Holy Communion in the hand or on the tongue, most on the tongue.