THE MOST IMPORTANT CHURCH DOCUMENT ANY CATHOLIC HAS 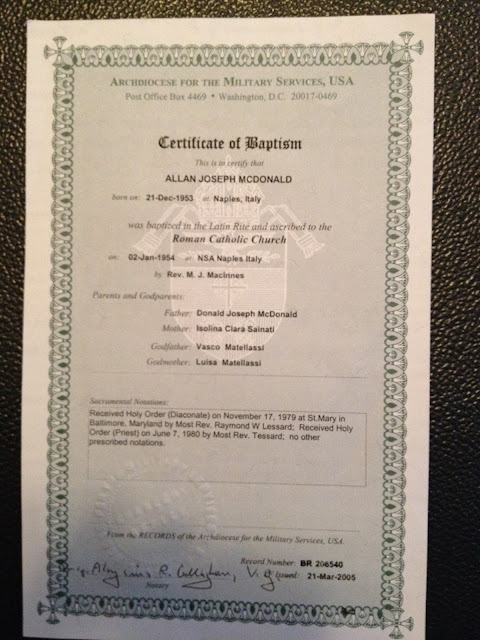 Did you stay in touch with your godparents? Mine were my first cousin, Mary Ann, and her husband, Tony. Tony died not long after, leaving Mary Ann with four small kids of her own. After they were grown, she became a Benedictine nun in Cullman, Alabama, where she still lives, now in retirement from hospital chaplaincy.

Unfortunately it wasn't possible. We left Italy toward the end of 1956. The Montalassi's were my mother's sister and brother-in-law, my aunt and uncle. They lived in Livorno and had to take a five hour train to Naples. I remember them coming prior to our departure for the USA from the Naples' port.

Of course my mom kept her sister informed of things in the USA and with the family by frequent letters.

Father McDonald, did your father speak Italian? Did your mother speak English prior to your family's move to America?

My father would have known no Italian and my mother absolutely no English. It is a mystery as to how they communicated to me but evidently not to him. I presume the Army must have had crash courses in Italian and he knew my mom's family very well and they liked him so he was forced around them to use it. My mother eventually learned English but always spoke "broken" English and a mix of Italian with it.

Father McDonald said..."My father would have known no Italian and my mother absolutely no English. It is a mystery as to how they communicated to me but evidently not to him."

It is interesting that each did not speak (at that time) the other spouse's language. But thing worked out for them.

Father, you have an interesting life.

Deo gratias for your service to Holy Mother Church.