OBSERVATIONS OF THE EF MASS FROM THE PEW 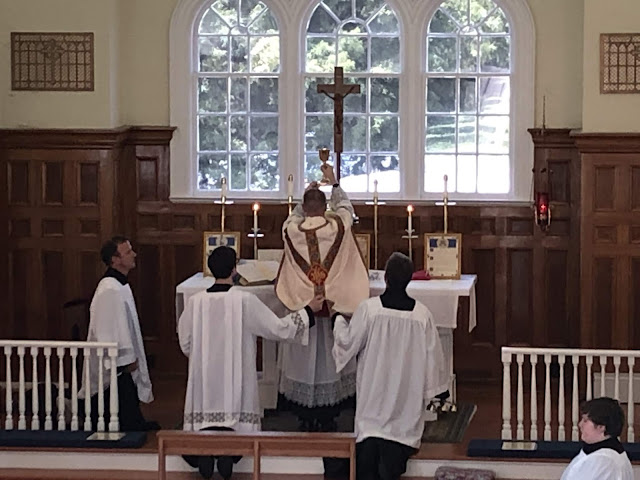 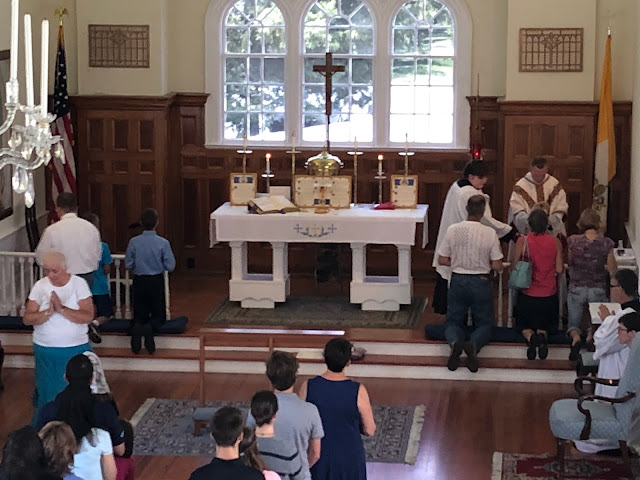 The last time I participated in the 1962 Roman Missal celebrated ad orientem was around 1966 when the 1965 Roman Missal was implemented in my parish in Augusta and facing the people. I would have been about 12 years old.

Yesterday, the Feast of the Sacred Heart with the 1962 Roman Missal celebrated by Fr.Patrick May in our St. Anne’s Martha and Mary Chapel was the first time I sat in the congregation and participated. Yes, I’ve celebrated the EF Mass as a priest since 2007 but never attended since that time as a “lay person.”

By the way, our Martha and Mary Chapel was built by Henry Ford in the 1930’s as a Protestant Chapel and he named it after his mother and mother-in-law, Martha and Mary, both of whom I presume were named after the saints, but which “Mary?” He and his family worshiped there also.  Our diocese acquired the chapel in the mid 1950’s to be St. Anne’s Mission. We became a parish in the 1970’s with a full time pastor. We didn’t have more than 80 or so families until the 1990’s when Richmond Hill began to grow. Today we have a new church that accommodates 1,200 people and the parish will double in size in the next ten years.

But I digress. Here are my observations of the EF Mass from the pew:

1. It has transcendence, reverence, mystery and awe now lacking in the Ordinary Form. What it has is strong rubrics, precision of ceremony, wonderful choreography and no nonsense. It does not rely upon the priest to carry it, meaning the priest’s looks, personality or creativity, what I would call liturgical nonsense.

2. It is contemplative almost to a fault for the laity. It is like attending Adoration of the Most Blessed Sacrament. It allows for the laity to zone out or be swept up into the mystery. For some so accustomed to the Ordinary Form’s busyness, the contemplative, adoration like nature of the EF Mass is disconcerting.

3. Quite frankly, I like the vernacular Mass because it makes the Mass accessible to the mind. A little Latin goes a long way for me. The first Sunday that some vernacular was allowed in the Mass when I was 12 years old was a wonderful experience for me and it made sense to have it in my mind! I see no reason why the changing parts of the Mass could could be allowed to be in the vernacular and maintain the fixed parts in Latin. This would enhance actual participation in the EF Mass.

4. Kneeling for Holy Communion is a no-brained to maintain reverence. When I knelt with others on either side of me and then waited for the priest (and our Lord) to process to me, which is really what I would call the Communion Procession—( the priest processing with Holy Communion to the communicant) I felt community with those on either side of me, that we were together at the altar railing. And receiving on the tongue and without saying a word, not even amen, made it an awesome moment of sacred silence! And I could wait brief moments after receiving to contemplate what Jesus just initiated in coming to me and the others around me in this intimate spiritual exercise.

5. This was a low Mass. I was in the choir loft and could watch the congregation. It was not clear to the congregation when to stand, sit or kneel. The majority knelt for the majority of the Mass including the Scripture readings. I’d like clearer rubrics for the Low Mass more in line with the High Mass. Stand when the priest arrives, kneel for the PATFOTA, stand for Gloria and Collect. Sit for the Epistle and Gradual, stand for Gospel, sit for homily. Stand for Credo, sit for offertory, stand for Secret, kneel of Sanctus, stand for Pater Noster, kneel afterward, stand for Post Communion Prayer, kneel for blessing, stand for Last Gospel and Recessional.

Finally, I love the Ordinary Form Mass celebrated by the book, with care and reverence. The improvements that local bishops should always allow should be ad orientem and kneeling for Holy Communion. In fact these two things should be encouraged and if bishops were encouraging these two things could revolutionize the celebration of the OF Mass as a spiritual treasure trove.
Posted by Fr. Allan J. McDonald at Saturday, June 29, 2019

Fr. McDonald: the English/Latin Booklet Missal is $5 on the FSSP website. (https://fraternitypublications.com/product/latin-english-booklet-missal/). They have same in Spanish/Latin. The margin has notes on postures bells, etc for Low and High Mass.

If the EF were allowed in (Your Vernacular here) would there be a need for the NO in your mind?

How 'accessible to the mind' would a vernacular Mass be if it was not your vernacular? As soon as large parts of the Mass were put into English there arose the problem of translation. In 1965 England and Wales were using a different version from Ireland, and in the USA it was different again. It wasn't long before progressive 'liturgists' were using translation to alter the meaning of texts. The French members of the International Theological Commission, which included Louis Bouyer and Yves Congar, were appalled when they read the official French version of the liturgical books. And we don't need to be reminded of ICEL 1973.

'I see no reason why the changing parts of the Mass could be allowed to be in the vernacular.' I assume you mean 'could not'. However, these include the sung Gregorian Propers which need to be in Latin. Even allowing the Epistle and Gospel to be read in the vernacular only at Low Mass is problematic, although SP allows it. The old hand missals give the Douay-Rheims version (ed. Challoner). But the priest can now choose from several permitted versions, including RSV (Catholic edition), NAB (in USA) and the dreadful Jerusalem bible (England and elsewhere).

Faced with the choice between a Low EF Mass and a sung Latin OF Mass, I would plump for the latter, despite minor irritations. I know of no-one who would want to attend a Low EF Mass in English, and plenty of people who would avoid it.

Look closely at what happened to the liturgy after 1965, and be careful what you wish for.

The problem is the infinite number of options of language and rubrics. The culture of the Mass is anything goes and does. It can never be restored until we all pray the same way so as to act out our "unity" which Pope Benedict XVI seems to prize above all.

Postures as far as the congregation are concerned are not laid down. They are subject to local custom. The Low Mass habit of kneeling has unfortunately carried over into the Sung/High Mass which should be the norm. Be that as it may, I have never seen an EF congregation, then and now, kneeling during the Gospel.

Hilaire Belloc, at Westminster Cathedral, maintained the French custom of standing for the elevations. An officious verger tapped him on the shoulder and reminded him to kneel. 'Go to hell!' said Belloc. 'Im sorry', replied the verger, 'I didn't realize that you were a Catholic.'