WHAT MESSAGE DOES THIS “FLEXIBILITY” SEND? SCRUPULOSITY = RIGIDITY; NO SCRUPLES = FLEXIBILITY? IN THE MORAL LIFE IS IT BETTER TO HAVE SCRUPLES OR NO SCRUPLES?

My two seminarians for the summer, the marine and the convert both attend Mt. St. Mary’s Seminary in Emittsburg, Maryland. It is separate from the liberal arts Catholic university but on the same campus. The seminary is orthodox and the university is too, although it appears under its current management secularism is becoming the meme.

It just so happens that the University alumni magazine was delivered to our rectory in Richmond Hill for one of our seminarians. And in it is this photo: 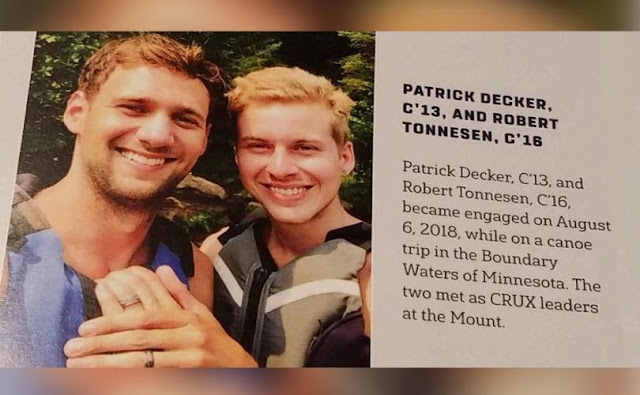 You can read the Lifesite article HERE.

As you can imagine many of the alumni are outraged and the seminary staff and seminarians are likewise.

Does accompanying public sinners mean acquiescing to that which is opposed to divine law even revealed to all in natural law? Why are Catholic institutions unwilling to be martyrs for the Catholic Faith and call this kind of thing out?

Or is there a desire to poke the Faith and Morals of the Church of God in the eye? Is it the ultimate form of the deadly sin of pride which Adam and Eve committed?

Perhaps it was a low level decision made by someone on the magazine’s staff and the higher ups simply did not proof it before it was printed and mailed?

And now this couple is victimized when all that needed to be done was not to list their engagement and only list engagements of those whose upcoming marriage is of God and under the canons of the Catholic Church.

The seminarians are OUTRAGRED, I tell you, OUTRAGED! Stand back, everyone.....

The relentless drum beat goes on. Our church, from the top down, is acquiescing and is therefor complicit in enabling what society wants to be inevitable. Holy Mother Church is NOT the bulwark it once was and is increasingly slipping into an acceptance of a state of moral relativism not unlike what we see with Unitarians. The drumbeat seems to be this: 'If I'm a strong social justice warrior, I can be excused from standing firm on the essential tenets of the one true faith because, after all, this is more important'. I believe this is the thinking that permeates the Catholic voter which allows these people to hold their nose and continually vote for those who are in direct contravention of the church but who claim their Catholic Faith...aka Joe Biden and the rest of his ilk state after state (RI, VA, NY, CT etc.)

The question of the hour: What precisely does “accompany” mean? It is the new progressive PC buzz-word in the Church promulgated by ... (fill in the blank). Its meaning/interpretation is vague and can apparently include whatever one wishes. Our Church, in its current version of free-fall, refuses to correct and will therefore continue to suffer the consequences. If this is “evangelization”, count me out.

Even though this young handsome couple will be entering a sinful public relationship, at least according to the teaching of our faith-based school, we wanted to share their joy and ours

"Accompany" is hardly a "new progressive PC buzz-word. It may be new to YOU, but it is not new in Christianity or Catholicism.

Jesus accompanied the widow of Nain, the couple whose wedding he attended in Cana, Peter who denied him three times, and Cleopas and the unnamed disciple on the road to Emmaus.

His accompaniment was for comfort for the grieving, teaching for the ignorant, forgiveness for the sinner and eternal life for those who die. He accompanied them to Calvary and beyond.

Does accompaniment, as in the photo in this Catholic institution's magazine mean celebrating that which is opposed to God's laws concerning marriage? Do they even think it is a sin, an affront to the Church of Christ and to her Head? Do they want to be led to conversion and chastity and be accompanied on that path, to live as brothers without physical sexual intimacy???????

Anonymous Who Uses the Definition to Suit Himself, deliberately missing the point is not a display of intelligence but of immaturity. Deliberately using a given word differently than the original usage does not display intelligence but a lack of it for not knowing which word usage was in effect. These posts of yours are not forensics where we attempt to reach a common understanding but merely evidence that not everyone can follow the argument. Offering clarification would be nice. This mentality brings to mind people who break into secure networks claiming they are helping identify weaknesses but also do damage. That is merely a vandal too cowardly to write his own name on the wall.

Please at least offer a helpful clarification if you think you have discovered something to comment about.

JDJ has decided that the picture and story represent "accompaniment" as Pope Francis uses the word. I think he's completely off the mark, about both Pope Francis and accompaniment, and that he has used this picture from a university magazine to vent his spleen.

Fr. McDonald has followed suit, taking up where JDJ left off and increasing the intensity of the rant!!!!!!!!!!!!

When the "pope" and cardinals and bishops, and occasional priest, are no longer saying anything remotely Catholic, and avoid anything that might "offend" anyone, can one expect anything else?

I never mentioned “Pope Francis” in my post, nor did I rant. I asked a question that begs an answer. I think FRAJM made a very reasonable attempt at an answer with no ranting involved.
Now, another question: Exactly who is using this thread to “vent his spleen”?

JDJ - I understand that you do not consider your post to be a rant.

"It (accompany) is the new progressive PC buzz-word in the Church promulgated by ... (fill in the blank)..."

No, it's not a new word of concept in the Church. "Promulgated by... (fill in the blank)" is loaded with suspicion and innuendo.

"Its meaning/interpretation is vague and can apparently include whatever one wishes."

No, it's not. Many are less comfortable with accompaniment than with commanding the sinner, taking the sinner to task, making a public example of the sinner. That last is what the "holy" people did with the woman caught in adultery.

"Our Church, in its current version of free-fall..."

Seems more than a little hyperbolic to me. No one, myself included, denies that we are facing difficulties. But we always have. The Halcyon Days of the past always look good in comparison to today's situation, but, I would suggest, may not have been so peachy.

And I'll go back to another thing I said. Where does the idea that the photo and wedding announcement constitute "accompaniment" come from?

I personally know one of the young men who is pictured. It breaks my heart to see this fellow whom I have known since his teenage years become involved in this destructive relationship. The university had no business including this announcement in its alumni magazine as it is a tacit endorsement of the homosexual lifestyle which still is and always will be a sin that cries out to heaven for vengeance.

Anonymous, we disagree,
I’ll pray for you, you pray for me.

I've never been to a 'gay' wedding (nor would I) but am intrigued by certain aspects, particularly concerning the manipulation of language.

How is consummation defined?
Why does the law have prohibited degrees of 'gay' marriage since incest is no more or less immoral than homosexual acts, and there is no risk of inbreeding?
Who decides who is the husband and who the wife? Or can both be husbands or wives? I can't see the registrar saying 'I now pronounce you shirt-lifter and pillow-biter'.
How long will it be before someone is allowed to marry his or her dog? There's no logical reason why they shouldn't.

Dang, John. Now how do I get those images out of my head?

ake catholic priests who vote Dem love this stuff. They will really hate that the Ninth Circuit agreed with the most prolife president evah (Trump):

You will be very proud of the Archbishop of Indianapolis banning a fake, Jesuit high school the use of the term Catholic.

I can’t get the images out of my head of John Nolan lying awake at night, tortured and conflicted, wondering about consummation and who’s husband and wife, pillow biting and shirt lifting, maybe even marrying his dog. Things that a normal healthy person need not obsess over. Other people have their private lives — male, female, gay, straight — and you are not required to understand or to approve. You are required to keep your hands off Lassie.

That is because you, Anonymous, don’t use th word sarcasm properly. It is the gulf between you and comprehension.

rcg,
The Anonymous here (exception is Anon 5:02, of course) is on a “rant” and determined to “vent his spleen”. It is always sad to see this behavior on Catholic blogs, particularly this one, but unfortunately not uncommon. Arguing with someone like this only exacerbates the problem. No reasonable, thoughtful, productive dialogue can occur, as you succinctly pointed out in your 12:27 post.
Prayer is needed and required for this individual.

Back to the question that spawned all this: Exactly what does it mean to “accompany” in our Church (as opposed to SECULAR teaching)? What really is required of us...What is not required? It has become a thorny, confusing issue for many Catholics I know, and we ALL know who/what is the architect AND promulgator of confusion. With whom do we cooperate—the Author of Life, or the author of death? Emotions aside, true dialogue about that term “accompany“ might prove productive and helpful. If not, I promise not to ask again.

Actually, I don't give a flying fish what perverts get up to in their private lives, as long as they don't frighten the horses.

Asking questions hardly amounts to 'obsessing over' anything. Also, I suspect he means 'being obsessed' (passive voice) rather than 'obsessing' (active voice). But, as I have been at pains to point out many times on this blog, correct use of English is not Anonymous's strong suit.

"Accompaniment" is written of in this paper nu Hand Peter Kolvenback, SJ.

Wow. Someone needs a nap.

Rote recital of fatuous cant doesn’t make one anybody’s intellectual superior. The proof is thinking for yourself.

BTW and FWIW, I learned a long time ago to avoid reading Jesuitical “teaching”; “America” magazine forever dispelled the myth in my head that Jesuits could lead us forward, despite their former zealous missionary accomplishments.

JDJ - Hence, you will remain ignorant about what accompaniment means. I would suspect that, in your ignorance, you will continue to complain about the concept.

Anonymous D are you Dollar Bill and Anonyous K? Your fatuous "response" would seem to confirm my suspicion

Anonymous gets more incoherent and illogical with every post. I don't know what convoluted mental processes produced the comment of 10:37 yesterday, and I'm not sure I want to.

As for 'rote recital of fatuous cant', there is a contributor to this blog who routinely, repetitively and at inordinate length regales us with this, and it's neither I nor Anonymous. I have taken him to task on another thread with no real hope that reason will prevail.

Anonymous D: John, I think we all get that you don’t understand the reaction to your post because you really understand the meaning of what you posted. Most members of this group, I gather, are cloistered & real-world challenged & rarely have encounter the issues they post about. Perhaps you felt that musing about consummation & who’s husband, who’s wife, was just charming small talk. I see much the same when racial issues come up here. Sometimes humor doesn’t always travel well. No offense taken. Carry on.