AHHHHH ORIENTEM IN THE RUINS 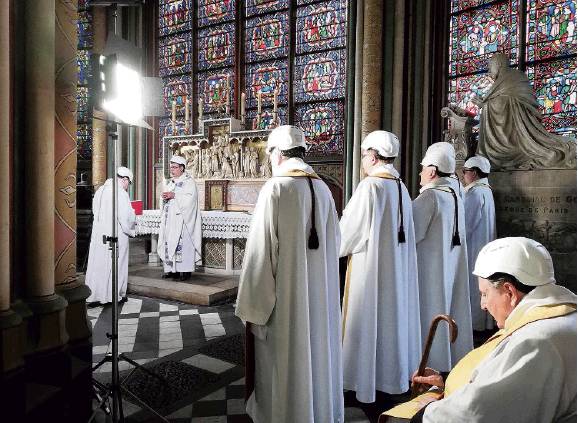 Our Lady, Notre Dame in French, likes this way of Mass, although the hard hats are a bit much. WHAT SHOULD BE ABUNDANTLY CLEAR IN THE VIDEO IS THIS ODDITY THAT EXPLICITLY SHOWS HOW FACING THE CONGREGATION TURNS PRAYER, BE IT CHANTED OR SPOKEN, INTO A PERFORMANCE:

For some stupid ideological reason, the Archbishop faces the congregation for the Prayer over the Offerings, with his back to the offerings, completely absurd! Then he performs the Preface still facing the congregation! Really dumb.

But note how Liturgy actually becomes so, meaning Sacrifice/Worship/Prayer, when the Archbishop turns to the altar, lays aside his clericalism and humbly prays facing the same direction as those behind him.

And a nice touch to remove the hard hat for the consecration!

Crass stupidity. We saw it on the news last night and had a good guffaw.

The liturgy at ND de Paris has been appalling for the past 50 years. Only the organ saves it.

This applies to most churches in Paris. There are one or two notable exceptions, if you go out of your way to find them.

I think you will love this article at the New Liturgical Movement today where Dr. Peter Kwaskiewski refers to Communion in the hand as: A Marxist economic exchange!

The article also debunks the false history for this pernicious practice favored by liturgical lefties. So much of leftism is built on lies, both in the religious and secular spheres.

You kind of wonder if a hard hat really would offer much protection from a fast-moving piece of debris---but I guess better minimal protection than none at all.